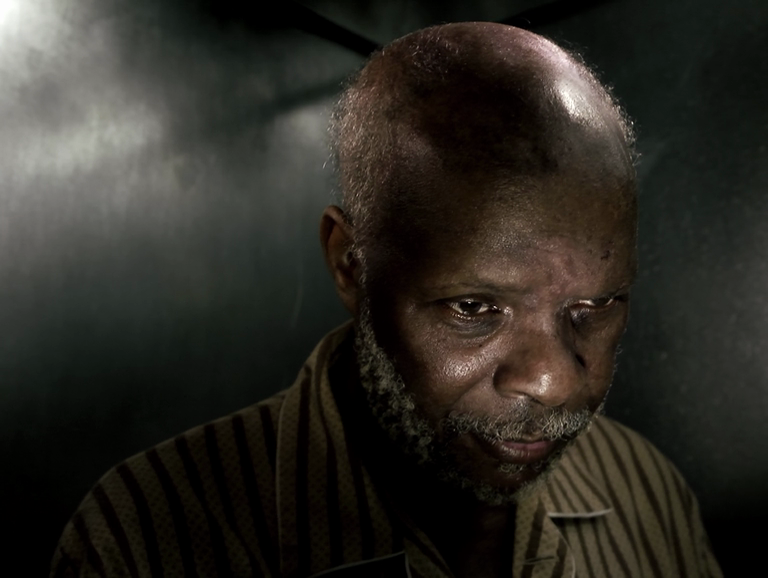 It’s kind of sad that you have to wait almost two years for a brilliant film to cross your way. I missed Pedro Costa’s new film in Locarno, because I saw Lav Diaz’s From What Is Before (2014). That was my only chance somehow, because it has never popped up around me. I regret not having seen it there and then. Pedro Costa has convinced me with Horse Money

, perhaps even made me a fan. When I saw Colossal Youth

a while ago, I couldn’t really get into his work. Cinematographically it was beautiful, but I had issues to follow the narrative. Now, my having matured and having a more in-depth view on themes such as colonialism and the trauma that comes with it, I want to revisit not only Colossal Youth. I also want to see as much of his other films as I can. There is something very attractive about it, very engaging, very enveloping.

Three words which are embodied by characters and film style alike. Costa plays on temporal disorientation. Ventura, an elderly man and Costa’s muse, if you wish, speaks of the past as if it was present. He says he is 19 years and 3 months old. When asked whether he is married, he looks at his ring finger and hides it. He walks repeatedly through dark, endless corridors. Passages to the past, passages to memory.

Horse Money is situated on the threshold between life and death. We can never be sure whether the characters we see are alive, a result of a dream, a hallucination, or a simple memory. To me, even Ventura himself was a phantom, a man of ghostly presence who is removed from reality. And so was I. A curious effect I had never experienced with a film before – I felt removed from reality. I felt as though I saw the film from outside my body. The ghostly appearances of the few characters we meet, their almost constant whispering, their positions in dark, shadowy places – I wasn’t really where I thought I was. Where was I, then?

I’m not sure where Horse Money took me. I know that it hit certain spots. Trauma is one of them. I studied Diaz’s representation of post-trauma back and forth, and Costa’s is an entirely different, yet very effective approach. Ventura is paralysed. He’s living in a temporal loop. So are his friends. His shaking hands are indicative of shock, which, it often seems, he has lived through only a few minutes earlier. The date mentioned, however, is 11 March 1975, the day a coup attempt was beaten down by the Portuguese military government. It feels as if it was yesterday.

Ventura enters his former work place, a building in ruins. Everything is shattered. He speaks to his boss who is no longer there. He dials numbers on broken telephones. It is an errie atmosphere. The past is well alive in Ventura’s mind, but not in Costa’s screen images. This discrepancy is startling throughout the film, and causes the temporal and spatial disorientation I was speaking of earlier. Above all, however, it is an image of people reeling from trauma. It is an image of paralysis, perhaps most obviously embodied in a single image: that of Ventura, naked apart from his red pants, standing in the streets at night, surrounded by soldiers and an armoured vehicle. He lifts his hands.

“You died a thousand deaths, Ventura,” a friend says. Horse Money feels like the end, but it isn’t. Ventura, struggling with what he calls a “nervous disease”, will die many more deaths before he can break out of the circle of history, memory, trauma.