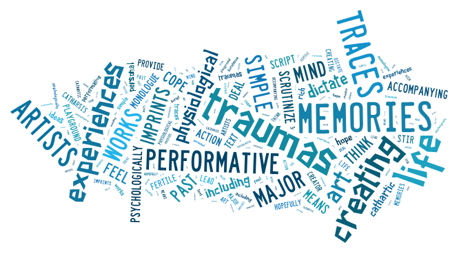 In a previous post I mentioned my own personal experience with slow films in the context of post-traumatic stress disorder. Given the comments I had received after publishing that specific post, it seems as though I’m not the only one who, consciously or unconsciously, uses or used slow films in order to calm down, to soothe, to work through traumatic events. Slow films allowed me to breathe. They gave me the chance to think, to take my time, and, most important of all, to “realise”; realise what is happening in front of me, something I couldn’t do in real life at the time because my senses were repeatedly overstimulated. You can read all details about the link between Slow Cinema and trauma here.

In my post-PhD life I’m discovering more relations between slowness and memory, and I find the role (cinematic) slowness is playing in regards to working through trauma increasingly intriguing. It started off with my finding a theatre play by the Belgian theatre group GROUPOV. Just imagine, a five-hour theatre play about the genocide in Rwanda, with the beginning nothing but a forty minute long testimony of a genocide survivor. The sheer overall length of the play exceeds public expectations. It is not a theatre play you go see to entertain yourself. You go there, perhaps, because you feel a responsibility. Or because you’re simply interested. But you certainly don’t go see this in order “to have fun”. Now, this five-hour play stunned me. I watched parts of it on YouTube and read whatever I could about it. It made waves when it premiered in Liège, Belgium in 2000.

In the context of the genocide in Rwanda (1994), scholar Alexandre Dauge-Roth has proposed a thoroughly striking argument, which I couldn’t help but link to (cinematic) slowness or long duration. Dauge-Roth argues that cultural expectations may silence victims of genocide, war, and other traumatic events. This isn’t just about state-sponsored trauma and terror. We’re also speaking of individual trauma; sexual abuse, rape, attempted murder, loss of family members etc

For the sake of length (what irony!) and because I’m working on an article on this subject, which prevents me from going into too much detail, I’m simplifying the argument here. Most vital in any case here is that we have very much grown used to the way stories are told. Just take the resistance to long films such as those by Lav Diaz. We are not used to films of six hours running time or more. A nice, concise ninety minute film is just about right. Make it two hours at most. Already at school, I was taught that a story needs to have a three act structure, with an introduction, a climax and everything. These are standard characteristics of narratives, even today, when arthouse films try to break through this tradition.

This tradition is exactly what may silence victim-survivors, argues Dauge-Roth. He doesn’t mention long duration as such. But it becomes clear that this is one vital characteristic which is missing in current representations of trauma. It was a major force in my work on Lav Diaz and his treatment of post-trauma on-screen. Then there was the theatre play, and Wang Bing’s three-hour film Fengming. Interestingly, they all take their time in exploring trauma. They allow victims to take as much time as they want and need.

Of course, for everyone who has been through a traumatic event, the experience is individual. I cannot oversimplify and approach every traumatic text in the same way. However, there seems to be a relation between films of long duration and the investigation of trauma. The problem we face nowadays is that the tradition of storytelling challenges (post-)trauma. Trauma is a-temporal. It doesn’t follow a linear narrative. Nor is it necessarily something you can squeeze into a nine-minute film. Nor does it follow a typical three act structure. Traumatic events are remembered in the time the survivor needs, and in a fashion that the survivor finds appropriate. This very often clashes with people’s expectations; it clashes with standards, with traditions, and is therefore often rejected by listeners. As a survivor you can tell that your story somehow “doesn’t fit”, which may lead to being rejected…which overall causes a silencing of the traumatic experience in public discourse.

I not only generalise here. I also use my own experience, having had to tell people in every single detail about what happened to me a couple years ago. This took an immense amount of time, and wasn’t at all linear. I think my way of remembering defied all classical structures, which is why a lot of people turned their back on me. We have created a net of tight expectations as to what is allowed and in what way we should tell our stories, or in what way we should write about it, or even make films about it. This adds to the already suffocating life of trauma-survivors. To me, personally, Slow Cinema or films with long duration, directors who engage in those films, are those who alleviate this silence, who can genuinely contribute to cultural memory, and this is exactly where I’m headed with my new project – the clash between expectations and silencing, and how artists can intervene, and the ways in which duration can tackle the silence imposed by society. Very excited by this actually!

The spirit of plastic arts

Leave a Reply to Joel Cancel