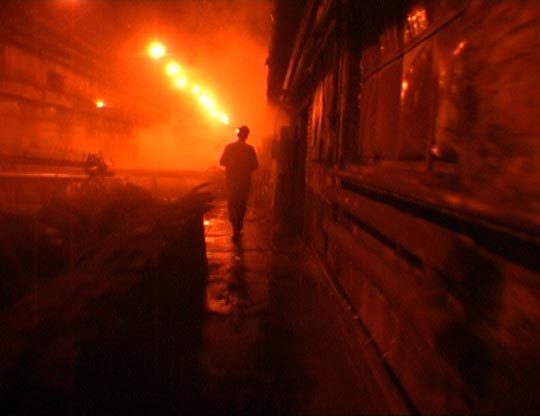 If you hear people speaking about Slow Cinema, or see lists of films that are usually considered to be part of this genre or this movement (whatever it is), then you will hear or see the name of Wang Bing and his exceptional film Tie XI Qu (West of the Tracks)

. With a running-time of nine hours, it’s not his longest documentary. Crude Oil tops this with an extra five hours. If there is something that characterises Wang Bing’s films, and this can be partly seen in the lengths of his films, is that he spends a lot of time with the people he films.

West of the Tracks is a cinematic document about the collapse of the industrial complex Tie Xi Qu at the end of the 20th and the beginning of the 21st century. Filmed between 1999 and 2001, Wang Bing follows the lives and work of primarily temporary workers at factories that will close in the near future. In several segments we are told by the workers that all permanent, full-time employees have already left the factories because they were no longer being paid. What remains are groups of temporary workers, here and there. Spectres. Just like the run-down, half-empty, half-demolished parts of the factories. Wang Bing’s film is a film about absence-in-the-making. Until the end of the 1990s, over 50,000 people had been employed there. Tie Xi is both workplace and living space. Both are disappearing in front of our eyes, and so are the people.

Rust, Remnants, and Rails – the three parts of the film – each focus on their own little cosmos, each part tying the knots a bit tighter on the people who try to make a living, or to simply survive. Rust is the longest part of the film and divided into two parts. The part’s four hours running time takes us through the happenings of a smelting plant, an electric cable factory, and a sheet metal factory. This part, in particular, defies the usual characterisation of a slow film being quiet and peaceful. Wang Bing’s film is anything but. If there is one thing that stood out for me personally, it is the sound track. There is a constant noise in the background. The noise in the factories is almost deafening. Only the electric cable is a bit of a respite to what Rust usually shows us. The colours are mysterious, and, partly, reminded me of Mauro Herce’s Dead Slow Ahead, which I reviewed on this blog a little while ago.

Rust is about the factories themselves. Wang Bing follows the workers in several scenes, but the focus remains persistently on the factories, which we enter and exit via lengthy train journeys with the camera attached to the front of a train. These journeys made me think of the first traveling shot in cinema; a hallucinatory journey through empty places and a sort of symbol of Wang Bing’s film. The director records the men at work, revealing the disregard of any safety procedures. Money is what counts. The workers have no value unless they create (monetary) value. Their health and their safety count for nothing. Rust is a document of capitalist exploitation, taking place in a communist country that refuses to acknowledge publicly that it, too, has been seduced by the ideas of capitalism and consumerism, and that their people have to suffer as a result.

West of the Tracks wasn’t made with official blessing. It was shot clandestinely, helped by a small digital camera the director used. This film wouldn’t have made it past the state censorship, like all of Wang Bing’s films. He films what doesn’t exist officially. He writes the stories that have officially never happened. He films the flip side of the country’s enormous boom: the extreme poverty of parts of the population, the exploitation of the workforce in absolute disregard of their health and safety, the rehousing of people against their will, the frank neglect of everyone who does not belong to the top 1%.

Remnants and Rails show all of this in poignant ways. Remnant is set in Rainbow Row, the housing complex that is part of Tie Xi. In contrast to the first part of the film, Remnants is a more intimate portrait of the people who suffer from the collapse of Tie Xi. This is no longer just about the workers, but about their families. Rainbow Row is destined for demolition. The people are promised a new house if they sign up for it by a certain date. Several of the people we see in the film, however, refuse to do so, and risk being homeless once Rainbow Row is getting demolished. What becomes clear in the discussions between the people, which primarily take place in the local shop – a sort of gathering point for them because it has everything, even a telephone – is that the local councils attempt to trick the people, drastically reducing the amount of compensation they will pay to those who lose their jobs or giving them a much smaller flat which does not offer enough space for a family. As a result, some people refuse to leave their house, a protest that leads to their being cut off from electricity in November 2000.

In some ways, Remnants is a look into the future, albeit it is set in the present. Wang Bing focuses primarily on a group of youngsters, amongst them Bobo and Whitey. They’re roaming the streets, speaking about their love interests or about their goals in life (“We’re the same”, says Bobo, “we have no goals.”). I remember one man being worried about his son. He himself doesn’t have proper education, nor does his son. Everything around them is collapsing, and it’s unlikely that his son will have it any better in future. It might as well get worse. Part of this collapse is also the collapse of the human being. The mother of Wang Zhen is diagnosed with cancer. The mood is sombre, and continuously drops throughout the rest of the film. She’s getting treatment and her hair fall out. She shows this to someone in the streets. Wang Bing keeps recording, offering no comment. We’re left with this tragic image. Remnants ends quietly, and as a complete contrast to Rust. It is quiet, almost peaceful, perhaps dead. The majority of Rainbow Row has been demolished. A few people are still living in the area, amongst rubbles, without water or electricity. “Fuck,” an old man says. “It’s as if everyone has died.”

As was the case in the first part of West of the Tracks, Wang Bing often travels by train in the third chapter of the film, aptly called Rails. Even though he depicts a group of workers again, Rails becomes the tragic ending of what we have seen before. The emphasis is placed on old Lao Du and his son, Du Yang. Lao Du has been working on the railways for over 20 years, but he was never employed. He made a living by selling whatever he could find in the complex. “It’s not easy with children,” he says. His wife left him. One of his sons works in a restaurant. The second son is still living with him. The pressure, the stress, the fear of losing everything is drowning him. One day, Lao Du is arrested, and it is not clear when he would return. At the same time, Du Yang, the son, is informed about the demolition of their place. Alone in the small house, he shows Wang Bing photographs of his family and begins to cry when he sees pictures of his mother.

The director’s focus on Du Yang is poignant. Wang Bing stays with him, recording this microcosmos of the collapse of Tie Xi. When Yang’s father is released, Yang appears to suffer a complete mental collapse in a restaurant where he is eating with his father. He cries, he shouts, he seems to have trouble to coordinate himself, he even hits his father several times. What has happened over the years was too much for him. He could take no more. Du Yang becomes the tragic figure of West of the Tracks, a young man, who inhabits the collapse of everything around him.

West of the Tracks is a long and slow film, but the collapse of Tie Xi Du happened very quickly. In the matter of two years, people lost everything they ever possessed. Without Wang Bing, this part of China’s recent past would not have been written. It would have become part of the several other histories that disappeared into oblivion because it wouldn’t be right to acknowledge failure and exploitation. It just doesn’t fit into this image of a rising, prosperous and successful country. As he would do four years later with Fengming – A Chinese Memoir (2009), Wang Bing uses the camera not only to record history, or rather history-in-the-making, but to write history. West of the Tracks is a cinematic document that, despite its running time, needs to be seen. It is not a beautiful film. You will look for beautiful frames in vain. It’s an ugly film, it is not aesthetically pleasing. But neither is the subject matter. What Wang Bing shows shouldn’t and cannot be made aesthetically pleasing. It’s a simple document that asks to be taken as it is; raw, brutal, ugly.