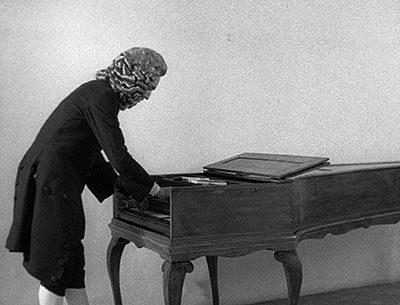 Thanks to a very good and impressive collection of DVDs in my local library/cultural centre, I had the chance to discover the works of Jean-Marie Straub and Danièle Huillet. Finally! They’re often mentioned in the context of Slow Cinema and I have been approached quite a lot about the reason why the filmmaker duo has so far not yet been present in my own work. Truth is that I hadn’t seen their work before. I tried to not focus on almost canonical works in order to see the films I was working on with fresh eyes, not with eyes that have been influenced by the canon and by the writings about it.

I have seen only two of Straub-Huilet’s films so far, and this blog will perhaps be no more than some rambling because these two films posed, to me, one essential question: what is film? I have posed this question before, primarily in the context of static art and the parallels to slow films; those which are highly photographic, those whose directors use static cameras, empty frames, almost no dialogue, little to no movement of the characters. But my argumentation went into a direction different from the one I’m taking right now with Straub and Huilet.

And the reason for this is, essentially, the soundtrack. In my previous arguments about slow films showing similarities to slow art, I put the sound aside and focused entirely on the image. When I saw Straub-Huilet’s Chronique d’Anna Magdalena Bach

(1967) and History Lessons (1972), I questioned that take, albeit not entirely, because my thoughts still hold true to the majority of slow films. They don’t work for the French duo, though, and the sound-image combination is key. In effect, I asked myself (and yes, I experimented with it) whether the image was necessary in those two films. Indeed, a film becomes a film, it is often said, when there are moving images. You can find those in those two films, although the image itself isn’t moving. It’s the characters. When I said that I experimented to find out whether the image was necessary, I mean that I put another window (on my laptop) on top of the video image. I started browsing, not because I was bored but because I wanted to find out what the role and the importance of the image was.

From the minute I started Anna Magdalena Bach I wondered whether I saw a film or whether I listened to an audio book. The film is an extensive repertoire of Bach’s music, if you wish. The first forty minutes are almost nothing more than people playing Bach’s music in long static takes. Here and there we hear the voice over of Anna telling the viewer of the going-ons in the life of the Bachs. The film is radical. It upsets everything we know of film, and it did so even more, I believe, when it was released in 1967. History Lesson is very similar. In effect, the film is almost a monologue, testimony, it’s difficult to say what exactly it is. What is, however, easy to note is that, once more, emphasis is placed on sound, on speech. You can black out the image and you might even get more out of the “film”. What is important in both films is not what is shown, but what is heard. In many slow films, the opposite of what I felt for Straub-Huilet is true. Some films annoy me with their voice overs or dialogues because the images are so pretty, I just want to  sit there and contemplate them like a painting or a photograph.

Straub-Huilet make me want to turn off the image, and listen quietly to what is being said. The image is more of a distraction, and it sure upsets a viewer’s expectation. If you watch these two “films” thinking they would be like any other film with images and sound, you’ll be mistaken, disappointed, and leave the auditorium pretty early. It is the sound only that tells the story. The image comes second, if not third or fourth, and God knows what is in between. It felt like a challenge to sit through those two films, precisely because I took them as films and was surprised that this is not how I perceived them. Yes, they contain moving images, but the image is not important at all. It brings nothing to the film over the course of ninety minutes or so. You could show both with a single screenshot projected against a wall and the sound/dialogue coming through loudspeakers in a gallery. It would have the same, if not a more impressive effect.

So once more on this blog, I just can’t help wondering: what is film? Where does film start, where does it end, and where do other forms of communication take over?

What is Slow Cinema?