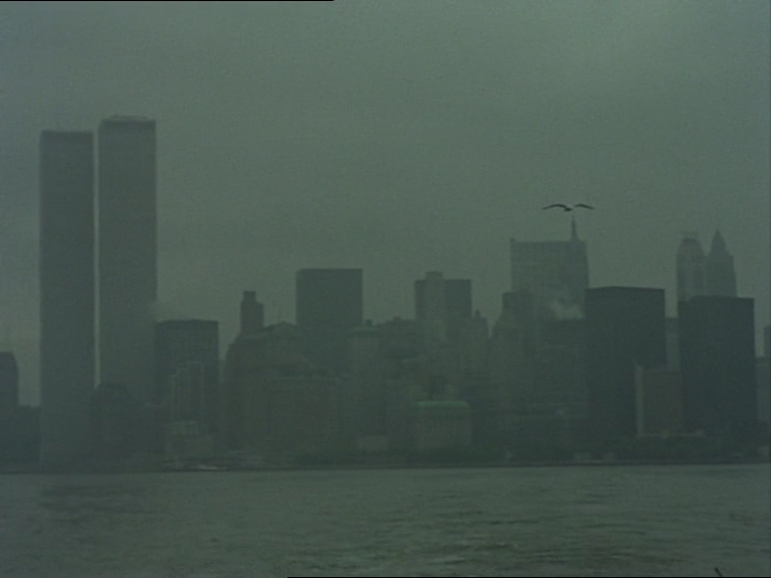 I’m slowly but surely diving more into Chantal Akerman’s filmography. I believe that her work contains a lot that I have been interested in throughout the past years, and it might be worth looking at it in more detail over the coming months and years. News from home

(1975) in that it continues to follow Akerman’s contemplative aesthetics. In some ways, it is a soothing film. The images of New York in the late 1970s are accompanied by a voice over of Akerman herself, reading letters she had received from her mother. The concept is very simple, but effective (affective?).

While we see images, often via a static camera, of cars driving up and down the streets of New York, or people walking the streets, or even people in diners as seen through windows, we hear the written words of Akerman’s mother, always worried, always concerned, always tired. She speaks about her health, needing medication again and again, and the difficulties they have with their shop in Belgium. It appears to be quiet, and Akerman’s mother often evokes that she’s either bored at work because nothing happens, or anxious precisely because of this. It means tighter finances. And yet, she makes a great effort at supporting Chantal in her adventure in becoming a filmmaker in the US. She sends money and clothes, always anxious whether her letters or packages are received.

The voice over is often drowned out by noise in the streets or in the metro. You try to listen, but there is little point. You can catch mere glimpses of what is said, if at all. It is realism that Akerman attempts to pursue here. Cities are noisy, cities are loud, deafening the people who live in it. We become accustomed to it and no longer notice it…until we spend a few hours in the countryside. The approach of letting the spoken word disappear in the noise of city life is very poignant, especially given that the film was made in the late 1970s and it’s so much worse today.

I became very quickly an admirer of Akerman’s shots in the metro stations; beautiful and enigmatic, just like life. What these shots meant to me was much more complex than what the actual images show. These images are images of time, and not just of slowness, but of time the way Chinese, for example, see it. Time not as consisting of only a single pace. Time is complex. Time consists of slowness and speed, of emptiness and fullness, of idling and of doing. At those metro stations people come and go. They wait for the next metro that takes them to another place, that takes them through space. We see them wait, we wait with them, and at some point the metro comes rattling into the station. It’s speed that we perceive. People leave the metro cars, people enter the metro cars. It’s bustling for a few second, and then everything quietens down again. Slowness and speed…the complexity of time portrayed in a single shot.

There is another aspect that I became aware of, and I’m unsure whether this has been written about before. If someone were to ask you what the film was about, what would you respond? We can all describe the film, describe what we see. But what is the film about? Perhaps this isn’t important. At the same time, the indistinct feeling , this not so very clear orientation of where we should go, again speaks for complexity in simplicity.

Did Akerman make a film about New York at the end of the 1970s? One gets a glimpse of life in the city throughout the film’s running time.

Did Akerman make a film about her mother? Maybe. Her written words are the images’ second layer. They give a characterisation of Akerman’s mother, but perhaps also of any mother, worried about a child abroad, in a big city, far away.

Did Akerman make a film about herself? That is possible, too, especially if one considers that she herself is involved (via voice over), reading personal letters she has received and filming the city she now lives in.

Did Akerman make a film about us? Maybe. Everything is possible in this film. Akerman keeps it simple but open. It’s a film that wasn’t finished by herself or the editor. It is finished when it meets its viewer, and when the viewer decides what s/he sees, what s/he wants to read into the images before his/her eyes. Only then News from Home is complete. Only then do we see just how complex simplicity can be.