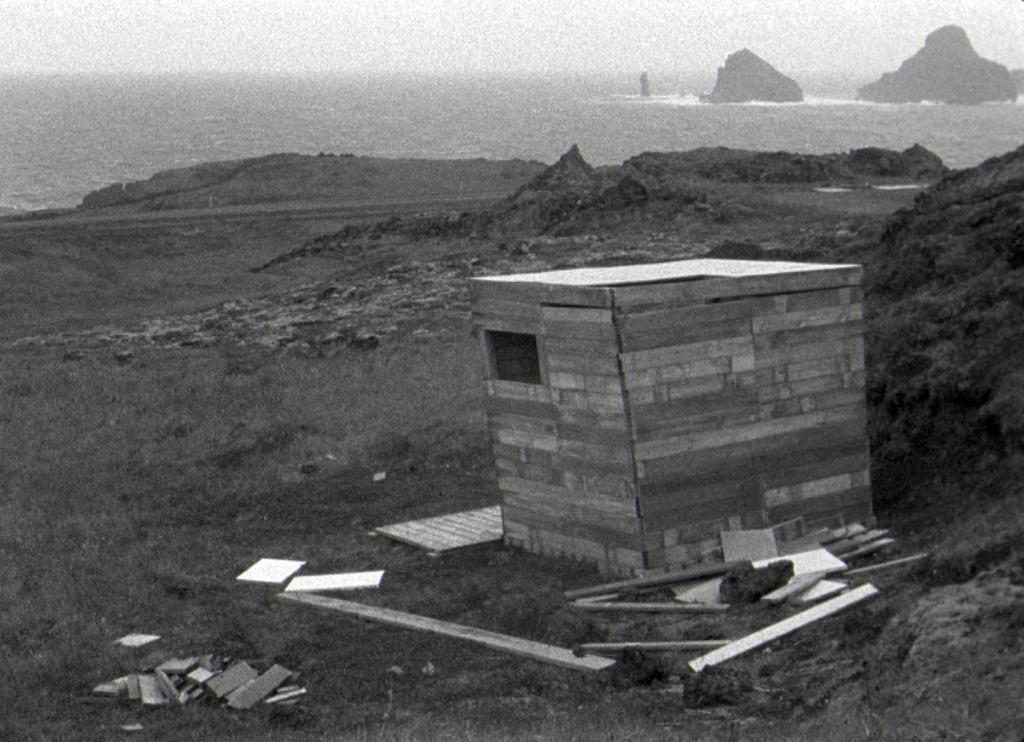 It was in the French national paper Libération that I first came across the work of Annik Leroy. I added a note to myself and thought I really needed to get my hands on her work. Her latest film Tremor – Es ist immer Krieg is my first Leroy film, and I found it magnificent, embalming, haunting. I’m not even sure where to start with this film. It contains so much I’d like to talk about. At the same time, I’d like for the images to linger a bit longer before I try to explain them with words. So we will see where this post will take me and you.

Even though I cannot confirm it for the rest of her filmography as yet, Leroy is known for her meditative films, to which Tremor is not an exception. It starts off with a mind-boggling image that makes one wonder where one is positioned. Where is top, where is bottom? Is the camera tilted, or is it just an illusion? The first image is, I believe a mountain range, perhaps a volcano, but shot with a camera that lays on its side. The sky is to our right and not above us. This disorientation through illusions is one of the main characteristics of Leroy’s film. There are several scenes such as the one I have just described, albeit some of them are much more straight forward.

I love the simplicity of it; a camera on its side, on the ground, recording a lonely tree in a wide field. It’s disorientating, and yet you know what you see. This curious discrepancy keeps one engaged, it keeps one in wonder perhaps, even more so when Leroy turns the camera on its head. We’re on a boat, but the sky is beneath our feet, the water above our head. It’s the opposite of freedom. We have eternity beneath us, but above us…it feels limited somehow. Even though water can have a seemingly endless depth, Leroy’s shot suggests otherwise. It’s more like positioning us like a balloon (as my husband noted) that is stuck at a ceiling, that wants to go further but cannot do so. Leroy keeps us in chains, so to speak, which fits well with the subject of her film.

That said, it’s perhaps not easy to pinpoint a single subject in the film. I believe that Tremor is multilayered, although the focus is history, history of Europe, of art. But it’s also about brutality and violence, about emptiness. Tremor doesn’t contain dialogue, it is a chain of monologues, of book readings in part. Only at the end of the film do we know to whom the voices that accompany us belong.

“We all hate the power we endure. It manipulates us and creates false values.”

“Fascism doesn’t start with the first bombs you drop, or with the terror that one can write about in the papers. Fascism starts with the relationship between people.”

It’s quotes like these that give extraordinary weight to Leroy’s frames, long takes of empty places, ruins, rundown areas.The use of black-and-white and the stillness that prevails in many shots add to the power of the film. Especially the first half of the film is void of people, it feels almost apocalyptic, enhanced by quotes from artists and madmen that makes one think. Tremor is a thinking piece; it is not only a film that forces one to think, it is thinking itself. Yes, there are some films that demand a return to Daniel Frampton’s wonderful book Filmosophy

, and I feel as though Tremor is one of those. I never had the feeling that there was a director, if anything the director might have just been a guidance to the film’s development but the film progressed in a way that was natural to itself. It took the director on a journey, not necessarily the other way around.

Tremor couldn’t be more topical and I think that the film was released just at the right time, the world being in tatters due to inexplicable decisions on the world stage of politics. The sound design of Leroy’s film is somewhat ominous regarding this and the monologues we hear: sirens of ambulances; helicopters above our head but we just cannot see them. Are these warning signs? Warning signs of what is to come? Warning signs of our madness? I should try to see the film a second time in order to be able to grasp the full power of Leroy’s cinematic creation.