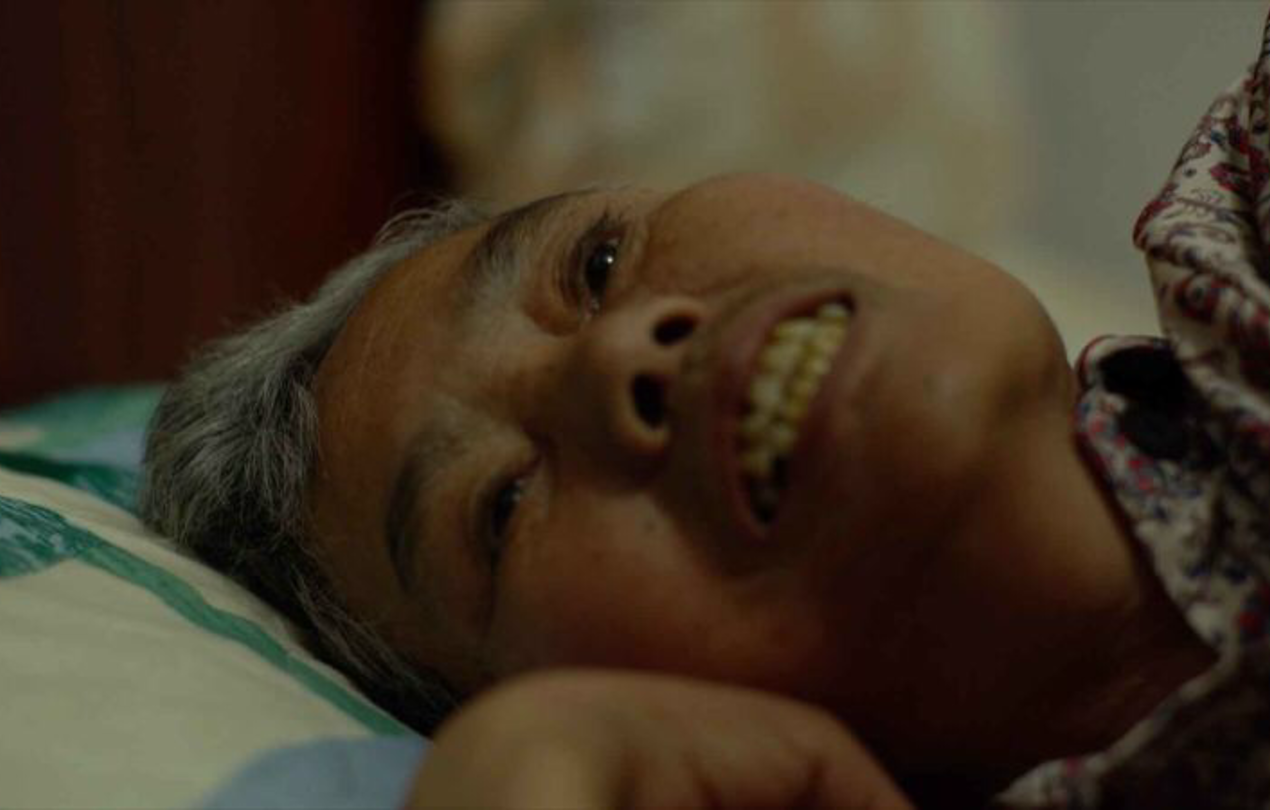 The winner of the Pardo D’oro at this year’s Locarno Film Festival, and a brave decision of the festival jury headed by Olivier Assayas, if you ask me. I’m simply noting a few things, which I started writing while watching the film – I never do this. I never start writing my post while watching a film, but this one triggered some urgent thoughts in my head that needed to be written down immediately.

Wang Bing’s award-winning film Mrs Fang (2017) shows the last ten days in the life of Mrs Fang, who suffers from Alzheimer’s. In less than ninety minutes, the Chinese director, who is usually known for his longer pieces, creates a strong, deep and powerful portrait of the most important part of life next to being born: the process of dying. In careful handheld shots, most of them in medium close-ups or close-ups, Wang Bing pictures Mrs Fang in her bed, hardly moving at times, utterly still at others. In his usual manner, he captures ordinary life because, indeed, life goes ahead for the family member of Mrs Fang. They think of the funeral, they go fishing, they eat. Life and death, often considered as opposites while they are, in fact, part of the larger nature of human existence, are perfectly captured as running in parallel.

I have tried not to read too much about the film, because what can critics say? There is nothing to analyse, nothing to make sense of. Mrs Fang is a film about a woman dying very slowly, portrayed on a big screen. I know that Wang Bing has been both heralded and slammed for bringing death to the screen, for breaking a taboo, the latter being a curious complaint given that the viewer wants his/her film to be always as realistic as can be. It can never be realistic enough, but if a film shows human death not as part of a fictional story, people are offended. The question that one should pose is, what are they really offended by? Is it really Wang Bing’s film? Or is it the idea of them dying themselves at some point, finding those images appalling because they reject the idea of death? Or do they fear that they may end up like Mrs Fang, vegetating in her bed and do they therefore prefer to close their eyes and ignore the possibility?

Wang Bing’s film is more than just about death. What I found curious is the way the family deals with it. It made me wonder about our appreciation of life and of people, of everything around us while we’re still alive. Mrs Fang’s relatives look after her, they notice every change in her breathing, her posture, even a stiffening of a tendon in her neck. They recognise details, details that had no meaning (I would guess) to them while Mrs Fang was still in the full capacity to live her life fully. They surround her, several times, and even though this might look like a curiosity show on screen, I cannot help thinking that Wang Bing is after something else: it’s only death that makes us become aware of what’s around us. The details of a person, the subtle changes in a person’s posture while sitting or lying in front of you – I’m sure you never take note of this. We tend to see the broader picture, which explains why we never actually live in the present. Only in the present would we commit ourselves to look at details, to commit time to noticing.

Photography has long been considered in the context of death; a photograph as the arrest of a certain moment, the arrest of time, a stoppage. It is said that, in some ways, photography always captures death because, once a photograph has been developed, it shows a moment that has been. But only film can capture death. Death is durational; it is a passageway; it is the passing from one state into another; it is movement. A photograph cannot portray this, it can merely show what leads to a person’s death and death itself as a fait accompli. Not, however, death itself. This is something Wang Bing has managed with Mrs Fang, and I salute him for doing so. I’m struggling with seeing my father-in-law dying slowly and have been for a while, and I myself have been wondering whether I should turn this suffering into an artistic project that creates awareness, not only of death but of certain diseases that do not allow for an ethical, graceful death. Can death be ethical in any case?

Wang Bing’s film poses ethical questions. Should he have filmed Mrs Fang in this or that way? Should he have brought it to a festival? Should he have won a prestigious award for it? But how about: why should he not have filmed Mrs Fang? Why should he contribute to the silencing of real death on screen, even though death is, actually, a major part of our lives? There is very little that you can say about the aesthetics about the film. What Mrs Fang does is pose questions. It opens a debate. This film demands more than a “I like it”, or “I dislike it”, because as soon as you start to explain your reasons for your preference, you must start a debate on ethics and death. Wang Bing has created a piece that needs to be engaged with on the level of society. It cannot be described, it cannot be formally analysed; it needs to be discussed. The usual words people use to describe a film – good, bad, amazing, awful – are insufficient, more so than with any other film.

To me personally, Mrs Fang is Wang Bing’s best film. He’s reached the height of his career. The sheer complexity he has shown by this simple portrait of death is overwhelming. Other films of his, such as Tie XI Qu (West of the Tracks)

, are also complex and demand a thorough engagement. But Mrs Fang goes much further. It is not simply a film about death and dying, but about our engagement with it, our willingness to acknowledge what will happen to all of us, about our (non-)acceptance. Mrs Fang goes deep, deeper than any other film I know dealing with the human being, the human as a living creature whose life is finite.