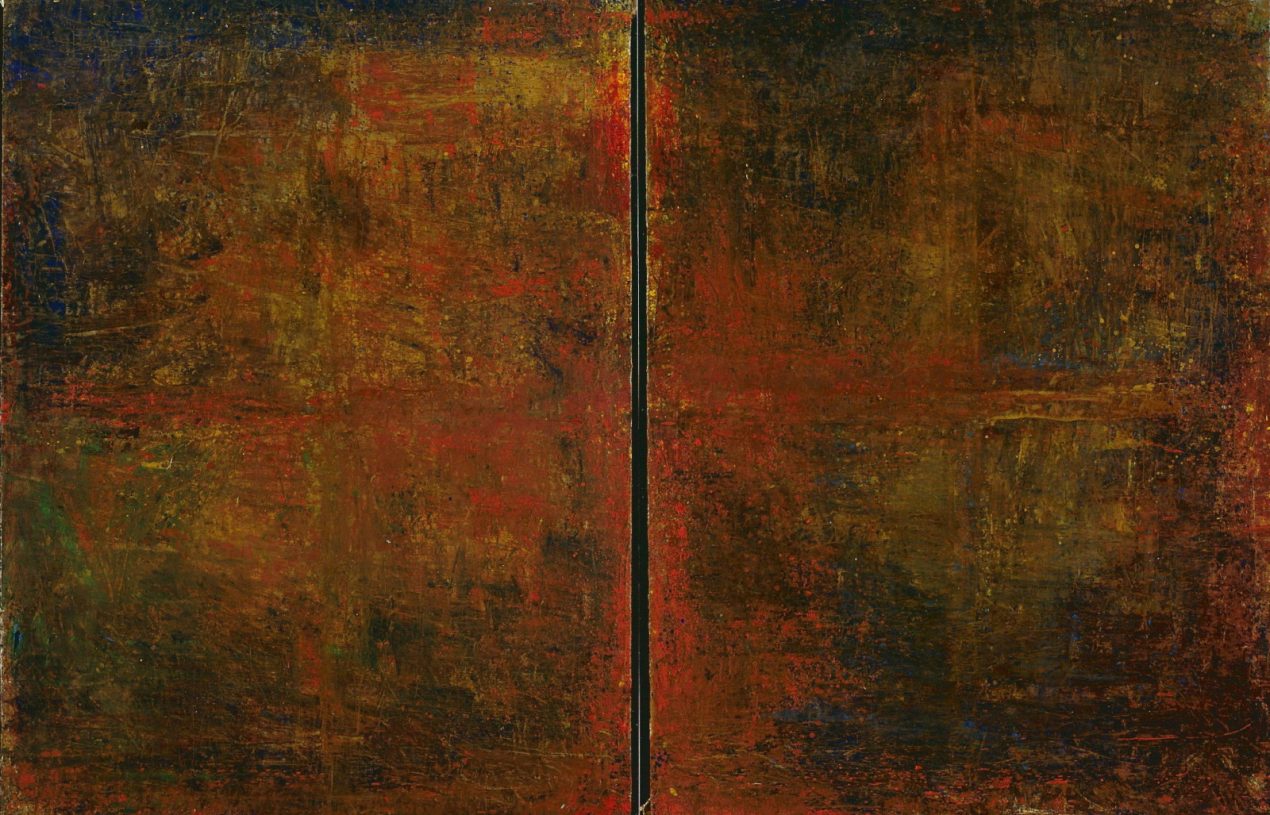 After a rather long break from writing due to health reasons, I’m trying to embark on finally writing something about that book I bought last year, which intrigued me with its title. My avid readers might remember just how keen I am to link painting (or static art in general) to Slow Cinema. Not because I think that they’re the same. They cannot be. They each have their individual characteristics that sets them apart from the other. But there is this use of empty frames, of static frames, of little to no dialogue in slow films that has always reminded me of standing in a gallery in front of a painting, contemplating the scenery I see in my own time.

Like almost all French books I have so far bought for reviewing on this blog, L’art du vide (2017) is the result of a colloqium on the subject which united scholars and artists alike. The book contains chapters on paintings, drawings, even animation films and one chapter that I really enjoyed titled “The dimension of absence in contemporary art”, written by Nadia Barrientos. Some of you might know the works by Jean-Luc Nancy, French philosopher, who also wrote a preface to the book, in which he states that we cannot penetrate emptiness. It is emptiness that penetrates us, pierces through us, and it’s not so much that it leaves emptiness behind. Emptiness means, in fact, fullness. It’s this Chinese adage, which I had read about during my PhD research: emptiness and fullness complement one another. One cannot exist without the other.

This is, as Nancy demonstrates with several examples, clearer in the French language than in English. I was quite baffled when I read that section, and was then glad that I could speak French. Indeed, nothingness in French doesn’t come without fullness. Nancy points out that the French word rien (nothing) comes from Latin res, whose accusative rem became rien in French. In fact, res means thing. It doesn’t mean nothing. It means thing. In French, rien therefore only becomes nothingness if you negate it: “Il n’y a rien à dire” (there is nothing to say). If you don’t negate rien, it remains a positive word.

In his introduction to the book, editor Itzhak Goldberg points out that (as I have previously argued in the context of Slow Cinema) the larger visibility of emptiness as a subject is, as such, not a recent phenomenon. Rather, emptiness has always been there, but external circumstances, such as the increased speed of our lives, make us more aware of the opposite: of slowness, of nothingness, emptiness. It’s like you searching for something to do when you’re bored. Nothingness gives way to fullness, and the other way around. In his online article about emptiness in art, André Rouillé argues – to me quite convincingly – that art has the opportunity to set itself apart from all other mediated images in a world full of images by putting emptiness (or nothingness) at their centre. According to Rouillé, the media are condemned to be fast all the time. It is about grabbing the spectator, about reporting first about an important event. It is, as he says, all about the spectacle, which makes me think of Guy Debord’s Society of the Spectacle and his own comments on it. In any case, Rouillé suggests that art can function as the antidote of this ever-increasing speed, which is being normalised by the (spectacle of the) media.

I think what resonates strongly with Slow Cinema and my work on it, is a quote by Norman McLaren Goldberg uses in order to strengthen his own arguments of emptiness being a central part of art. McLaren famously said that it’s not the image that is important, but what can be found between the images. It’s not so much about showing, but about suggesting, and in order to suggest something on a screen, you have to use nothingness. you have to use the off, something that isn’t there, something that isn’t easy to grasp at first. A great deal of slow film directors use this strategy in order to engage the viewer in their films’ stories. If I speak about the use of absence, as I have called it throughout my work, I inevitably think of Lav Diaz and his magnificent use of the off in order to suggest trauma and create an almost slo-mo progression of narrative. But, Goldberg argues correctly, the use of nothingness (or absence) confronts the viewer with problems. Goldberg does not go into detail here. Yet, I have argued elsewhere that the problem really comes from the fact that the viewer is conditioned. S/he is used to getting everything served on a silver platter, so that s/he can enjoy a film rather than have to work in order to “get it”. This conditioning is also the reason of slow films or “empty” artworks being rejected because they do not conform to what one is used to. In the end, Goldberg argues, this is a very Western attitude: seeing is believing. Something invisible doesn’t count, isn’t worth mentioning.

I could go on about the introduction of the book, which is genuinely interesting and contains a lot of good points. But I would like to draw your attention to one chapter at least, which I found particularly fascinating. I have mentioned on this blog before that slowness/emptiness can be an antidote to anxiety induced by external factors. The hectic 24/7 we-are-always-live news is one example, but by far not the only one. What struck me in L’art du vide was the chapter on the American artist Jacques Brown, who was absolutely afraid of emptiness. He suffered from severe anxiety when he just saw an empty canvas. At one point, he wrote in his personal notes: “I died 36 times in this canvas.” He coudn’t deal with or handle a white page, an empty canvas, anything that was empty. It prevented him from creating something. If it created something, then it was utter fear and debilitating anxiety. So what did Brown do? He used old account books of his wife to draw on. Those pages were not white, not empty. He could draw freely on it without being inhibited by “the fear of emptiness”.

In her superb chapter on the aesthetics of absence in contemporary art, Nadia Barrientos writes that absence forces us to shift our attention to something that had previously escaped us. Absence functions as a reminder of something previously forgotten, and to show us this something in a new light. Absence works like silence, which is often used to enhance what has been or what should be said. I have been fascinated by something I’d perhaps call “temporary art”; a work of art that disappears after a while. In some ways, those are wonderful examples of the interaction between fullness and emptiness, combining both to generate a powerful message. Barrientos mentions 2017 by Thai artist Pratchaya Phinthong, for instance, which is a sort of mural painting written with a special ink that slowly but surely disappears the longer it is exposed to daylight. This is not only about fullness and emptiness. It is, to me, a statement about forgetting, something that happens very slowly, almost invisible until one day a certain memory is gone. As Barrientos correctly points out, Phinthong’s artwork goes against the famous adage “the medium is the message”. Here, it is the process – of change, of forgetting – that is the message, and that stands above all and invites the viewers to reflect upon this.

Nothingness, or emptiness, has, as this book shows, wide-ranging meaning. What stands out in all chapter is the idea that nothing doesn’t mean nothing. On the contrary, nothing always stands for something, and helps highlighting this particular something. The use of emptiness/absence is a way to engage a viewer, to reflect about major themes as large (but important) as humanity. Nothingness can be anxiety-inducing or soothing. It can be the centre of an artwork, or it can be one of many characteristics. Nothingness can be there from the start, or an artwork can disappear in front of a viewer’s eyes. This “nothing” is multi-facetted and more than just “nothing”. I think this is the easiest, and quickest (oh, the irony) way to describe this collection of essays!