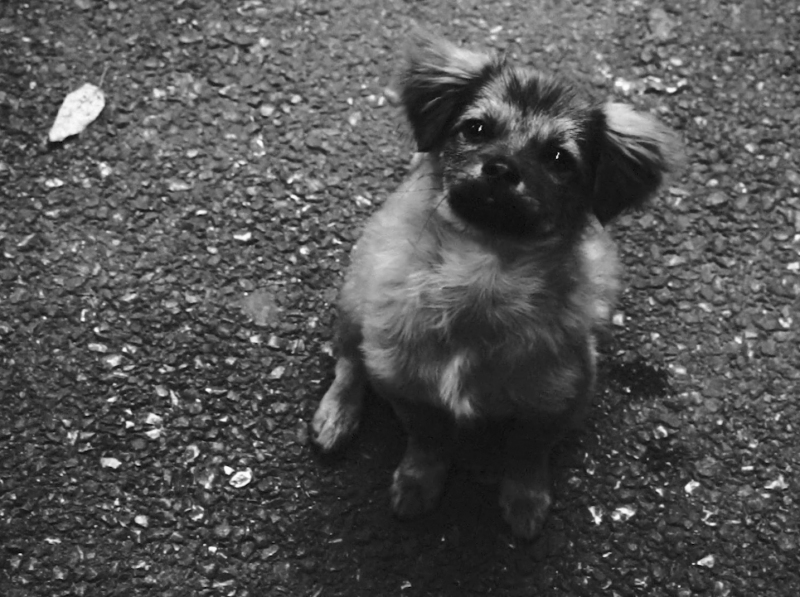 There are films that one struggles to forget. They stay with you either because they are terrible, or simply really good. Others stay with you because they’re affective in their simplicity, and really touch your heart. This fascination with films that don’t let me go has reemerged with Lam Can-zhao’s wonderful The Dog, which proposes multiple layers to the viewer about life and human relationships. It is one of many examples of a striving independent film community in China that creates a high-quality output, often without many people being aware of it because those films are not always easy to get your hands on.

The Dog is set in Guangzhou, China, in early 2014. A mother and her daughter appear to wait for the bus on the roadside. It’s a busy road. Scooters rush by, people walk past. There is a persistently high noise level that fills the director’s long take. The camera is static. Just like the people in front of us, who wait for the bus, the camera doesn’t move. It’s patiently waiting, surrounded by a sea of noise and movement. “Action!” Someone shouts from behind the camera. Is it the director himself? Does it come from a film crew nearby? It upsets the constant stream of movement, of our being invested, hypnotised by the passing scooters. In fact, it is the beginning of the director creating an at times frustrating, yet enjoyable encounter with his film, cleverly yet cruelly cutting at moments you just want to stay with a little longer. His cuts feel brutal at times, like a book which suddenly closes on us, depriving us from further reading.

The cuts become an editorial manifestation of the dog the director follows. A stray dog. He falls out of a basket at the beginning of the film, and then functions as a narrative thread, connecting our characters, people on the margins of society; a woman who is bored to death, living on the roof top with her boyfriend who is never really there; a man whose wife is severely ill and whom he has to take care of; a woman who tries to make a living by running her own snack service. The characters are as varied as can be, yet they share the exclusion from society. They share the invisibility, the fate of being forgotten. They share a life on the margins, in the dark. But they also share the company of a nameless dog.

A dog, who travels from one character to another, because everyone has a heart big enough to pick him up, but no one has the means or the chance to keep him. It is here that the previously mentioned cuts achieve their meaning. The director leads us on. A scene is picking us up. We feel comfortable, expect to stay, but then he brutally cuts and we’re put in front of the door again. Just like the dog. A young woman picks him up. She takes her distance, caresses him with one of her feet, but eventually takes him in. While preparing to give him a wash, her boyfriend arrives. They have sex, which we observe from the dog’s perspective, who sits at the other end of the room. “Take him away. It makes me feel uncomfortable. It’s like there is another eye in the room.” None of her arguments stick. He wants her to get rid of the dog.

This is the beginning of a journey through the margins of Guangzhou. Lam Can-zhao shoots the city in gorgeous black-and-white. Of course, this supports a narrative of people living on the margins, in poverty, away from the buzzing life of the high street. But the director does something else, which I noticed comparatively late. The stark black-and-white is combined with a particularly tight framing. It feels like tunnel vision at times, allowing us a rather boxy view of everything. Trapped where our characters are, confined to their places, both physical (their homes) and metaphorical (in society), without the means to break through the walls that the director so effectively recreates with his aesthetics.

It is an astonishingly claustrophobic world, which Lam Can-zhao’s dog takes us through. Uncomfortable, tight, a dark prison. The camera is often positioned on knee-height. There is no overview. There is no wide angle. There is only a small square, a snippet of a life, which suffocates Lam’s characters. In the last half hour of the film, after a gun shot, the director cuts to a slow-motion of the dog running across what looks like a dump yard. Is what we see a distant memory? Or is what we see happening in the here and now? Lam plays with time and space here, disorienting us by cutting the sound. Sound allows us a temporal and spatial orientation. But Lam remains true to his approach of locking the viewer into a claustrophobic prison s/he cannot escape from.

Only towards the end does the tight grip loosen. Lam shows us an open field from above, the camera pans across house roofs when a Buddhist monk arrives in a village and asks a young boy for meat for the dog. There is warmth to it. The sun shines. It is a scene very different from what we have seen before. It’s as though the film begins to breathe a bit, surfaces from the darkness in order to breathe before it returns into the claustrophobic darkness.

The Dog is a magnificent debut feature that is strong on aesthetics and narrative. It is not always overt in what it wants to say, which makes it a particularly affective film because you need to open up and feel in order to read the film, which deals essentially with the nature of being human, with loving attachment but confining pressure. The dog becomes a vehicle for the exploration of characters who each have their burden to carry. It is a gentle film, full of emotion that bubbles under the surface, tickled by the presence of the dog, but not tickled enough to be released. Perhaps it is for this reason that the film as a whole, and specific scenes in particular, will stay with me because there is something that hasn’t been said, and it’s this that sticks more than anything else.

Slow Cinema at Rotterdam and Glasgow

Leave a Reply to Shane Cancel