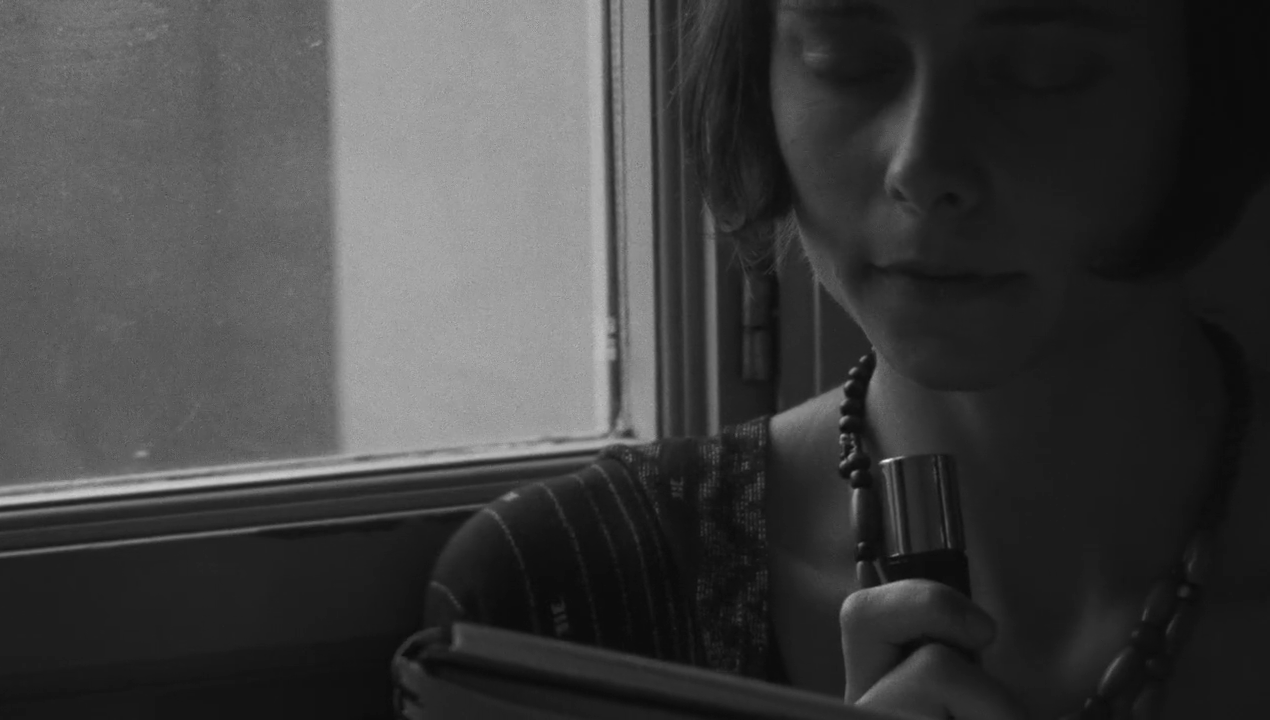 A curious title, a provocative message from director John Mark Ostrowski, whose work I came across for the first time during my work on tao films VoD, where we show his previous film Sixty Spanish Cigarettes. The real film is elsewhere, somewhere else, not here, not now. But where?

A female voice introduces the film. She speaks in broken French, seemingly still learning the language. The voice over, animating the black screen, allows for an almost magical journey. Where will this film go? Speaking in metaphors, the woman uses a poetic language to lure us in. She speaks about love, about the sea, her words inviting us to float with her words, which we use to look for meaning; the meaning of her words, the meaning of the film’s title, the meaning of the woman’s memories.

Music sets in. The black screen gives way to a close-up shot of water. Waves push and pull a large flag, entangling it in a swirl of different currents that make it no more than a toy. It’s defenceless, vulnerable to the surrounding forces. Ostrowski cuts the sound of the water, deafening us, disorienting us, but also guiding us with dramatic, yet minimalist music. A foreshadowing of something elsewhere, something to come, or something that has already been. The flag – an important metaphor in the first part of the film, a symbol of belonging, of identification.

We get to know Sofia, the woman whose voice has led us into the film, and Javier, an elderly man, who suffers from a bad cough, who looks poor, but whose words radiate with power. Javier is a philosopher. He carries around a flag that he found in his grandparents’ house. He assumes that his grandparents attached great meaning to this flag, so he kept it. But “My flag, my own flag, I don’t know what it is,” he says. Instead he tells Sofia that everything is the same everywhere, yet one always makes one’s own out of what one loves. The almost intimate, very open conversations between Sofia and Javier are special. They add a counterpoint to the film’s long takes, bring substance to them. “We all come from the same womb. I don’t consider myself white, or black, or yellow. I consider myself human,” Javier says.

Ostrowski surprises when he introduces a third character, Pablo, Javier’s son. Sofia has a lightness to herself that contradicts the seeming heaviness of Javier. The Fisherman’s Guild, where they stay, makes him heavy, makes him suffer. “I can’t breathe. It’s a struggle.” He’s slowly dying, slowly wasting away. His own place, that where he is from, causes pain. It wants him to leave. There is a palpable gentleness between Sofia and Javier, an intimate relationship based on mutual (non-sexual) love. The role of the human soul plays an important role here. Ostrowski is showing soul mates, two people who speak the same universal language.

After Pablo’s unexplained disappearance, the film takes a more sombre tone. The lightness, the philosophy – everything has lost its meaning. Instead, Ostrowski’s film turns into a haunting ghost that weighs heavy on the two characters. There is an attempt at continuing, but one can feel, as a viewer, that something has changed. The film isn’t the same. It is mourning Pablo. It is mourning Sofia. It is mourning Javier. At one point, there is hope. Sofia notes that Pablo had been seen playing the guitar in the streets. We will never know. What we witness instead is the cut of the gentle ties between Sofia and Javier, a birthday present for the latter, heartfelt, but also a farewell gift that bares too heavy on the man who struggles breathing in this damp surrounding in the Fisherman’s Guild. Metaphorically, literally.

What remains in the end are traces; traces of an incredible lightness, of thought-provoking conversations, of two characters that have shared a bond. What remains are the traces of a film. Elsewhere.