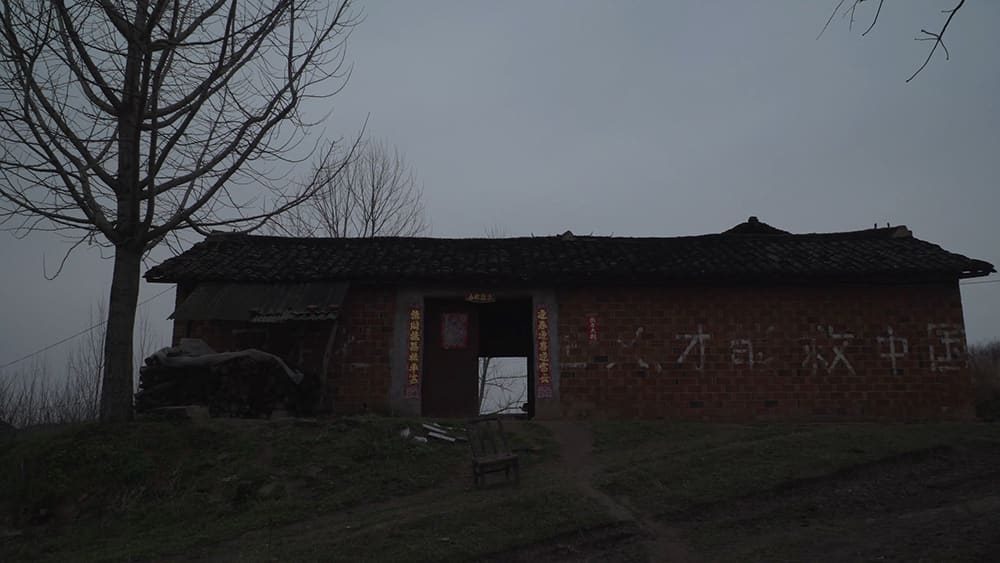 Could it be that China currently has the single most promising output of contemporary Slow Cinema? I could, of course, be wrong. And yet it feels as though there are more and more slow films from China on my radar. Wang Bing is the most known, I would think. His work is important at a time when the CCP rewrites history and silences those who do not fit into the party’s ideology. With an active persecution of minorities going on, moving-image documents by independent filmmakers who film clandestinely have become more important than ever. I want to highlight the work of Xu Xin, too, whose A Yangtze Landscape (2017) shifted the focus away from the grand and incomprehensible, because hyper-quick, development of China from a predominantly rural country to a seemingly prosperous industrial (and capitalist) nation. He focuses instead on those people who have become, from the point-of-view of the Party, unfortunate collateral damage: people who have lost their homes because new construction sites mushroom around the country; people who have been injured in their attempts at saving their property, their life’s worth of work. There is also the work of Shengze Zhu (Another Year), Zhengfan Yang (Distant), Zhao Liang (Behemoth), Bi Gan (Kaili Blues), Zhang Hanyi (Life after Life) and, of course, Liu Jiayin and her Oxhide films.

Adding to this already strong filmography, Zhang Mengqi‘s Self-Portrait: Sphinx at 47km (2017) walks in the steps of those who have walked the slow path before her. Zhang is a dance studies graduate and her self-portrait series began as a dance project. Sphinx at 47km is the second self-portrait film she made and it is a wonderful one at that. The title poses questions, albeit it is pretty simple once one has seen the first few scenes of the film. Zhang films in a village from where the next larger city is 47km away. The city is never shown, Zhang remains in the village and films life, or what remains of it, in rundown houses and void landscapes. I couldn’t help think that the city is one of perpetual movement, of busy streets, of construction sites which promise new and better apartments. I couldn’t help but think that the village Zhang filmed existed in a parallel world, a world that is somewhat at the horizon (47km is, after all, not that much) and yet difficult to reach.

Not so long ago, I read an article in the New York Times about a rural village in Japan where no children have been born for the last eighteen years. The village is slowly dying, like so many others around the country. One woman now knits dolls which replace those people who have left the village. Zhang’s village reminds me a little of this. It is clear that Zhang films a village in the process of disappearing. It feels empty and without a future. There is a soul there, but its light is slowly fading. I remember this one elderly woman who told Zhang that she had never been ill in her entire life. Until one day, she was so ill that she couldn’t move anymore. She almost died of thirst, if it hadn’t been for a neighbour who fetched her some water. There was no running water in the houses, even at the time of filming, in 2017 when hyper-modern cities are constructed around the country. Zhang films a forgotten part, rural villages after all are often the habour of tradition, of a country’s soul. Perhaps it is for this reason that those villages are forgotten: their soul no longer has a place in today’s post-modern strive for an eternal renewal of identities.

There are two children in an empty field. They laugh, they have fun telling one another what they are in their dreams. They are animals, they are cities. Their imagination has no boundaries. It allows them to travel outside the reality of the village. And so does drawing. One child sits in a bare house and draws several pictures. She explains them, she tells stories. There is a story about everything she draws. There are colours in her drawings, which you cannot find in the dark, sombre and drained village she lives in. Self-Portrait speaks of two different worlds. There is the dying world of the adults, grey, without a future and marked by painful losses. Zhang’s images of life in the village are interspersed with fragments of a woman’s monologue about her son, a promising young man, good-hearted and with his head screwed on. When he was cheated on at his work place, he got into trouble with the law and eventually received the death penalty. As absurd as it sounds, this rise and fall of a prodigy son is perhaps a metaphor for the country itself. Of course, this needs to be seen, but I have a feeling that Zhang singles out this story in order to make a point about China itself.

On the other hand, you have the world of children, who dream, who draw, who play. Children who perhaps appear as the future of a dying village, but it is clear that they probably won’t stay there. They will go on a 47km long journey to the city, where there is a chance of employment, of climbing the social ladder, of turning the colourful images from their childhood into reality. They paint a large picture on a red brick wall, a landscape scenery, a scenery unlike the one you find in their surrounding. There are dreams in this village, dreams which can take a child anywhere. This anywhere has long been lost to the adults.

Self-Portrait falls in line with several in-depth explorations of life on the margins of Chinese society. As I wrote at the beginning of this post, there is a strong generation working on painting a picture of inhabitants who have been sidelined by the rapid development of China, a picture of places which have been neglected and therefore fallen into oblivion. This is not only about the people. Looking at the houses, the crumbling buildings, one cannot help but wonder what the village will be like in ten years’ time. Like her fellow filmmakers, Zhang created a document for the future, a document to show what has been. A country in flux with many on the losing end. A strong film by a director, whose work I will definitely follow in future.

More slow films for the world