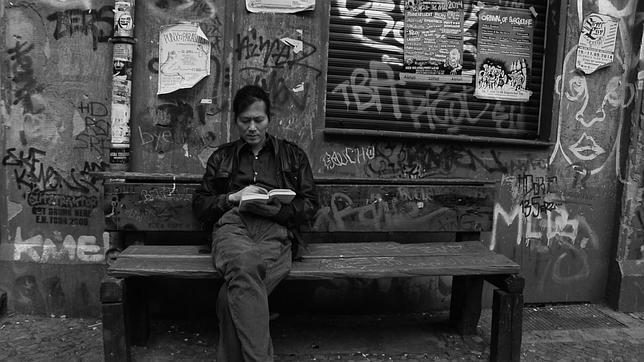 It is rare that I focus on a person on this blog. I tend to focus on films or books, but never on a single director or writer. But this time, I find that it is necessary to discuss a collection of thoughts by South-Korean philosopher Byung-Chul Han because they are so vital for Slow Cinema and what the films represent. Reading his books made me change track regarding the ending of my own book. In many ways, Byung-Chul and I share many ideas, which comforted and encouraged me. At the same time, I now want to make space for his thoughts in my writing.

Byung-Chul Han left South Korea over thirty years ago and is now a professor of philosophy in Berlin. His writing revolves around time and society. The former, in particular, is quite striking and informs the latter. The way we live, the way we work, the way we project ourselves into our future — this is all governed by our concept of time. A concept of time changes our concept of society. I’m always reminded of the example for circular time: farming. It is often used to demonstrate the drastic changes in time and society because it is an easy and clear example. An agricultural society is based on circular time. It is based on seasons, on day and night. It is based on the rain season and the moon. Agricultural societies didn’t need a mechanical clock, which tells the hour. It didn’t change anything about the fact that seasons come and go, and that sowing and harvesting depended on the natural flow of time.

Today, we are far removed from this kind of society. We not only (think we have) mastered nature, but also time. By mastering both, we were capable of greater exploitation of resources, a larger accumulation of wealth, a wider distribution of power. Of course, we must not forget that exploitation and accumulation happens at the expense of a large part of society, a large part of the world even. And at the expense of our planet. It is now well known (although, sadly, not always believed or registered adequately) that our persistent drive for more is also a drive towards the end. Our behaviour has become self-destructive. Byung-Chul Han describes capitalism as a death drive (Todestrieb) and it is difficult to argue with this.

I don’t want to focus so much on Han’s critique of capitalism here, even though it plays a crucial role in his writing. Especially his essay on the Müdigkeitsgesellschaft (Society of Fatigue) is eye-opening and thought-provoking. One aspect of importance is his belief that with the “death of God” (there have been several arguments about this in the past) our life has become radically ephemeral. The concept of God allowed temporal stability. Because of God (we should perhaps say: because of God’s presence), there was an eternal, lasting present.

With the death of God, this structure has collapsed and everything becomes ephemeral. Nothing lasts, and all we have left is the future. The past has been, the present is gone in light speed. We hurry towards the future without being able to grasp it, to hold it and savour it. The future is always two steps ahead, and we’re eternally rootless. What does this rootlessness cause? It causes stress, anxiety, depression. We no longer belong in time, indeed we no longer have time because we can’t hold on to anything.

Let’s take a look at Han’s essay Duft der Zeit (The smell of time). How can time smell? At the same time, can we hear it? Taste it? Time is usually something we don’t associate with our senses. It’s an abstract something, nothing concrete, even though it has a concrete presence in our life. So, what does Han mean when he speaks about the smell of time? Today, we know about ancient “clocks”. We know about the sun dial, we know about the water clock. But ancient China had another clock, which was in use until the end of the 19th century: hsiang yin, an incense clock.

The smell of the incense doesn’t disappear quickly, but it stays in the room. The hsiang yin spatialised time and suggested that time is duration. How different is this from all the other clocks, especially our mechanical clock, which has turned time into such an abstract thing that we can no longer fathom it? Time was space for the Chinese, and considering time as spatial has an effect on how we are. Our identities are inextricably linked to time. The more fleeting time becomes, the more fleeting our identity becomes, too. And this has drastic consequences for our perception of ourselves and the world that surrounds us.

Han speaks of an “atomistic identity”, already much more fragmented than Zygmunt Bauman’s liquid identity. Our identity is no longer rock solid and lasting, but a weak assemblage of multiple elements, each of which is ephemeral. This mix-and-merge identity used to be championed because it liberates us. We could choose from an ever-increasing number of elements to choose our identity from. But truth is that, today, we realise that this freedom has become a burden. The result is nothing but exhaustion, confusion and frustration.

Useful for an understanding of the kind of world we live in today is Han’s distinction between, in German, Erfahrung und Erlebnis. Both mean experience in English, but in German there is a crucial difference between them. Erfahrung needs time. It’s based on duration. Erlebnis is usually short-lived. Han describes the Erlebnis as “zeitarm” or “temporally poor”. I would perhaps describe the Erfahrung as vertical time, something that digs deep and changes something in the individual. Erlebnisse, in the plural, are a succession of events that take place and disappear again. They don’t last, but are instead replaced by new events. I would therefore say that Erlebnis is akin to the horizontal time we imagine nowadays. Yet, there is something else for Han. The world we Iive in today, is a world of (and a time of) information. Information is timeless and “emptied of time”, as Han describes it. To me, the question arises: can we still build up Erfahrung in an age of Information?

Everything is splintered, chaotic and without a real direction.

If you’ve been with me for a while, you may remember that I spoke about the vertical several times. I came across it first in the context of Maya Deren and her experimental films. Buddhism, to which I came via Chinese painting, has a vertical aspect in that a lot of it is focused on experiencing life. And then there is Slow Cinema, which now feels like an antidote to the world Han describes in his books. I should be careful with the word “antidote”, given that I have always argued against Slow Cinema being a movement against something. I have always found the films to be for something, rather than against it.

Slow Cinema is from a world where God still exists, where there are things to hold on to. I’m not so much thinking about the films’ stories. I’m thinking about the time they show. Are slow films the modern version of the Chinese hsiang yin? Do they not spatialise time to make it visible, recognisable again? As opposed to our ephemerality, the films, in their depth, allow us to break out of our tormenting chaos and hold on to something, just once, for a little while. Slow Cinema grounds us, puts our feet back onto the ground to allow us to feel and experience once more, to allow us to become aware of ourselves and of what is happening around us.

At the same time, there is no other form of cinema which so adequately shows what Han describes as a society of fatigue. In a revised edition of his popular book, he even added thoughts on the “burnout society”. The films’ characters have nothing left. They have exhausted their souls, as Han would describe it. A deep exhaustion, which so many of us suffer from, but which we notice too late because we frantically chase fragments of time, of identity, of the future. Slow Cinema is, in a nutshell, the lasting duration, the Erfahrung we have lost, and simultaneously a mirror to show us the exhaustion our fragmented lives have caused. Byung-Chul Han’s essays are immensely important today and I’m looking forward to working more with his thoughts and arguments about time in the future.