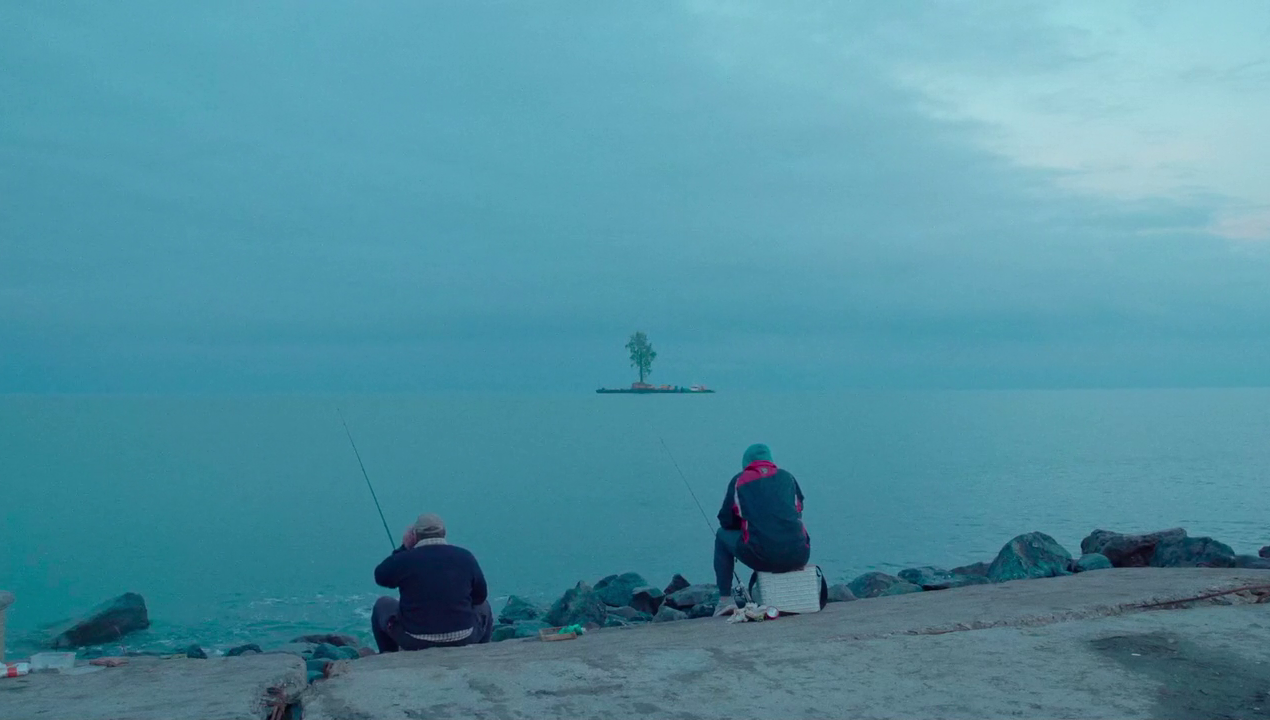 A wide open space. Almost everything is tainted in a dull blue. The sky and the sea are like identical twins that are difficult to tell apart. It’s hazy, perhaps, but certainly humid. Two fishermen sit along the coast with their fishing poles standing ready for a catch. In the far background, something that looks like a tree. It could be an island, uninhabited, with a single tree to its name.

It could be an island, if it wasn’t for the fact that the island was moving. In fact, there, at the horizon, is a large ship that carries a tree to an unknown destination. Where it comes from, where it is headed — Salomé Jashi’s sequence of images does not yet give an answer. But she doesn’t hold back long.

Taming the Garden is a film about a man, a powerful man, who remains absent from the film. He is, in some ways, the protagonist of Jashi’s striking documentary. The former prime minister of Georgia has developed a rather strange hobby: collecting trees, moving trees. Buying trees from people to have them shipped to his own private garden. His paradise, one could perhaps say. He creates a forest all by himself with an ensemble of trees chosen not because they would be able to survive in that particular part of the country, in that particular soil, or with those particular trees surrounding them. No, the former prime minister gets out of his car when he sees a tree that he likes. He walks around it, silently, keeping his eyes fixed on the tree that caught his attention. Then he leaves, almost as silently as he came.

This seems to be standard procedure, as we can gather from people who dealt with him.

But let us return to the beginning again. Let us return to this tree on a ship, over there at the horizon, that was taken from its land, from its soil where it had its roots. I often had to think of something we say in German (perhaps there is something similar in other languages): old people are like trees, one cannot (and should not) move them away from their roots. They will wither and die. This is the reason we didn’t force my grandpa to move to our town after the death of my grandma. We would have loved to have him around, but we knew that he was deeply rooted in the city he had lived in for well over 50 years.

Salomé Jashi’s documentary shows to which length the former prime minister is willing to go to create his own, let’s say, mega garden. There is truth to the saying I just mentioned, so workers and machinery are hired to take the tree with all its roots. Giant holes are being dug, leaving a dead, empty spot where life used to be. These holes are often found right next to houses that already fall apart, houses in the middle of nowhere, where people struggle to make ends meet.

This is how much the former prime minister is willing to offer for a tree; an immense sum in a country where the average household income stands at just over $400 a month.

And all of a sudden, natural ressources, such as trees, are given a price tag and are being purchased for someone’s (crazy) hobby. Many of Jashi’s superb shots reminded me of Nikolaus Geyrhalter’s Earth (2019), in which we see workers ‘moving mountains’. One could almost merge the two films; the wounds we inflict on the planet would become even more visible, even more absurd.

”I still don’t know why he’s doing this.”
“Suddenly you get money for a tree. That’s cool.”
“And when he has all the trees?”
“He’ll go after the birds.”

Two men wonder about this strange endeavour. They’re torn between it’s being a blessing and a curse. In another house, a man expresses his gratitude towards the former prime minister. In exchange for the trees, the village gets a ‘quality road’. People who cannot appreciate this are ungrateful and ignorant.

Who gives a fuck about trees?

Yes, who does, actually?

Jashi moves from house to house, and she also films entire villages coming together to witness the slow and long departure of a tree that had graced the village for generations. It’s the elderly who care, it is the elderly who have memories attached to trees under which they rested in the summer, under which they sought refuge in the rain, under which they might even have kissed for the first time. A tree has its roots in the ground, but extends them to the people who live with it. Memories are roots. With the (tree) roots gone, memory will fade. Soon, no one will remember the magnificent chestnut tree that was the centre of the village. Soon, everything will be lifeless. No trees, no birds, no oxygen.

He knows that it won’t survive there. He took it deliberately. It used to be magnificent.

Jashi’s Taming the Garden is a film about a senseless project. It is a film which makes you shift between an admiration of beautiful cinematography and a complete disbelief when seeing those same images. It could be a fiction film. It could be a story written by a desperate director. But the real power of this documentary lays in the fact that it is a documentary. It is real, it is a true story. When did reality become this absurd?