The contemporary hype around slowness in all its forms has filled shelves in bookstores for several years now. Most of these books are a kind of self-help strategy for stressed-out people, who wish to slow down their lives. I tend to flick through them only to return them to the shelf again. I don’t really believe in these books, because I think that a book alone cannot slow down your life. The only slow books I have read where written by the wonderful Carl Honoré, whose books are superb and not self-help manuals as such. On the contrary, they make you smile.

With recent (academic) books on Slow Movies and monologues on specific filmmakers, such as Béla Tarr, I thought Lutz Koepnick’s endeavour to write a book on slowness in contemporary art was daring. If you remember, I had a rather unpleasant experience with Ira Jaffe’s book, so I hoped that someone would finally do some valuable and serious work on slowness. For some reason it feels as if everyone wants and does write on slowness (in whatever field) without really bringing something new to the debate. Writing on slowness runs in circles, which is not helpful to its reputation as being ‘boring’.

Koepnick’s book is the refreshing work that the field needed. It’s a pleasure to read and this is mainly the case because it is unique in its approach. Current literature considers slowness isolated from speed. While writers all agree that slowness stands in opposition to speed, it is almost impossible to find a piece of work that argues along the line of slowness being a part of speed. Without speed there wouldn’t be slowness and vice versa. It feels as though Koepnick has put this at the heart of his work, and it is this that makes reading On Slowness so very refreshing.

Think of Futurism, for instance. Futurism was perhaps the beginning of our contemporary obsession with speed. Now we have Slow Art, Slow Cinema, Slow Education. Futurism introduced the complete opposite of everything. Futurist thinkers loved speed. It was an exciting thing to experience. This is how the story goes anyway. What I found remarkable, and this stands at the beginning of Koepnick’s book, is that the author approached Futurism from a slow angle, seeking instances of slowness in an age of high speed. Paul Klee’s Angelus Novus found its way into the book, the angel with the open wings standing amidst a speedy flow of progress and history. The angel is not slow, but the angel stands for stillness. In fact, throughout the book, Koepnick does not so much argue for the use of the word slow. More important to him is the fact that ‘slowness’ opens a complex relation of opposing temporalities, the result of which we can find in the artworks he focuses on in his book.

The idea is to see ‘slowness’ in speed. As already pointed out, we tend to forget that these aren’t entirely separate from each other. An example for this is Koepnick’s in-depth study of open shutter photography, which I personally found the best chapter of the entire book. In open photography, both speed and slowness come together. Koepnick approaches this form of photography from the angle of slowness. He refers to the work of Michael Weseley, for instance, who is known for his spooky photographs of train stations. Say, there is a train from Cologne to Berlin. He would set up the camera on the platform at Cologne train station and open the shutter when the train leaves. He would only close the shutter when the train had arrived in Berlin. The result is spooky, but stunning. Another example is the work of Japanese artist Hiroshi Sugimoto. His photographs of cinema auditoriums are the result of a very similar approach. He opened the shutter when a film started to play on the screen, then closed the shutter at the end of the film. 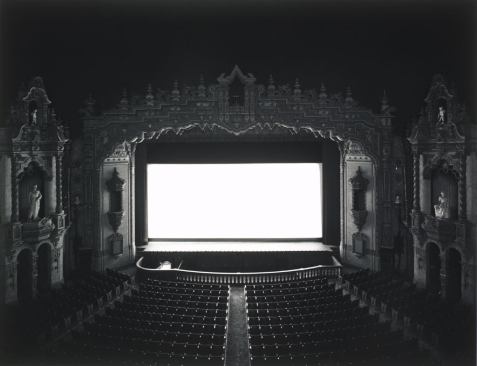 Photography is known for its instantaneous nature. Then there is time-lapse photography, which brings home the idea of photography as being a ‘fast’ form of art. Where do we position open shutter photography? When I read through Koepnick’s arguments I was amazed by this. It made perfect sense to see this as slow photography. But then, is it really? You still capture speed, you capture movement over a long period of time, so in some ways Weseley and Sugimoto use slowness/time to capture speed/movement. Thus, Koepnick’s suggestion that different temporalities are connected in slow works becomes most explicit and obvious in his chapter on photography. He does not go into detail about the actual speed that is captured on the ‘slow’ photographs. Yet as a reader, you can go through the process in your head and you can see that open shutter photography, while being slow at first sight, is actually just one form of time. It is a complex construct of different temporalities. Using one word – slow or fast, regardless – is not entirely correct.

In another stunning analysis Koepnick combines speed with slowness. Tom Tykwer is known for his fast films, especially Run Lola Run (1998). How would you describe the film? I would describe it as a ‘film on speed’, in many ways. And yet, Koepnick makes it his task to see the corresponding slowness in the film, analysing the slow-motion scenes as well as the fact that Tykwer’s characters never have the latest technologies, which we would now regard as contributing to today’s speed. It is those small things that I never thought of. For me the film is fast and a perfect illustration (as far back as 1998) of the growing speed in and of society. But this isn’t what it is exclusively.

Koepnick sees the unseen/invisible in his book. He shows that there is no such thing as ‘just slow’. Slowness is rather one form of temporality which contributes to the complex, multiple layers of time we are confronted with every day. The funny thing is, I have argued a similar thing in my thesis in regards to Lav Diaz’s concentrationary universe, in which he shifts freely between ‘slowness’ and brief interludes of shocks that seem to speed up time. So we’re both on the same page. It’s just not as clear in my words as yet.

Not all chapters have the same quality, but Koepnick’s book is a real must-read if you want to learn more about slowness in contemporary art, or about temporality in art in general. It is an insightful study of how time is dealt with in several art forms – photography, cinema, video – so there’s something for everyone.