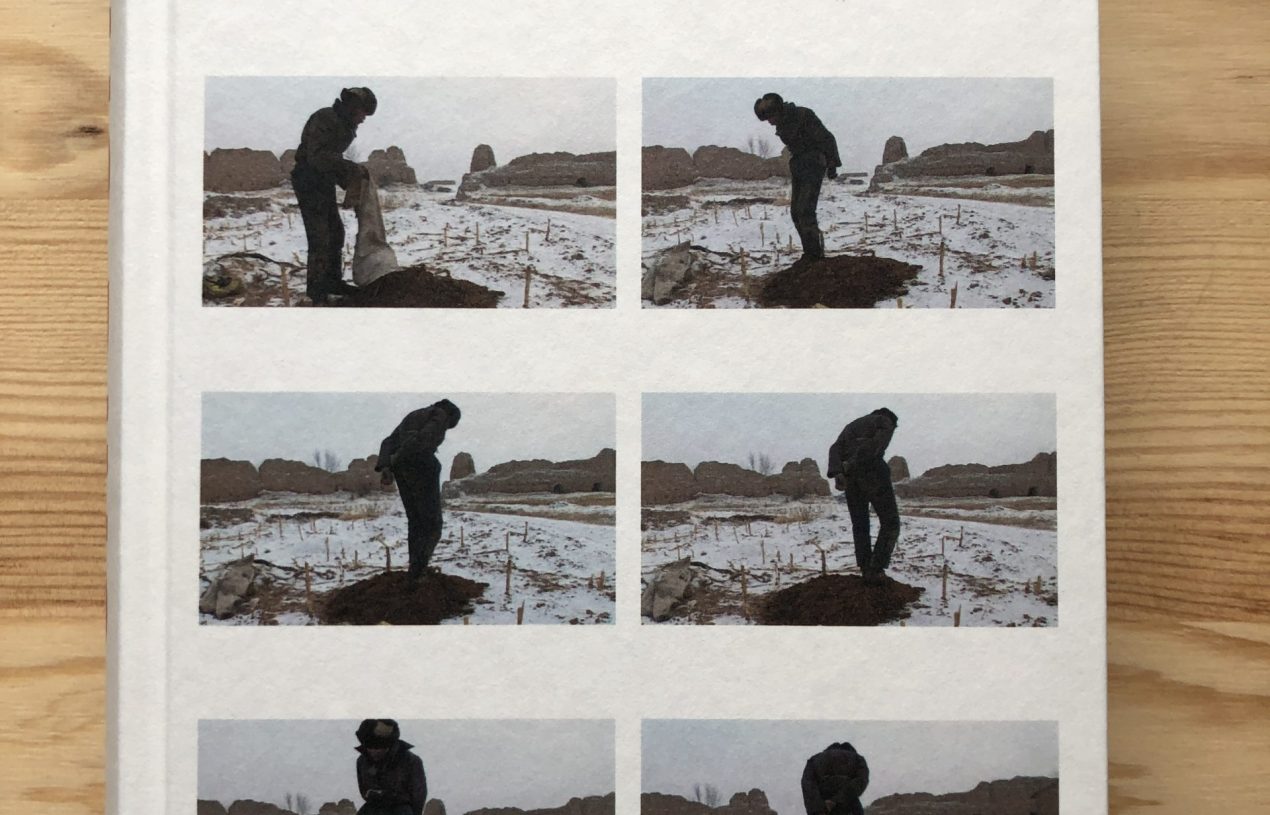 I wished it was me who had the idea for this brilliant title. Sadly, I only managed to use “the camera as eye” at some point during my writing on Wang Bing, which I found quite nice at the time, but it doesn’t reach “the walking eye”, l’oeil qui marche.

What is this about?

A book. A beautiful book, indeed a book, which gave me a lot of food for thought, not through its brief texts about the Chinese director. It had a lot to do with the design of the book. When I began writing about Slow Cinema, I often highlighted the photographic nature of the film frames. Some films – I could mention Red Moon Tide by Loïs Patino (2019), for instance, or any Béla Tarr film – are particularly photographic. In simple terms, I mean by this that when I watched the films, my brain made a brief “click” whenever it found something aesthetically pleasing, and then it put it into a frame on an imaginary wall. To me, Slow Cinema couldn’t be separated from photography.

In 2018, when I was really ill and struggling, I imagined a new project I could work on to keep me going. Alas, nothing came of it (not yet!), which, given the current situation in the world, isn’t a bad thing at all. The project would have included a Slow Film Café, a mix of café and gallery. The walls would have presented “photographic frames” from certain slow films, while slow shorts would have run in a separate corner of the café throughout the day, in a loop. As someone who loves photography, this would have been a project to combine my two passions. Would have…

I was reminded of all of this when I picked up a new French-language book on Wang Bing, published by Le Bal and delpire & co earlier this year. Wang Bing – L’Oeil Qui Marche was published as part of an exhibition of the director’s work, which carried the same name. In the bookshop, I had no chance of looking into the book before I purchased it, so I had no idea what would await me once I would have a chance to flick through the 800 or so pages. The book weighs a ton, and, in some ways, carrying it home felt like literally carrying the weight we can feel in Wang Bing’s films, which always focus on those at the losing end of China’s boom, on those who are at the periphery of a society that drives for absolute homogenisation, on those who are forced to leave everything they ever built, achieved, worked on, to make way for grand projects of state importance. It is impossible not to see, not to feel, the pain in films, such as Ta’ang, Bitter Money, and ’Til madness do us part.

This heavy-weight of a book does justice to Wang Bing’s work. But, as I wrote in my own book, words don’t always suffice. Neither for the films of Wang Bing, nor for most other slow films (albeit I’m trying on this blog). In those films, pictures say more than a thousand words. Essential, too, is the duration of the films, which adds depth to the images and invites the viewer to feel them.

The collection, helmed by Diane Dufour, Dominique Païni and Roger Willems, is the first which gave me a real sense of Wang Bing’s films. Truth be told, all French-language work on Wang Bing has so far been great, inspiring, eye-opening, and refreshing, compared to English-language articles. I should perhaps point out that Wang Bing is heavily supported here in France, is represented by the Galerie Chantal Crousel, and shares his time between China and France. It is, therefore, not a surprise that quite a substantial corpus of literature begins to emerge in the country. L’oeil qui marche is standing out because it is more a photo album than anything else.

The book was a revelation for me. Here I was, with numerous film stills collected in a book. I sat on a park bench in the sun and flicked through the book. Slowly, of course. And I noticed that I was right all the time (no arrogance here!): slow films have indeed something photographic and, even though their duration is crucial to the experience, as is the movement (in some films, at least), what matters most are the images, the framing, the story behind the film, the people they show. In movement or stasis, what’s important is the “documentation” of a certain reality, which we, as viewers, are not necessarily aware of, or don’t want to be aware of.

Wang Bing’s films are, at times, very long. His last film, Dead Souls (2018) had a running-time of eight hours. West of the Tracks (2001) clocks in at just over nine hours, whereas Crude Oil (2008) demands fourteen hours of your time. It isn’t far-fetched to call the director’s films “événements”, events, as the authors of the book suggest. There is something about his films that go beyond film viewing and the experience of it. Wang Bing’s oeuvre adhere to an “ethics of patience, focus and persistence” (Diane Dufour, p.6). For Dominique Païni, the director is a geographer and an anthropologist (p.8), who shows the diversity of his country. Païni also points to the nature of the films, which are not closed stories, but rather “extracts” of life trajectories that had already existed before the arrival of the director at the place of filming, and which will continue once he leaves (p.10).

L’oeil qui marche puts visuals centre-stage, and this is, to me, the only way you can tackle a filmography like Wang Bing’s. Overall, there are only ten brief texts on the director and his films. They’re neither analytical nor do they try to explain things. Far from it. They invite personal responses. There is also an interview with Wang Bing, which unfortunately reads like a standard interview, which doesn’t reveal anything new to those who are very familiar with the director’s films. At the same time, it is a good interview for people who are just starting to discover Wang Bing.

I believe that it is the large number of film stills that matter most. As someone who knows most of Wang Bing’s films (I think?), flicking through this book felt like entering another dimension of the director’s work. It allowed me to really stop and look at what is in front of me. Even though Wang Bing’s films are slow and long, they still prevent an actual contemplation of the images. The director’s moving camera, mostly handheld, defies contemplation. L’oeil qui marche offers precisely this. It arrests the images for us to contemplate, to return to, to look at in more detail. It allows us to take our time, and, with that, adds another dimension of slowness and duration to Wang Bing’s work and our experience of it.

From time to time, the stills are accompanied by monologue/dialogue snippets. They add to the idea of re-experiencing films, of letting them re-emerge. L’oeil qui marche shows me that we need more of this kind of book on Slow Cinema (maybe I should embark on this?) because the moving experience (moving in many ways) is as important as the contemplation of still frames. They’re complementary experiences. Each adds to the experience of the other. It’s certainly something to think through further in the future. For now, I’m genuinely pleased to see such a wonderful book arrive in French bookshops.