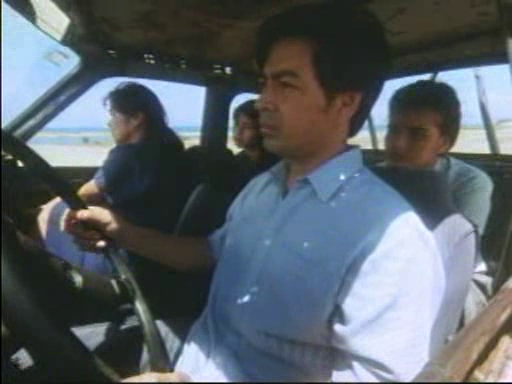 Before some of you mention it, Naked Under The Moon (1999) is not a classical Lav Diaz slow film and it appears strange to add a review to this site, even though the film doesn’t correspond to my take of Slow Cinema. But I find the film decisive in Diaz’s development towards the filmmaker we know today and needs to be mentioned if Diaz’s approach to filmmaking is discussed.

Naked Under The Moon is a studio production and a commercial work of Diaz. Well, in effect, it has been turned into a commercial work. If you strip the film down to the narrative and to some aesthetics, Diaz’s vision of what cinema should be is slowly coming through. This becomes more obvious in his five-hour film Batang West Side (2001) which was his first proper arthouse film. Naked is a kind of prelude to this. The film starts with several long-takes with nothing much happening. There is no dialogue. We only see landscapes or the protagonists voyaging in a car. It’s interesting that even though the film is in colour and even though we actually see a car, which Diaz did not use in his later long arthouse films for his characters – which slows down the temporal perception of progression – it still feels like a beginning of a Lav Diaz film. When I saw those first scenes it also made perfect sense to me why the studio was keen on inserting a few sex scenes to make the film more interesting for the viewer. They must have thought that those long-takes of people sitting in a car would have surely bored the audience (and they wouldn’t have been able to make profit with the film).

Naked is important in Diaz’s filmmaking career because it was a way of figuring out what films should look like, what stories they should tell. The film already shows the dark underbelly of society, though not to the same extent he would depict it in his later films. Rape features prominently (something he would pick up and develop more in Florentina Hubaldo, CTE),  though I wasn’t quite sure how to position it. It didn’t feel like an overt critique, which, I believe, is the case in Florentina. Rather, it shows the pervasiveness. It shows rape as a normality. In one scene, Lerma, a young woman who sleepwalks and was raped at the age of 9, tells her boyfriend, Ador, that this was still bothering her, in particular because she doesn’t know who the perpetrator was. All Ador says (though he says this in a nice, soft and supportive tone) is that she should let it go, she should forget about it, all the while making sexual advances to her. It seems as though this was the fate of women, and nothing could be done.

In general, sex has never featured that prominently in Diaz’s later films, and as I said earlier, those scenes were added to increase the appeal of the film. Indeed, there are plenty scenes of kinky Hollywood sex with standard male-female roles. The sex in itself isn’t a problem, as I would learn when I watched Diaz’s later films. He does include sex scenes, but few and more realistic. It reminds me of that really uncomfortable scene in Melancholia, or the long shot of Hamin and Catalina having sex in Encantos. These films were notably banned for nudity. So, kinky sex is fine, but realistic sex must stay in the bedroom.

It was said of Béla Tarr that his filmmaking became more and more austere, starting from his social realist films to his last and ultimate film The Turin Horse (2011). This is true of Diaz as well if you look at Naked and then follow his (narrative) work up to From What Is Before (2014). Diaz has stripped his films of everything “unnecessary” (for his means): colour, music, close-ups, a fully finished script before the start of his shoot, even a whole lot of crew. The credits for Naked at the beginning of the film are almost endless compared to his later arthouse films. It’s by all means a studio production with a lot of people involved, and they all have their own view of how the film should be.

Diaz has certainly started his fascination with standard characters which he would use time and again in later films. He said at last year’s Locarno Film Festival that those were metaphors for the country, so it is of little surprise that they recur. The raped, at times mad, woman; the deaf mute; the priest. If you know Diaz’s now famous films, you can trace back those multi-layered characters to the very beginning of his filmmaking. He stuck with it, but elaborated on them. This is something Diaz added, in contrast to stripping his films of colour, music etc He added time. He added depth. He added psychology. A film like Naked would be unthinkable in two hours nowadays. Diaz would spend a lot of time on investigating why the situation of the characters, their background, their suffering – there’s plenty suffering in Naked, but sadly it’s cut short so that we see the end result of this suffering almost immediately after suffering has started.

Nevertheless, Naked Under The Moon is a fascinating piece. It is not as underwhelming as I thought it would be. On the contrary. But if those kinky sex scenes had been replaced with more character time to explore their psychology, it would have been a better film. The strong filmmaker Lav Diaz is in there, and you can feel that he wants to get out of the (studio) box. Given his powerful, long films he has ended up making, films like Naked were absolutely necessary for him as a filmmaker. Without those, I don’t think Diaz would be the same director he is today.