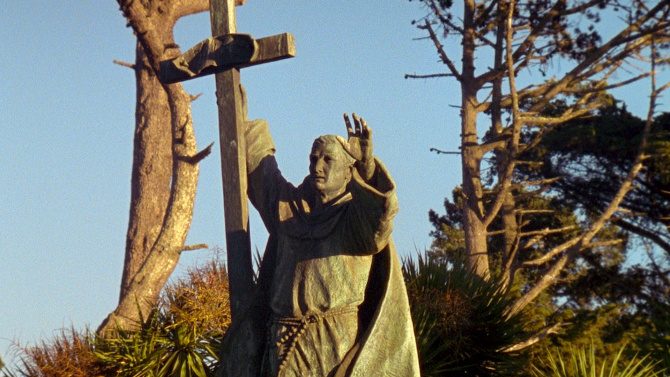 How I had missed this fight inside my head of what is slow and what isn’t. Jenni Olson’s deeply personal, moving and engaging film The Royal Road (2014) started those evil voices in my head again. I think I’ve been saying for a few years now that Slow Cinema is not a fixed but rather a fluid category of films. And yet, I start to find myself figuring out what I consider Slow Cinema and slow film. The former to me is most definitely narrative, while the latter can be anything but is mostly experimental. It doesn’t necessarily need a narrative. This is as vague as I can describe the voices in my head. I thought I would get away with this “definition” but Jenni Olson did a good job in questioning even this attempt of where to position certain films. Is The Royal Road Slow Cinema or a slow film? Is it both (gosh this becomes complicated now)? I don’t want to make a case for either, though. It’s a great thing when I come across films that make me rethink my own writing. In the end, this is what it’s all about and I do not want to be definite on anything. There are millions of films out there. Any fixed definition would fall apart sooner or later.

Slow Cinema or slow film, Olson’s The Royal Road is something entirely new for me. It goes very much into the direction of James Benning, whose films – shame on me – I still haven’t had time to see. Her film consists of several static shots with at times only little movement in the frame. This does sound like the now famous Slow Cinema, and yet it isn’t. The shots in themselves are of several different locations throughout America along The Royal Road. There are no protagonists as such in the frames. The visual protagonist is this famous road of which we learn quite a bit through Olson’s personal interest in history. She takes us on a journey through history, which I, personally, found fascinating. Not only because it was history I didn’t know about, and I reckon most Americans don’t know about either. Even the Royal Road is now broken up into several different highways and city streets. I guess so is the knowledge of the road’s history.

What makes Olson’s journey along this road really fascinating is her combination of historical blurb with the most personal details of her journey to her loved one – along this very road. It is a journey which expands by the minute. It is also a journey which becomes more personal by the minute. The Royal Road‘s auditory protagonist, to me, is herself and her wife, whose first encounters she describes in a sort of dreamy, blissful tone. It sort of reminded me on my own very long, eight hour train journey across an entire country to see my partner. All those anticipations, those expectations, and anxieties – they’re all there in Olson’s film.

Returning more to the visuals, the long shots Olson uses reminded me of a photo album. A sort of photo album that is passed along generations. It doesn’t contain the most beautiful shots but they tell a story and this story comes through the voiceover. It is like sitting down with Olson who shows you one photo after another and who talks a bit about the history or the context of what we see. Or, perhaps, even of what we don’t see. This form of story-telling made me feel part of the film, made me feel part of the journey. It all fits in with the very personal tone of Olson’s film.

I felt immensely privileged having seen the film. I felt privileged to go on a journey with Olson to see her partner. The theme of LGBT is not as overt in slow films as it is perhaps in others (maybe I speak rubbish here but my excuse is that I’m not at all familiar with this field). You do have Tsai Ming-liang’s films, of course, and The Royal Road could not be more different from Tsai’s films. Olson does not create a secretive, fictional narrative about her love to Julie Dorf, her wife. On the contrary, she puts it straight out there which makes me film even more personal. It’s a fascinating piece and I would like to see more of Olson’s work in future. I love her interest and fascination with history, and her style – this slow, meditative photo album style – is intriguing and gives me something new to think about in future for whatever entails Slow Cinema. Or slow film. Or whatever you may call it.