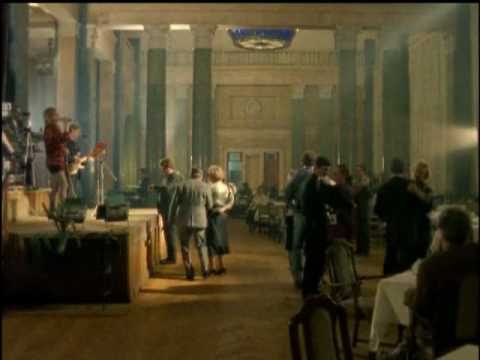 Chantal Akerman’s D’est is a great example of Slow Cinema, and for those who do not feel prepared to start with eight hours Lav Diaz, then this may be a film for you. The film is engrossing, but minimalist. It is slow, yet full of movement. It is, in some ways, a contradictory piece, as you can imagine. This is precisely what made me think of Béla Tarr when I watched it, but more of that in a little while.

D’est is set somewhere in the former Eastern bloc. Unless you read about the film, you cannot determine where exactly the film is set. At the beginning, I felt transported to my childhood. Born in 1988 in the former GDR, then growing up in the east of the unified Germanys, I can say that the initial images of Akerman’s film represent my memories of how people and towns looked like when I was little. I went to school in 1994 and even then things still looked like they used to under Soviet occupation. It took quite a while before life gradually changed. Akerman’s film is universal for a lot of people in that respect. It is not important where exactly the film is set. The political context is much more interesting and perhaps triggers memories in some viewers, just as it did with me.

Akerman’s observation of people in the Eastern bloc is often considered as one of her documentaries. I wonder whether this is correct. What are documentaries? What are their aims and how are these aims approached? D’Est perhaps contains elements of this, but I would much rather describe the film as pure observation. Documentaries often come with the aim of teaching attached to it. But is this really the case with Akerman’s film? Does she really want to teach, or does she merely want to observe, to record, to leave it up to the viewer what s/he makes out of it?

I would even go as far as describing it a poetic observational film instead of merely “documentary”. The term doesn’t convey what Akerman is doing and how she is doing it. The poetics, for me, come from her slow, long and moving takes. They are like part of a symphony and reminded me of Béla Tarr’s films, of almost all of them. Most strongly, though, Tarr’s Prologue (2004) comes to mind and I still wonder whether Tarr rendered hommage to Akerman in his short film. His one-take film is no more than the camera moving to the left, slowly, lingering, past a line of people. It’s fascinating and suspenseful. You wait for something to happen, and if it’s only at the end. Now, in Akerman’s film, I didn’t feel the same suspense. Maybe it is the dark atmosphere in Tarr’s films that conjured the suspense. In any case, there is an almost identical shot in her film. And that wasn’t the only one. I have written down Sátántangó

during the screening and then wondered who influenced who. Maybe there was no influence at all, and both had similar ideas at the same time. I do believe in those circumstances. But the similarities between Akerman and Tarr are intriguing, made me think a lot. And smile a lot whenever I saw something familiar.

D’Est has a kind of hypnotic feeling to it. Perhaps it is the long-takes of people at a train (?) station, looking at the camera, looking at us. Why do we look at them? What is it we are after? In Akerman’s film we have to ask ourselves those questions. I don’t think we can simply be observers. We need to engage, we need to pose questions, and respond to questions that the images pose. It is, in effect, a great slow film: it isn’t innocent. We cannot just sit back and look at the images. We have to engage with it.

The different slowness in Evolution of a Filipino Family

The Effects of Music and Dialogue