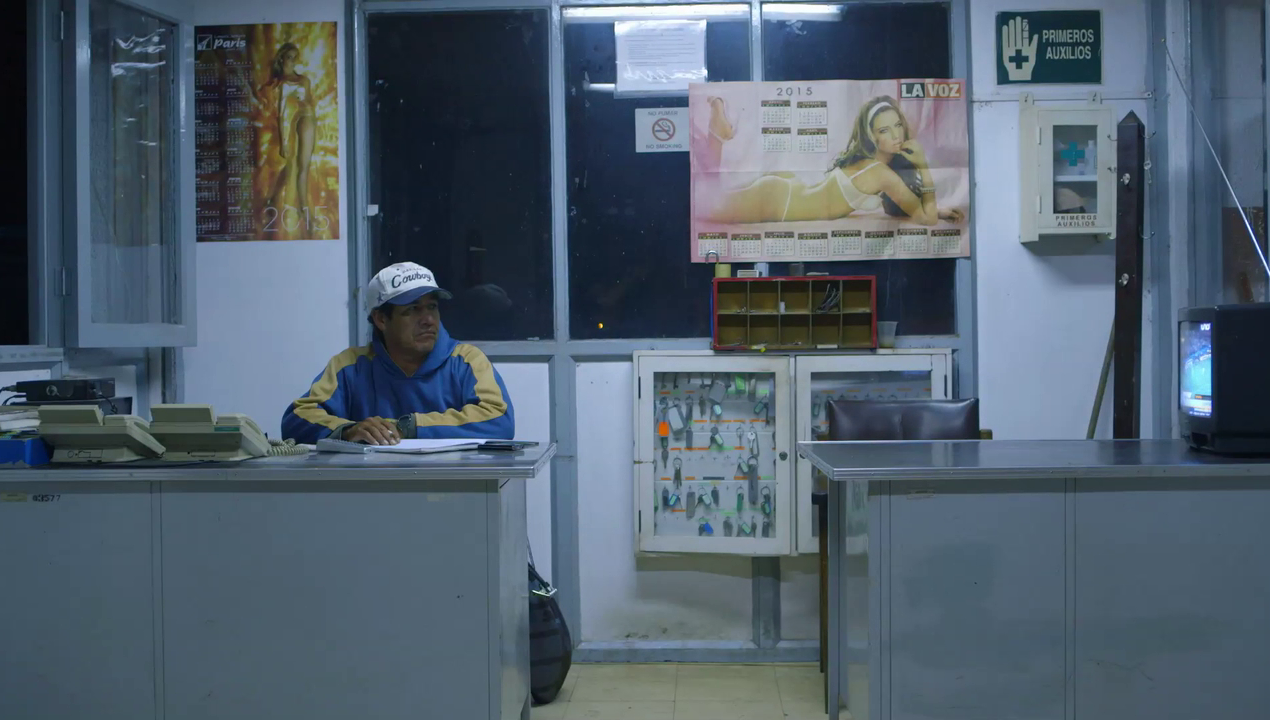 If there is a film that takes the ideas of absence and nothingness almost literally, then it is surely Sebastian Cordes’ new film A place called Lloyd (2015), a moving portrait of the Bolivian airline Lloyd Aereo Boliviano gone bankrupt. The story in itself is not unusual. Many companies go bust every day throughout the world. What makes Lloyd stand out from the crowd is its particular focus on the (former) employees, who still return to their work as if nothing has happened. Paperwork is being done, material is being cleaned – it all appears to be a routine job. Yet the disastrous bankruptcy and the fact that the employees still haven’t been paid their salary hangs over the film like a ghost. It’s a characteristic present absence which is felt throughout the film’s running time.

Lloyd, in its aesthetic approach, reminded me of the first Denis Côté film I saw, which was Bestiaire

the focus is obviously more on the beast than on man), but there is a certain sensation of absence, of loneliness, of isolation that characterises both films. It is often said that slow films show “nothing”, which always reminds me of the famous “watch paint drying”. But even that is something! Anyway, the reason why this idea of nothingness fits so well with Cordes’ new film is the narrative he has captured. It is the particular combination of aesthetics – empty or half-empty frames, a minimal soundscape – and a narrative of loss.

To me, Lloyd fits perfectly into my belief that slow films tend to deal almost exclusively with death. I’m not speaking of literal death. I am more interested in metaphorical death. In this case, it is the company which has seen its death, and therefore a part of people’s lives has gone. Again, the aesthetics are supportive of that. Cordes proves to have a photographic eye. Most shots a superbly composed. He captures the beauty of simplicity and it’s fascinating that he has found this in deserted hangars and offices. But he has also found it in the interaction of those elements with nature. I remember those lovely shots in which the rain comes down on a deserted aircraft…

I want to return to Bestiaire

for a second. The visual similarities cannot be denied. I cannot say whether Cordes intended it to be this way. Regardless, the imprint of the Canadian director is very much present and felt. But Cordes creates more than a visual document. He lets the people he observes in their routine speak. He lets them speak to us. The effect is that we are no longer detached from what’s happening miles away to a few employees somewhere in Bolivia. Lloyd becomes a personal portrait of what this company meant and still means to its employees. In each shot, you can feel the pride of the people of having served one of the first airlines that had been set up in the world. Their pride swings in everything we see and hear.

Lloyd is certainly character-centered, more so than perhaps other slow documentaries. Another one I can come up with is Solitude at the end of the earth by Carlos Casas, although the landscape plays an important role there. This isn’t quite the case with Cordes’ film, even though the actual place where the documentary is set is important in that it creates this atmosphere of absence, of loss, and of metaphorical death. Nevertheless, this is the story of people and Cordes’ Lloyd is a wonderful portrait of those the film depicts. The film shows that Cordes is a talented upcoming slow-film director whom you should follow if you’re particularly interested (like me) in contemporary, very recent slow films.