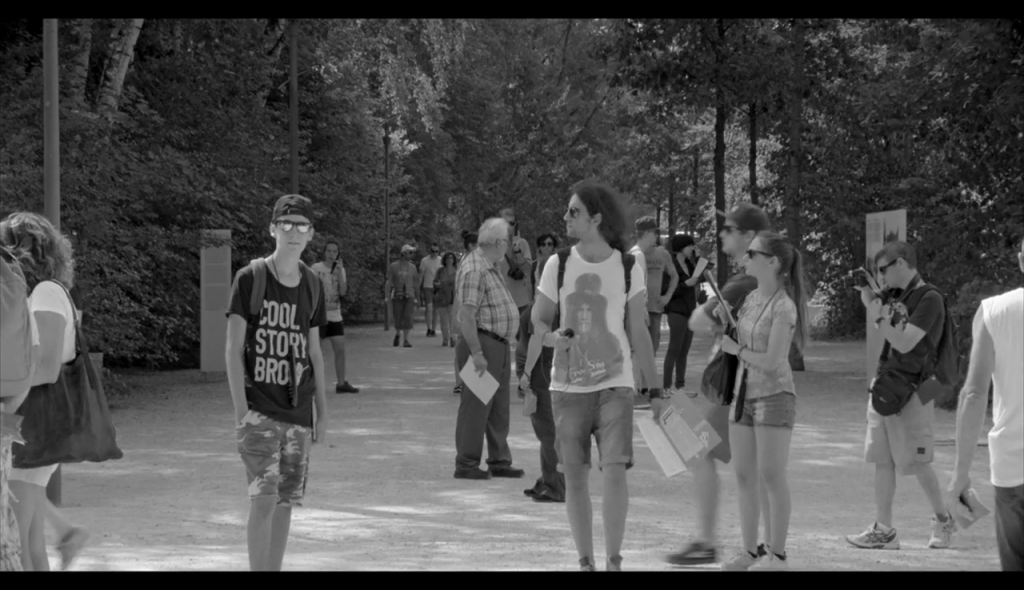 I wasn’t prepared for this film being a slow film. Of course, I expected Sergei Loznitsa’s Austerlitz to be slower than the average, but I didn’t expect the film to fall into my category of Slow Cinema. It does, however, and it’s a film that poses so many questions; questions about how we remember, how we deal with the past ethically, and whether we are still acting ethically in the ways in which we remember the persecution and attempt at total extinction of the Jews in Europe.

Austerlitz is set in the grounds of two concentration camps. If you hadn’t read about it before, you would notice this only in the third scene of the film. Loznitsa doesn’t make it obvious from the first frame where we are. Instead, we see people looking at something we do not see. Loznitsa is careful not to show us what they see. We do not get point-of-view shots. It is not that kind of film. What is important in Austerlitz is the study of people visiting former concentration camps that have been turned into museums. The film is not about the extermination of Jews. It is not about showing the atrocities committed by the Nazis in the 1930s and 1940s. On the contrary, Austerlitz is about how we today, in the 21st century, decades after the end of the war, deal with this part of our history.

Loznitsa uses a static camera throughout. A flow of people walks past, looking around, taking pictures. Yes, what the film is about is looking. It is about seeing. It is about what the French would call the éthique du regard, the ethics of looking, of watching, of internalising memory. The director stands back from what’s happening in front of the camera. It seems as though he simply put the camera somewhere and the rest unfolded by itself. And as such, he couldn’t have created a more interesting portrait of how modern society deals with a part of memory that it so important to keep. Two people that stood out for me right at the beginning where this young man wearing a t-shit saying “Cool Story Bro”. I’m not sure there could have been a more tasteless shirt for an occasion like this. Then there is a young woman who entertains a group of people by putting a bottle of water on her head while a guide is explaining the uses of prisons in Sachsenhausen concentration camp.

Loznitsa’s film shows the gulf between the second and third post-war generation. In several instances, his camera records an indifference of the latter. But it’s not just them, though. People of all generations take selfies in front of one of many infamous Arbeit Macht Frei gates. People with selfie sticks are everywhere. They do not look at the remnants of the past; they merely record it with their phones. The culture of smartphones has changed the way we deal with the past. We take a picture of everything, regardless of what the photograph shows. People take photos first before they help other who’ve been in an accident just because.

I would say that we’re living in a click-culture, which is at odds with memory. Photographs do not help us remember. They help memory to fade. What is important is that we see things with our own eyes, only then can we feel what it means to be at a certain place. If anything, concentration camps (I’ve been to one) are about the experience of being at a place haunted with death. What Loznitsa shows is that, today, it seems to be about going there, taking selfies, and posting them on social media. Is that how we remember today? Is this how we can stop the past repeating itself?

In all of its long takes, Austerlitz shows that sites of memory are no longer used only to remember. The sites are consumed. They have become part of our devastating consumer culture, which makes it so difficult to make people to experience something for longer than just a few seconds. It often appears as though the visitors cannot grasp what happened at the time, yet the reason is very simple: time. Loznitsa takes the time to observe people not taking their time to observe. They take a photo and continue their way.

At the same time, there is something ethically questionable about the film itself. Several shots are beautifully framed, such as the one around half hour into the film. We see a group of people huddled into a small room, most of them trying to take pictures like paparazzis. The shot is beautiful. It’s simple, a white wall and an open door. Nothing but that. How do you frame death, or the present absence, in concentration camps? Should a director make his shots aesthetically pleasing in such a context while at the same time pointing to the malady of contemporary society to simply take nice pictures at a place of death? To pose at places of death? It’s something that I haven’t come across yet in reviews of the film, and it might be worth looking at the film from this angle, i.e. from the possible implication of the director in what his film seems to criticise.