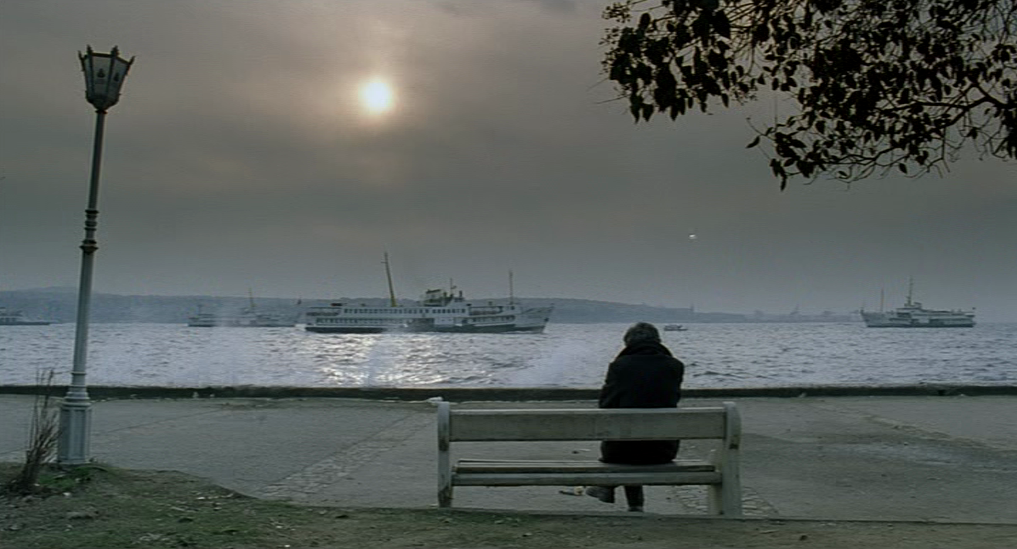 , a film from 2002 and, even though not his first film, possibly the first well-known film of the Turkish director from Istanbul. It’s my third film by the director. After I had seen his latest film Winter Sleep, I really wanted to see more. I was curious to see the director’s development over almost two decades of filmmaking. Uzak was the beginning of my starting to watch Ceylan’s films chronologically. Let’s see what I will find!

The story of Uzak is quickly told: Yusuf, a rather uneducated factory worker, travels to Istanbul to stay with his cousin Mahmut while looking for a job as a sailor. Things are not going to plan, however, and Yusuf prefers following a woman around the city rather than look for a job. He lacks motivation but so does Mahmut. The two couldn’t be more different, more distant. I return to the meaning of distance further below, because it is multi-layered and speaks volumes.

As is the case in Winter Sleep, Ceylan’s 2014 film about the divide between rich and poor, and an investigation of power, Ceylan’s outdoor shots in Uzak are gorgeous. In Uzak, the director plays with different lenses, similar to Alexandr Sokurov (Mother and Son, Faust). Ceylan doesn’t go as far as using mirrors, however. Rather, he uses painted lenses (or maybe even broken lenses?). In one scene, the top half of the frame is tainted in a very slight brownish colour, something that visualises the weight felt by Mahmut and Yusuf. It’s also a weight that comes from nature; the heavy, endless snow weighs down on the trees. The film feel claustrophobic throughout the 100 odd minutes with the exception of an outdoor scene in Anatolia. There doesn’t seem to be breathing space, neither for us nor the characters. Ceylan’s experimentation with lenses work well here because they reinforce this idea of claustrophobia, of weight, of heaviness, precisely because Ceylan positions the extra layer of light brown at the top of the frame.

In my head, I returned time and again to Winter Sleep, noticing the similarities Ceylan has kept up over the years. The use of snow is only one of many things. Ceylan uses it effectively to create an atmosphere of both peace and beauty, and of subtle, but boiling tension between his characters. Yusuf and Mahmut are different in everything they do…and stand for. Yusuf is a rather uneducated character, poor, aimless, without much motivation. Mahmut has worked his way up to become a renowned photographer in Istanbul. He has climbed the social ladder but now he no more than pretends to belong there. For him, “photography is dead.” He attempts to behave according to his position in society, but does so without motivation or aim. He simply aims not to lose face. It is for this reason that one evening he puts on Andrei Tarkovsky’s Stalker. It’s supposed to be for intellectuals, so he pretends to be interested but switches to a porn VHS as soon as Yusuf has gone to bed. In the end, the two characters are not as different as they might look like at the beginning of the film. In their heart, they are the same. They are only different because Mahmut plays a role that doesn’t seem to suit him. It is like a heavy coat that he cannot take off.

Ceylan contrasts rich and poor, educated an uneducated. But the quest for love remains the same for both characters. Both Yusuf and Mahmut long for love, the latter presumably still in love with his ex-wife who leaves for Canada with her new husband. The former sees a young woman in the streets when he arrives at Mahmut’s place, but whenever he is close to her or wants to approach her, something or someone comes between them. Unfulfilled love – a current that is running under the main storyline and unites the characters that seem so different. It is also here that the theme of “distant” and “distance” comes into effect. Ceylan creates several distances in his film. There is the distance between the two male characters and women. There is something they’re outside of. They cannot get into this world of love, of emotional bonds. It’s something that happens around them, as we see in one scene in which Mahmut sits in a restaurant by himself, having had dinner. A couple arrives. He knows her, she keeps awkwardly looking over to his table without trying to raise the suspicion of her partner. Mahmut leaves, avoiding the situation, putting a distance between it and the situation. Happiness with a woman – that happens elsewhere.

There is a distance between Ceylan’s two protagonists, as I have mentioned. There is also the distance between social classes that often cannot be overcome. Mahmut has alienated, distanced himself from photography, arguing time and again that photography is dead. Ceylan creates several forms of distance, all of which (apart from Yusuf having left his home) are an expression of his characters alienating themselves from their outside world. They close up, they detach themselves from what is happening around them, while at the same time longing for being a part of something, for joining. Uzak is essentially a film about growing isolation and solitude; it is about an often self-inflicted distance the reasons of which aren’t explained in the film. Indeed, this is one of the trademarks of Ceylan’s films: things are the way they are. The director doesn’t try to explain them, he simply shows them.

I’m not sure whether I can agree to the general opinion that Uzak is Ceylan’s best film. It is a good film, beautifully shot, and intelligent. But I would not (yet) go as far as declaring it his best work. I need to see the rest of his films first before I can judge this properly. I loved Winter Sleep but haven’t so far been able to put it into the context of the director’s full filmography. We will see!!