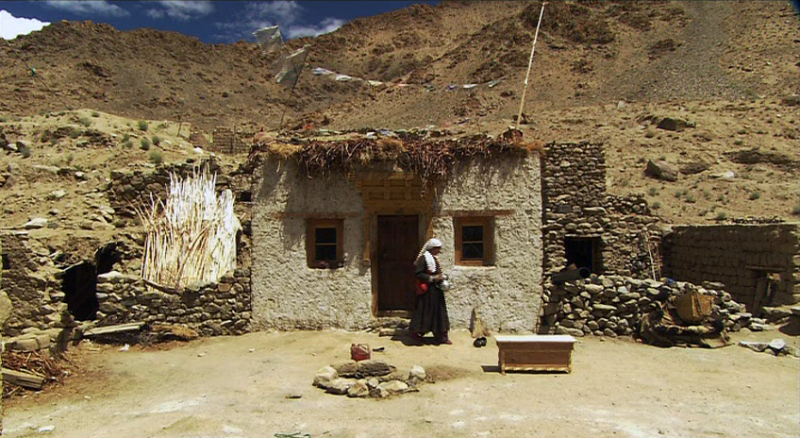 I have one specific sequence in my head, and what it shows and what is said doesn’t get any weaker with time. An elderly tribes man from Indonesia, sitting in his tree house, tells us that it wouldn’t be good to kill bad people because this would only anger the dead person’s family. For some reason, this sequence has burned itself into my memory. Perhaps because of its simplicity, of its plain and simple logic that modern people, especially politicians, have lost or forgotten about a long time ago.

Nikolaus Geyrhalter’s Elsewhere (2000), a fascinating four-hour long-form documentary, is perhaps one of the best films I have seen by the director. Of course, Elsewhere has strong competition. I will never forget the astonishing Homo Sapiens, or the curious Pripyat. Geyrhalter is a documentarian with enough patience to tell important stories, those stories that don’t make it into our field of vision because we’re saturated daily with short-lived story bites that will never stay in our memories. Elsewhere is, however, a powerful example of what time, or rather long duration, can achieve in exploring the world, in exploring life outside of our personal ordinariness, our “normality”, our “modernity”. It allows us to see the wealth around us, the differences, the similarities, in fact everything that makes us human.

I still remember the 31 December 1999. There was a real hype about it. We would be crossing a magical threshold. Tomorrow would be the beginning of a new century. What would it bring? One thing that was clear, at least on telly, was that no one could tell whether the hundreds of nuclear bombs the world hosts would go off all at once because of a computer error. Excitement switched to anxiety, and it became the more apocalyptic the more time passed.

This is, one must admit, the downside of modern life. It can kill us at any moment, and it can do so faster than any traditional life we used to have before the Industrial Revolution sped up our life beyond something we would ever be able to control. Geyrhalter traveled the world and his film is a look into the past, yet a past that is still very present, albeit at the margins. The director is on the lookout for traditional societies, which do not comply with our idea of modernity and therefore of progress. Beginning in Niger, with the lives of the Tuareg, Geyrhalter stops in 12 different regions of the world to show us what has been and what still is. Niger hosts around two million tuaregs. They live in the desert, in vast empty spaces that many would deem hostile. The colours are beautiful, and Geyrhalter’s low-angle camera allows us to get down to the same height as several actions we see. The Tuareg sit on the sand, on stones, or they spend their time traveling on their dromedars. It’s not often that we see them stand up or walk. The most impressive images, to me, are those of low-angle stillness or movement. Three women sit int front of the camera, speaking about the difficulties women face when bringing up children. “They’re hungry all the time,” they say. Only when they grow up do they become useful. A man is afraid that the bush will one day no longer feed the people and that the Tuareg would have to move into town in order to survive.

It’s those interviews, sometimes snippets, that are particularly intriguing in Geyrhalter’s film. He does not simply film what’s in front of his lens. There is an interaction apparent, and there’s no intention hiding it. In Namibia, one hears the interpreter in the background. The presence of the other is not cut. It’s supposed to be there. In Ombivango, shown in beautiful long shots, a man tells us that his job is examining court cases. He tells us that it’s important to prevent the destruction of the environment and that poachers need to be prosecuted. There voilà, the documentary becomes a reminder, perhaps a lesson that we should learn from those who live with the resources they have, knowing that one cannot live on credit, especially not when it comes to natural resources. An inconvenient truth? Maybe, but Geyrhalter doesn’t create an openly environmentally-friendly documentary. This wasn’t his aim. The aim was to observe tradition, and observation is an essential part in a longer, a slower learning process. Elsewhere is an invitation to observe and to learn, to remember what we have forgotten.

The vast landscapes in Namibia and Niger are juxtaposed with vast landscapes in Greenland and Finland. Reindeer herding and seal hunting – it is here that modernity and tradition clash. A snowy landscape, at night. It looks and feels like the middle of nowhere. But there is a petrol station, a view one would perhaps not expect high up in the north, the farthest north of Finland, far off human civilisation. Civilisation – that are hundreds of reindeer that need to be looked after. Hansa, one of the few Sami people who can still live off reindeer herding is detached from society, but merges with his wintry environment. He becomes one with it. As do Otto and Asiajuk, seal hunters in Greenland, who tell us about the way their work has changed because of Greenpeace activism and Brigitte Bardot. The macro clashes with the micro, the seen with the unseen, unheard, the international with the local. Everything affects everything. This is why sorcerers in West Papua, Indonesia, we are told, are no longer being killed. They are “sent to town”, villages which white men have built in order to settle there. The magnificent tree houses the tribe builds with simple means are mind-blowing. And yet, one wonders when the white men, who live next door, will come too close to this part of simple and traditional life that has survived for centuries. Further south-east, in Australia, the Aboriginals tell us that they want to keep their identity, all the while adopting parts of “white”, or European (as they call it) modernity. And so, while we witness traditional dances, bush fires and hear about circumcision rituals, Aboriginal boys are seen glued to a television over a video game. It seems like we’re witness the merging of two disparate worlds, two opposing times.

July opens with a beautiful shot in India. A woman hums while preparing tea for everyone. It’s difficult to guess her age. She seems radiant, content in her surrounding. “We should all try to live together in peace,” she says. To her, it’s important to share things with others. It all started with an argument in the village about water. Now, she shares everything she has with everyone. Making up for mistakes in her previous lives, she says.

What characterises the second part of Geyrhalter’s film is its particular beauty. I had the impression that the director tried to go a little further, enhancing his already magnificent work. At the same time, he moves closer to us. In Russian Siberia, we meet Josip, whose livelihood has been destroyed by oil companies which moved into the area. A native reindeer herder, Josip no longer knows how to live in a polluted, toxic environment, which kills ducks, geese and fish around him. He speaks of the past and how everything used to be better. He sits on a rock at the shores of the sea. Again, Geyrhalter uses a low angle. We’re on the same height as Josip, which makes the interview incredibly personal and intimate. It’s one of the film’s strength – the intimacy between us and those far away. Geyrhalter bridges geographical distances by choosing the right height of the camera.

It was in 2012, when Wang Bing filmed Three Sisters. A beautiful portrait of three sisters, left behind by their father who works in the city. It’s a portrait shot in the Chinese region of Yunnan. Geyrhalter filmed in that region about a decade earlier. He, too, portrayed the people, albeit the adults more than the children. It seems to be the first part, in which we listen to ongoing dialogue between characters. It’s striking because it’s not something that we’ve been used to in the previous three hours. Women cook, chop vegetables. They are amongst themselves, and it’s here that it becomes evident that the director tries to keep the societal structure within the groups he films intact on film. One woman tells us that people have “walking marriages”. A couple doesn’t move in together. A mother wouldn’t want her daughter to be raised by another woman, for example. So each stays in his/her own respective family. No one ever moves out or away. It’s something, which Han people (the main ethnic group in China) cannot understand, she says. The idea is not only to keep the family together, but also to preserve land. If a couple has 10 kids and each of them marries and builds a house, space for farming will become rare. This is how it works in traditional societies. Children move away and build new. Not so with the Moso people.

There are two main themes in Elsewhere. First, we have the theme of roots, of home, of tradition. The theme of the past, if you wish, a past that is continuous. The other, opposing theme is that of the present threat to this tradition. There is talk of “the white men” who have built villages in West Papua, those who now prevent the natives from killing sorcerers. There is talk of Greenpeace and its fight against seal hunting and its difficulties for the natives in Greenland. Then there is Denis, a Nisga’a (Canada), who had been sent to residential schools where he was beaten until he no longer spoke the tribe’s language. When he returned home and spoke English only, he was beaten at home, because he no longer understood the Nisga’a language. Tradition was beaten out of him. There is Luigi, a traditional fisherman, who still lives without electricity and running water. “Working doesn’t pay anymore,” he says. Fishmongers only want beautiful fish for the restaurants. Only poor people eat ugly fish. In Micronesia, on the Woleai Atoll, the US dumps what has become known as “Christmas drop”, stuff Americans no longer want are dropped off on the island for Christmas in the hope the natives could use this modern junk. What they use are the parachutes which are used to drop the “drop”. They’re effective mosquito nets…

How would Elsewhere look like today? How has life changed for those twelve tribes/families? I couldn’t help wondering. Elsewhere is an intense documentary that benefits from its long running time. Even though we spend only about twenty minutes with each family, Geyrhalter makes those few images count and leaves us with poignant dialogues and at times breathtaking images that, all together, create an intense film experience. It’s a film that makes one think and wonder, and makes one hope that Geyrhalter will redo this project so that we can see how things have changed. I’d give anything for it!

(Elsewhere is part of the wonderful DVD box set that Icarus has released earlier this year. An absolute must for me, so do check it out! More info on the Icarus website! Read my review on Geyrhalter’s other films, also on The Art(s) of Slow Cinema: Homo Sapiens, Pripyat,  and Abendland.)