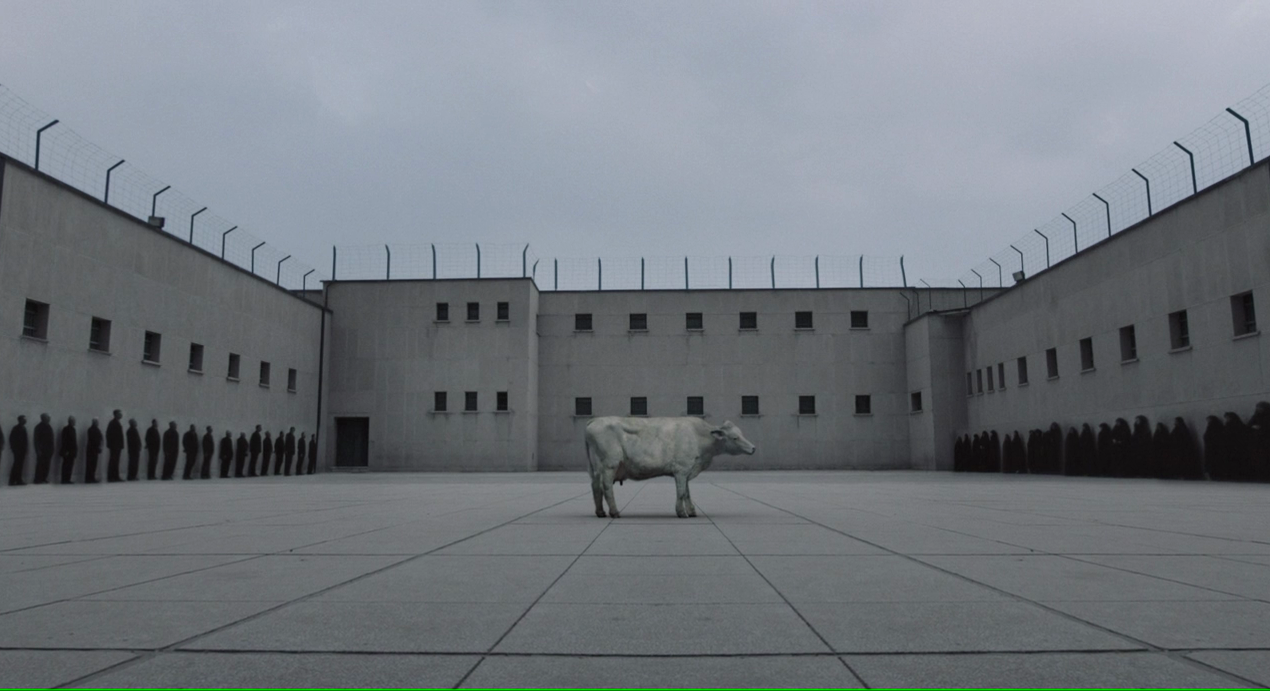 It’s like a dream. Or a nightmare. It’s mysterious, ominous. We’re in the centre of a prison court. The concrete walls are lined with male prisoners. Everything is quiet. Not even birds can be heard. A white cow stands in the centre of the court. We move closer and closer to it, until the camera brutally cuts.

Modern-day Tehran, Iran. Mina learns that her husband has been sentenced to death for murder.

I’m here for a visit.
It’s not visiting hours.
He’s about to be executed.

There it is, the first pinch. A guard leads Mina through the thick prison walls, corridors upon corridors of solitude, of punishment, of hopelessness. There is no life in this prison, where she finds her husband Babak, destitute, his body slumped over, behind a thick iron door. It’ll be their last rendezvous.

Papa went far away. He worked in a prison, but then he decided to study. He had to travel very far — this is what Mina tells her deaf daughter Bita. She’s like her father: a film fan, an addict almost. She loves going to the cinema. It used to be her favourite past-time when her father was still around. Every Tuesday. The images excite her, the stories let her marvel. This world on screen creates something magical for the little eight-year old. The movies are a way for her to stay in touch with her father, to feel him and to imagine that he was around her.

Where did he go for his studies?

Babak killed another man, they say. Witnesses saw him. He was brought before the judge and his life was over. They executed him shortly after Mina saw him for the last time.

In 2021, 365 people were executed in Iran. One person a day. And these are the official numbers. Debates on the death penalty are often black-and-white. You’re either for or against it. In the West, we typically consider the death penalty barbaric and an example of authoritarian regimes. That Turkey still uses the death penalty is one (of many) reasons they cannot adhere to the European Union. And yet, we never consider the US an authoritarian regime and are happy to cooperate with them, even though they continue to botch executions and let prisoners suffer inhumanely.

The death penalty is not a subject we can simply look at from the outside. It needs a moral, ethical and philosophical debate. If a country has laws that make murder punishable, should the state not also adhere to its own laws? What right does a state have to kill its own citizens? And this draws larger circles. If we accuse countries that have the death penalty of not being progressive enough, where do we position the West’s targeted execution by drones of its own citizens in the Middle East?

Ballad of a White Cow sets out to engage with the morality (or the lack thereof?) of the death penalty. Witnesses can fail, witnesses can lie. Memory is never fully reliable. Babak was wrongly accused and executed. Mina, his widow, gets a lukewarm apology, and she will receive what they call blood money: 270 million tomans, which often takes years to be paid. Perhaps there is hope that the widow would die in the meantime and that the state wouldn’t need to pay the money after all?

This is the second pinch. The value of a human being.

There is a price tag on everything.

For Mina, the real fight begins when that of Babak, who fought against his wrongful imprisonment, ended. She seeks justice in a system that isn’t so much about justice.

We can’t deny people their rights. The death penalty is a human right.

Her landlord kicks her out of the house after she had let an unrelated man into her flat. Flat agencies refuse to help her because “widows, dog and cat owners and junkies” are an absolute no-go. She loses her job because the staff members protested for better pay and work conditions. Some of the staff were arrested, others were fired. Her father-in-law goes to court over the custody of Bita.

And one day, there is a woman at her door. Mina only briefly opens the door, then shuts it immediately. The widow of the murdered man, of the man who everyone believed was murdered by Babak.

Now my husband is dead and they murdered yours.

The third pinch. The tears, the sound of a woman in despair. It feels as though the white cow is slaughtered little by little. There is no quick relief for her. There is no quick way out. The pinches keep coming and that despite the film’s quietness, its smooth progress, and a strangely warm and familiar feeling.

Despite all the difficulties Mina is facing, they are alleviated by the presence of Reza, a former friend of Babak’s. He helps her financially, he helps her find a new home, he helps her where he can. But all the time, he is absent, caught in his own world away from reality.

Reza, the judge. Criminal judge. He’s new. He came from a different section but moved to the criminal court. Now, he is sentencing people to death. His son, who has just been drafted into the army, hates him for this.

Someone has to do the judging. What would all these criminals do if there were no death penalty?
What they do in places that don’t have the death penalty?

Al-Baqara — the cow. This surah forms a large part of the Qur’an. Among many other subjects, it speaks of the so-called Qisas: an eye for an eye, a tooth for a tooth. In Iran, among other countries, this ancient practice is still in use. If you kill a human being, you too shall be killed. If you take someone’s eyesight, you too shall lose your eyesight.

Like Dostoyevsky’s Raskolnikov, Reza is weighed down by his conscience. An eye for an eye, a tooth for a tooth. He may find redemption in the person of Mina, but we know the Dostoyevskian tale. Nothing is more difficult to achieve than redemption.

There is no road that is harder to walk on.

The next step – The Art(s) of Slow Cinema Journal