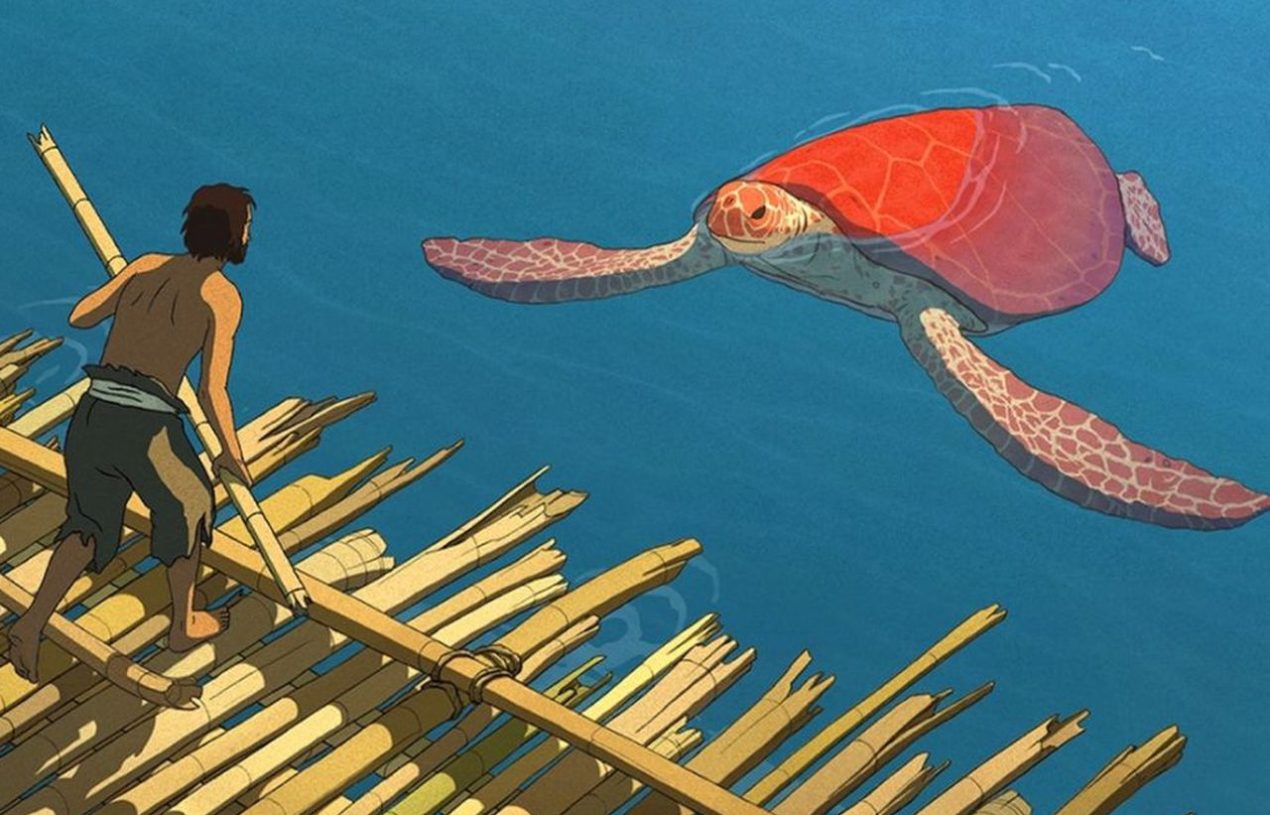 I believe this is the first animation film that I’m mentioning on this blog. I haven’t heard a lot about slow animation before, nor am I really a fan of animation. But it’s different with Michaël Dudok de Wit’s The Red Turtle. One could easily argue that the film doesn’t fit the Slow Cinema categories I have established on this site in the last five years. That was my very first thought, too, when the film had started. A lot of movement, comparatively quick cuts – there was something that made me wonder why some people have described this film as being slow or contemplative in the past. Just over an hour later, I agreed with those people and it is, funnily enough, the aspect of movement that, in parts, contributed to my change in thinking.

On the surface, The Red Turtle does not take its time with anything. In effect, the film tells the story of life in under seventy minutes. A man is caught up in a storm, is stranded on an island, tries to escape but a red turtle prevents him from doing so. In subsequent scenes, he falls in love, has a son, the son grows up pretty fast, leaves the island and he himself dies. So basically, it’s the natural circle of life told in a short time frame. In case you’ve been following my work for a long time, you probably know that I would always advocate for length in order to allow for an in-depth depiction of whatever is on screen. For The Red Turtle, this is slightly different and even though the sudden speed with which the story developed was startling at times, the film didn’t lose any of its smoothness.

And this is the key of the film that makes it so wonderfully slow and contemplative: its smoothness, its beauty. The Red Turtle is a magnificent, poetic piece that, despite looking like a speedy story-telling rollercoaster on the surface, takes its time. This sounds contradictory, I agree. And yet, apart from one sequence towards the end of the film, all scenes give the impression that life moves slowly, that it progresses in its own time. I mentioned the aspect of movement before. Especially character movement is not necessarily a major thing in traditional Slow Cinema. It’s there, but it’s limited. What struck me in The Red Turtle is the perfectly smooth, sort of zen movements. The film’s characters swim a lot, for example, and they do it, in parts, to enjoy the very act of swimming, to swim with turtles and imitate their slow and graceful movements, to become one with the still sea that surrounds them (up to a point, one should say).

Then there is the aspect of isolation and loneliness. The story is focused, first of all, on a single man only. He looks for food and for drinking water. He builds a raft in order to escape, but there is only so much you can do on your own on an island. So what the film does show is limited, is repetitive, is the daily survival of a man stranded in the middle of nowhere on an unnamed island. Curiously, once he gave up trying to escape, the film becomes very peaceful. It was his anger that gave the impression of a speedy story development, his rage against natural forces. But after that there is a real shift in tone in the film that, once established, made me sink into my seat and observe the images. I didn’t actually watch the film, I observed it. I wasn’t even distracted by the music. On the contrary, they helped me to feel the sort of isolated, limited life which, at the same time, is a life of complete freedom.

There is something mystic, something metaphorical about The Red Turtle. I felt that the film spoke about a million things, and yet only about one essential thing: life. In some ways, just like with major slow films spoken about on this blog in the past, the film’s utter simplicity, also in its drawing, highlights the beauty of it; of the film itself, of the story, of nature. I often thought about Chinese painting (I can’t let it go!), and was reminded of how often slow films focus on nature. Crucially, there is no dialogue in the film. Thoughts and feelings are expressed by actions only. Body language is the centre of the film, and aligns itself, once more, with other, more known and popular slow films. So maybe you begin to see the contradictory nature of The Red Turtle. Nevertheless, or maybe despite this, this animation film deserves being on this blog. It’s an interesting hybrid that made me rethink the framework I have established for myself. At the same time, it fits almost perfectly, and I’m absolutely delighted that it’s this film that has become the first animation mentioned on this blog. The year starts off well…