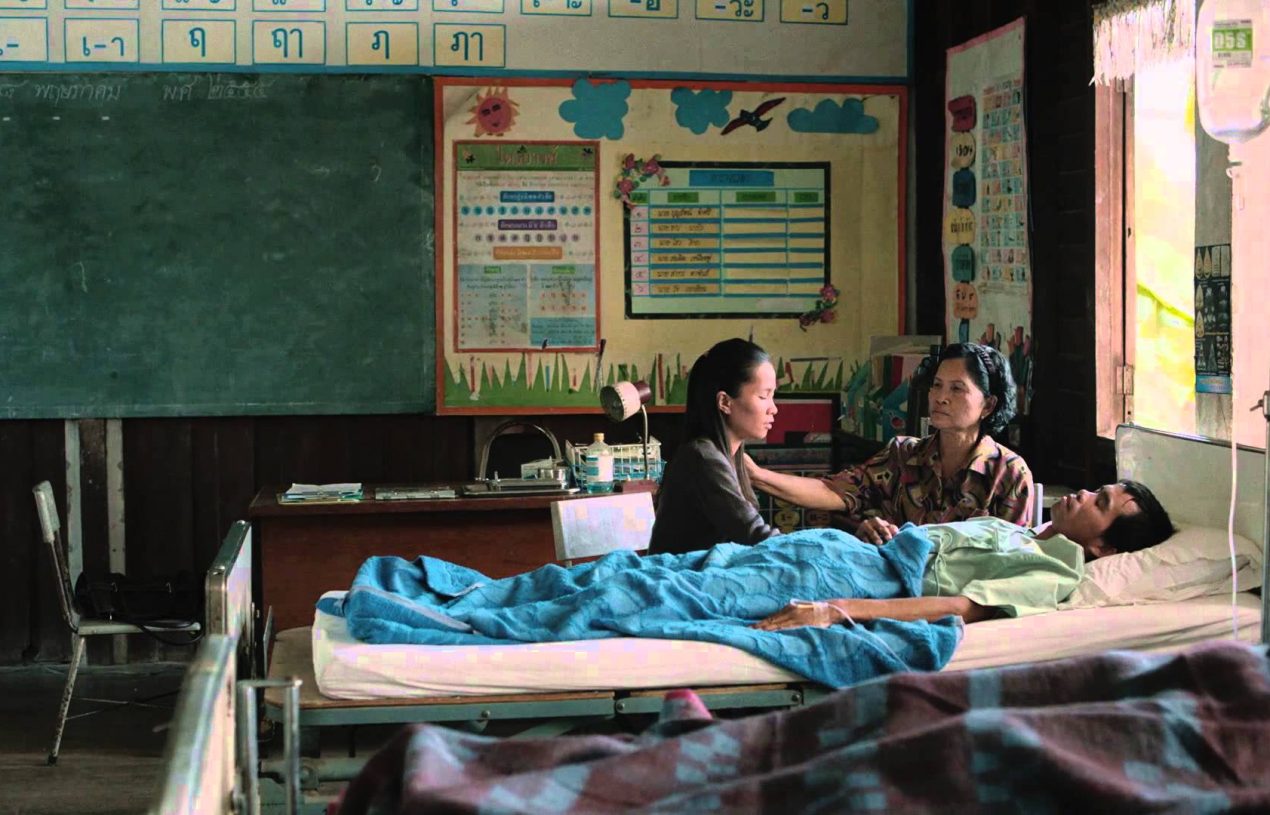 I need to make a general observation about Apichatpong Weerasethakul first before I go into detail about his new (and wonderful) film Cemetery of Splendour (2015), his Cannes entry five years after he won the Palme d’Or with Uncle Boonmee who can recall his past lives. Apichatpong is very often regarded as one main player in the field of Slow Cinema. It is true that especially his early films are very slow and use the long-take long shot combination with little dialogue attached to it. Since Uncle Boonmee, however, Apichatpong is moving away from those strict Slow Cinema aesthetics. This doesn’t mean that his films are not slow. They are, but his films are less strictly Slow Cinema. His films have shifted seamlessly into the broad category of arthouse cinema, which is always slower than the average film. I noticed this shift when I watched Mekong Hotel in 2012, and Cemetery of Splendour

is another example. So I’m not even sure whether this post should be on this site or not. I also feel as if I need to point (once more!) to the critics who all said that Cemetery of Splendour

was Apichatpong’s best film – and at the same time his most accessible. Again, accessibility guarantees success with critics, as we have seen with Lav Diaz before. Just don’t give critics a film they need to puzzle together.

I used this phrase in my previous post already: “regardless of its pace” – Cemetery of Splendour

is a wonderful film. It has a dreamy, meditative atmosphere around it. Jen, Apichatpong’s all-time muse, tends to a soldier suffering from an unexplainable sleep sickness. As usual in the director’s films, it is at some point difficult to distinguish between reality and dream. The line between the two couldn’t be thinner. I don’t agree to the comment that Cemetery of Splendour

is Apichatpong’s most accessible film. Story-wise it is, perhaps, because what is happening to the soldiers is explained to the viewer. I found it a bit disappointing. I would have rather kept wondering what went on. On the other hand, it worked nicely and it made the story even more intriguing (and no, I’m not saying what it is!). But this didn’t make clear what was real and what was just a dream or a hallucination, which, I find, also contributes to the respective accessibility of a film. If you think you have understood the story but actually cannot tell right from wrong, accessibility is a relative term.

I saw a brief interview with Apichatpong on French-German channel ARTE in which he explained a few things about the now well-known lamps he used in his films. I loved every single scene which contained those lamps. I found them fascinating, and they had something mysterious and supernatural to them. Something that helped blur the line between reality and dream, between life and death. Apichatpong said that he had read something about the link between light, memory and sleep – a fascinating point I would love to investigate further.

I’m not entirely sure whether it has been written about already somewhere. I noticed explicit references to Tsai Ming-liang and his films. During the screening I wondered whether this was intended (which I believe it was), or whether it was completely incidental. There are three references; Jen washing the body of a sleeping soldier called Itt (Tsai’s I Don’t Want To Sleep Alone

), Jen and Itt in the cinema, filmed from behind so that we can see the cinema screen as well as the back of their heads (Tsai’s Goodby Dragon Inn

) and a specific shot of escalators in the cinema, which had, to me, strong reminiscences of Tsai’s shots of interior architecture in pretty much all of his films. An homage to the Taiwanese director? Perhaps.

In any case, Cemetery of Splendour

contains quite a bit of food for thought again. There was this scene in which Jen says that she doesn’t like Americans because they are poor. She prefers Europeans because it is the Europeans who live the American dream. Interesting proposition, which led me to all kinds of thoughts. There is also a nice point about the preference of stone sculptures showing skeletons over a golden palace with a bathroom made of marble. Perhaps stone, even though it is always regarded as cold, is closer to real life?

I couldn’t help but think that Cemetery of Splendour

is perhaps Apichatpong’s most personal film. Perhaps not for himself, but for Jen, the main character and actress. It was a film very much tailored to her and her life story; a great thing to do in a way after many many years of collaboration. The viewer certainly gets to know Jen better than in Apichatpong’s previous films, and it feels as though we’re taking a unique trip with her through dreams and hallucinations. Or maybe we don’t. Who knows that with Apichatpong’s films!?

is perhaps not the director’s best film. I still favour Uncle Boonmee Who Can Recall His Past Lives

. Nevertheless, the film is another great demonstration of the skills of the Thai filmmaker. The visuals are at times superb. The story is fascinating and possibly more engaging than that of his previous films. Maybe that’s why critics liked the film more. The story is progressing easier. There’s less stagnation than in say, Uncle Boonmee Who Can Recall His Past Lives

. This may all be well for some people, but there is also a scene, for instance, towards the very end which screams of commercial horror. It neither fit nor was it in any way useful to the story. It was a scene that could have been seen in a commercial film, i.e. it could have easily been cut in Apichatpong’s film. Why did he leave it in? I hope there wasn’t a pressure point for him, because despite so many producers from around the world involved in his filmmaking now, he has so far remained independent in his style. I hope it remains this way.