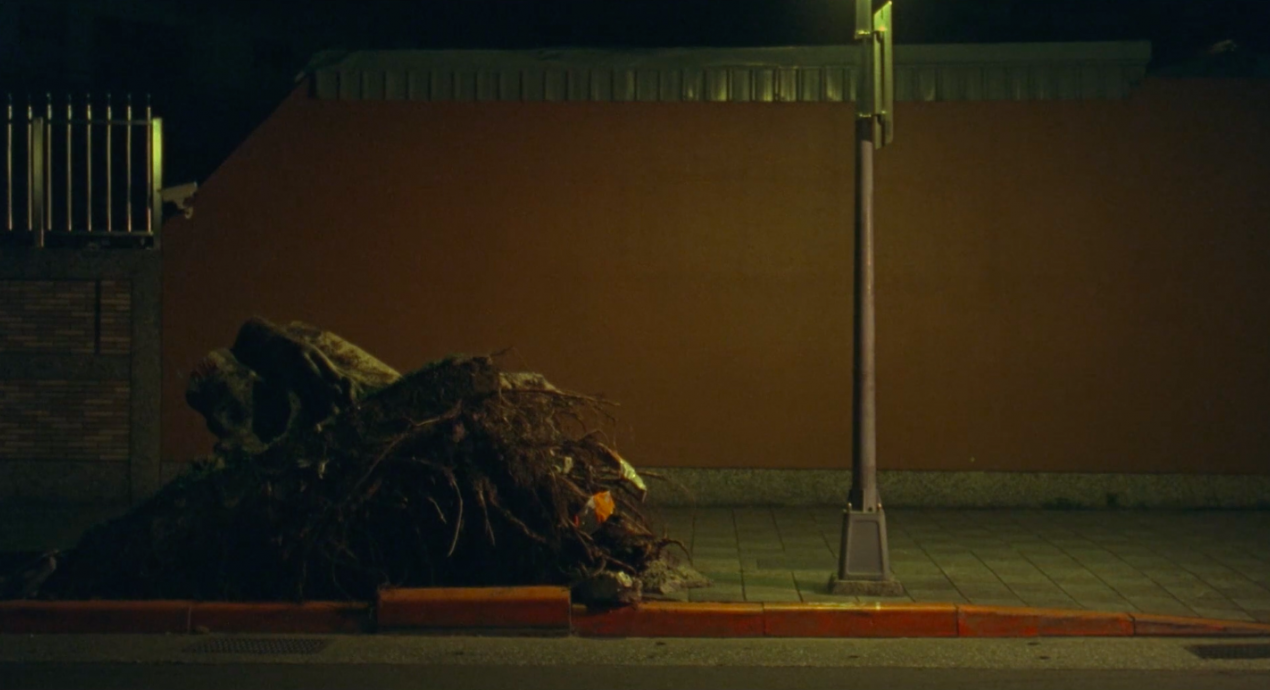 The beauty of Slow Cinema is that directors welcome you to their world and let you explore it in your own way. If you follow one director in particular and have seen all of his/her films, then each new film feels like coming home. I hadn’t realised to what extent this seemed to be true until I saw Nicole Vögele’s superb Closing Time, set in Taiwan, in an environment that feels so familiar after several films by Tsai Ming-liang. It is like sitting on that nice, comfy sofa that Tsai Ming-liang had prepared for me and which Vögele invited me to sit on to see her film. It is marvellous to notice the true force of slow films, which sink in and stay with you unconsciously, films that do make you feel as if you are there with the filmmaker.

The wind howls around us. Strong waves brutalise the coast. And then – peace. Absolute peace. The stormy sea gives way to an empty street at night. There is a large part of an uprooted tree on the pavement. Faint music. Rice cooking in boiling water.

This sequence of scenes feels almost like dream. It is like a ferocious journey at first, before it becomes an almost magical dream-like state. The alternation between noise and silence, movement and stillness, is a key element in Vögele’s film. Taipei at night, a city of contrasts. Closing Time tells the story of Mr Ku and his night-time eatery. His life, it happens at night. He chops veg, he cooks, he helps his wife serving customers. Despite the work in the kitchen, the eatery seems to be a haven for peace during the busy nights in Taipei. It’s a meeting point, it’s where workers come to eat, to have a chat. Mr Ku knows a lot of his customers. Eating there means becoming part of the family, part of a circle of people who follow their routine jobs in order to keep their heads above water.

The night in Taipei isn’t black. I was reminded again of the thought-provoking book Nuit by Michaël Foessel, the idea that the night has become something rare. Darkness has become light. The time for rest has become the time for work. Taipei never sleeps in Vögele’s film. The black of the night that used to be is now tinted in cold blue. The night that used to be is now an artificial day. At a vast market hall, shop owners on scooters shop ingredients. After a typhoon destroyed local harvests, people have no other choice but buy their products from the mainland. Mr Ku complains about the costs. Every month, he spends more on the ingredients, but the eatery cannot keep up.

Closing Time is about fragile existences, created by the night, by economic conditions, by a multitude of circumstances. There is life at the margins, a life which we don’t (want to) see, but which continues regardless. People make do. There is a beautiful scene half-way through the film that struck me as one of the most special scene cuts I have come across in recent years. For approximately an hour we follow the fragile existence of people, at times accompanied by the sound of ferocious winds and heavy rain, the coming typhoon threatening the people’s fragile existence even more. And then, Vögele cuts to a park, a literal but also a visual breathing space. There is a man playing the saxophone somewhere. He’s difficult to spot, but the beautiful, peaceful melody is just… it opens your heart.

So does a long, slow pan, which allows us to see the nature outside Taipei, a world that allows us to breathe, but that also shows the clear contrast between the world of the Nachtschwärmer, the night owls, and the world that seems to be out of reach for them. Mr Ku speaks about the necessity to take a break. His fragile existence also depends on his ability to rest, to break out of the hamster wheel which his life has become. Closing Time is very much about this hamster wheel, about the constraints that those at the margins have to abide by. But it is just as much a film about agency, about the liberty to take a decision that allows you to be. Instead of returning home and back to work, Mr Ku takes a detour with his scooter one day. He doesn’t seem to have a specific destination in mind. The only destination he drives towards is a badly needed escape, in much the same way the saxophone allowed us to escape from the eternal blue night earlier in the film.

Vögele’s film is a genuine gem. It feels as though she continues where Tsai Ming-liang had left off. It feels like a continuation of a world that slow-film fans might recognise, but she adds her own touch to this world. In an interview, she once said “For me, it’s not important if I shoot a film in Taipei or in Zurich. I think what really interests me is a really deep humanistic thing. Why are we here? What is human? I think that it’s not important where you do that.” But it’s important how you do it, and Vögele shows in Closing Time that she is well-equipped to explore those questions with her camera.