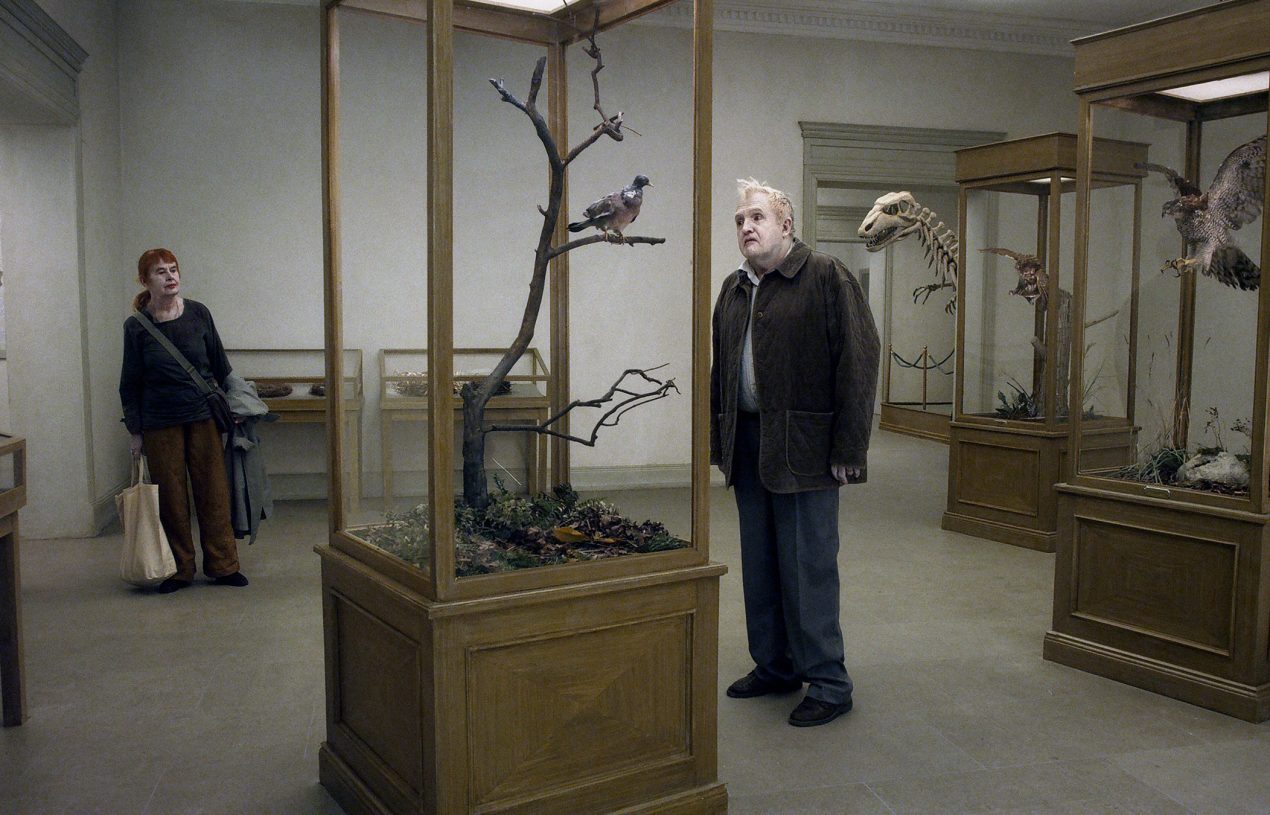 (2014), a film I remember was very good, but I was reminded of it only when Franco-German TV channel ARTE showed it not so very long ago. But what is there to write about this film, a film that is only a part of a trilogy which, taken all three films together, is so much stronger than a single film? I therefore watched the other two films of Andersson’s “Living trilogy”, albeit I would probably refrain from using this description and use “The Human Condition trilogy” instead. Together, Songs From The Second Floor

make for an entertaining view on us as humans, on us as a society, of life as sometimes being completely absurd and we still follow it endlessly like that famous hamster in his wheel.

After having seen the first two films in that trilogy, I was annoyed that I saw A Pigeon

before, so that the chronological development didn’t quite work out the way it’s supposed to. Nevertheless, I could see connections, contradictions, additions – all of that made the trilogy throughly interesting, especially if you have a dark humour and are willing to laughing about yourself. It’s difficult to write about three films in a single blog post, but I try to keep it as contained as possible.

I should start, perhaps, with the most obvious characteristic of the Living Trilogy: all films look the same. I’m not sure whether I have seen a trilogy of films before where everything seems to be the same. Even the characters look the same. Andersson does use different actors from time to time, but they’re always white. I mean, make-up white. They’re pale, exhausted, looking almost sick, half dead. The interior of their flats and houses makes you see (and feel) that time literally stands still. Andersson took a long time to complete this trilogy. Between the release of the first part and the release of the third part (all three films played at Cannes), there was a gap of 14 years. So maybe make it 18 years or so, between the conception of the first film and the release of the final part of the trilogy. This is slow, but it resulted in quality work. And while the years passed, life seems to stand still in Andersson’s work. This is ironic, of course, giving the title of the trilogy (Living), whereas it should perhaps be called otherwise. Or maybe this is the whole point? Maybe it is to show us that we’re running in circles and that we don’t really go anywhere?

The interior design of buildings in all three films is the same. Sometimes I would even go as far as suggesting that he uses the same flats for some scenes, shot from a different angle. This is what Béla Tarr used to do. If you watch his arthouse films from after Sátántangó

(2000), you see a link between them all, which is not necessarily connected to the films’ narratives, but to where the films are shot. Everything repeats, nothing moves forwards. Andersson uses a very sterile environment, 70s or 80s style, cold. Almost exactly how his characters look like. The bars change, but the people who drink their beer there are more or less the same. And why do they drink? Usually to drown their sorrows, the ridiculous existence of humans in a world that is so absurd that it makes you laugh.

Andersson shows us this absurdity in slow, long-takes. Those who like Slow Cinema and have followed my slow journey on this blog know that cinematic slowness serves different purposes in different films. In Andersson’s, I find, cinematic slowness serves the heightening of absurdity. It really brings home how ridiculous life can be sometimes, or how ridiculous we can be in certain situations; such as when a man’s hand is stuck in a train door and everyone stands around and, rather than being concerned, they wonder how it happened, they remember their own accidents, they watch. They watch more than anything else. An accident becomes a sort of animal in a zoo that you simply watch. You gather around and you do nothing. This stoppage of time, this absurd watching, is reinforced by the use of a static camera. Andersson usually doesn’t move his camera. There are very, very few pans or traveling shots in this trilogy.

And in fact, Andersson reduces the aesthetics to a bare minimum over a period of over a decade. It feels very much like the development of Béla Tarr, who became more and more minimalistic in his approach to filmmaking. From Sátántangó

to The Turin Horse

was, perhaps, his most minimalist film. Andersson, I feel, works very much in the same manner. Songs

and You the Living

were stronger in their narrative progression. If something wasn’t clear in one scene, he would usually show us what really happened or what the previous scene meant in the next scene. In A pigeon, Andersson fragments the narrative almost to an extreme. It feels more episodic than the previous two films, albeit everything does come together in the end. But there is a sense of fragmentation, of a fracture that disrupts the narrative flow. Is this a sign of trauma? Perhaps, given that the trilogy contains elements to the brutal reign of the Nazis.

Andersson’s trilogy is tragic and humorous. Albert Serra was the first slow-film director I got to know who used comedy elements in his films. Slow Cinema as comedy, as entertaining…Andersson goes there, too, but makes more persistent use of it. He does so in order to open our eyes, to hold a mirror in front of us and show us to ourselves. Perhaps it is not spoken about often in the context of Andersson’s films that the director uses a direct confrontation with history and the way we deal with it. The first two films show this explicitly; one character, a sort of hardcore rocker, wears a T-Shirt with the Nazi SS symbol on the front. You only notice it once he gets up from the bench, once his partner pushes him away because she no longer wants to see him. (Or does she?) It would go unnoticed if you were focusing on the frame’s foreground only. There is another scene in which a man, in an attempt to do the famous magic stunt, tries to remove the tablecloth at a big family gathering all the while keeping the (expensive!!) china service on the table. Once the table cloth has been removed, the table shows two swastikas. It’s still there, we haven’t finished with it. The Nazi past, the Nazi support, is still there; almost dormant and yet very present, if only one takes the time to look. Andersson encourages us to do so. I laughed about those scenes, and also about the 100 year old admiral who had been placed in a nursing home and receives high-profile guests for his birthday only to make a Hitler salute. In any other film this wouldn’t be funny, but Andersson has created a bizarre and absurd trilogy that you have no choice but to laugh. And this, I have to say, absurd reaction to things that should shock me made me reflect about where we are. I became the pigeon sitting on a branch reflecting on existence.

With Andersson’s work more so than with other directors I need to say that a lot of action is happening in the background. If you watch the films as usual, expecting things to happen right in front of your eyes (just as we expect it in life – we don’t want to look deeper than that), then you will miss a lot in the trilogy. It is worth taking your eyes of the obvious and look beyond the surface, both in terms of the framing and in terms of the narrative. It is in the background, underneath the surface, where life really happens. There is this wonderful trilogy The Human Condition

by Masaki Kobayashi. Kobayashi’s trilogy speaks of what it means to be a human being. He focuses on our hearts, on everything that goes on inside of us. Andersson’s trilogy is a different take of the same thing, 40 years later. It is also about the haunting of the past. Whereas in Kobayashi’s trilogy, events were happening, Andersson returns to the effects of the past on our present society, our current politics, our current life. It is impossible to say that these two trilogies are the same. But there are similarities, extensions, additions. They are are different ways of making us see and feel of what and who we are. And yet, both trilogies are about the human condition.

The Living trilogy – do Andersson’s characters live, or are they dragged along? Do we ever move on, which is what living is actually about? The pigeon who sits on a branch reflecting on existence is the perfect metaphor for what the viewer is encouraged to do while watching Andersson’s trilogy. What does “existence” even mean? We exist, but do we live? Where does life start and mere existence stop? Are we merely passively watching life going by, suffering from the weight of our existence and everything it entails? Strangely enough, even though none of the three films is very cheerful, Andersson’s trilogy triggered optimism in my heart and in my mind. What exactly causes that, I don’t know. But I do know that the Swedish director has created a very effective trilogy about us, the living, hearing songs from the second floor all the while we sit on a bench reflecting on existence.