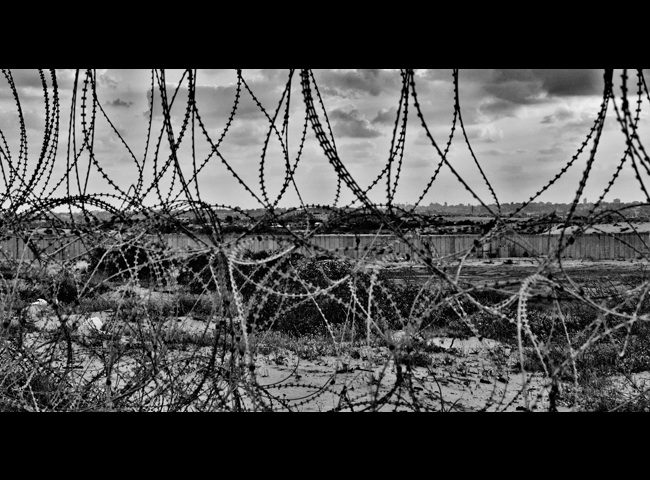 My, my, my…another strong arthouse film this year. And another one which is too good to be written about, if I’m honest. There are films which cannot be described in words. Sebastian Mez’s Postcards from the Verge (2017) is one of those films, a film that, like postcards, takes you on a journey into a different land. That land or these lands, to be correct, are Israel and Palestine.

The film starts with a black screen and no sound. After a while, the image of a fire burning in the far background of the black frame shapes up. The camera remains with the fire, lingering on it, focuses on it. This very first shot gives us an idea, a feeling, of what the next seventy odd minutes will be like: they will invite us to observe, to be in the very moments the director proposes to be in.

Mez’s film consists of chapters. Each chapter has a very specific aesthetic, especially visually. The first chapter stunned me because it felt as though I was looking at something through a third eye. The frame was structured in such a way that it gave the impression of an eye through which you observed, in wide angle shots, the landscape of Israel and Palestine. The director uses a stark black-and-white contrast for most of his frames, a contrast that is, for someone who loves black-and-white photography as much as I do, a real pleasure to look at. It’s the sort of visual aesthetic that makes my heart jump.

For a very long time in the film, there is nothing but images. Mez shows us the landscape of conflict, a conflict that has been ongoing for several decades, and which seems to find no end. There is one frame that struck me. It was a landscape shot, a slow pan, if I remember correctly, but perhaps my memory tricks me. What is important is that there is a tank in that landscape and because of the director’s use of high contrast black-and-white, you don’t see it at first. To me, this is a very good depiction of this conflict. Violence, and everything that embodies it, has become part of the fabric of those countries. Wherever you go, there is military; in the streets, at checkpoints, etc It has become normal, and no one sees it anymore. Just like you might not see the tank in that very frame because it is no longer standing out in a region that is in constant upheaval.

At some point a voice over comes in. The voice over disrupts the contemplative nature of the images and comments on the conflict. But it’s not going into details. It’s a simple observation: “I think peace will be difficult to find because we want the same thing. The Jews want Al Aqsa to destroy it and build their own temple on it, and the Arabs want Al Aqsa to pray.” The viewer is left with this thought, an idea that seems viable but that goes beyond the complex political circumstances that we have come to know. It is an observation from the inside, with a take on the conflict that goes beyond the violence that saturates our thinking.

Mez lets us alone with this thought, and continues his visual journey through the landscape of conflict – in a letter boxed super-wide angle (does that even exist?), for example. The effect of this is interesting. The wide angle allows us to breathe. We can easily shift around our gaze on a horizontal axis. At the same time, however, the letter box around the image contracts it. It limits our gaze on a vertical axis. And the (metaphorical) vertical axis is the one of feeling and experience (if we think back to Maya Deren’s thoughts on the subject). A contracted vertical axis in a film about a conflict where feelings are numbed…

Which brings me to the film’s fourth chapter, titled Vivid Memories. Overall, the film is like a photo album, and this becomes most evident in Vivid Memories. The frames are almost still images. Or perhaps they are still images. Or maybe Mez uses super slow-motion. In any case, these images are an embodiment of remembering, of vivid memories, just as the title of the film’s chapter proposes. The frames felt like memories. They reminded me of parts of Chris Marker’s La Jetee

. There is something tangible in those images, often dreamlike, blurry at first, then becoming clearer with time.

With Postcard from the Verge, Mez has created lasting images, postcards that stay with you. The final chapter of the film speaks about silence. In fact, it doesn’t. This chapter is quiet, almost completely silent…