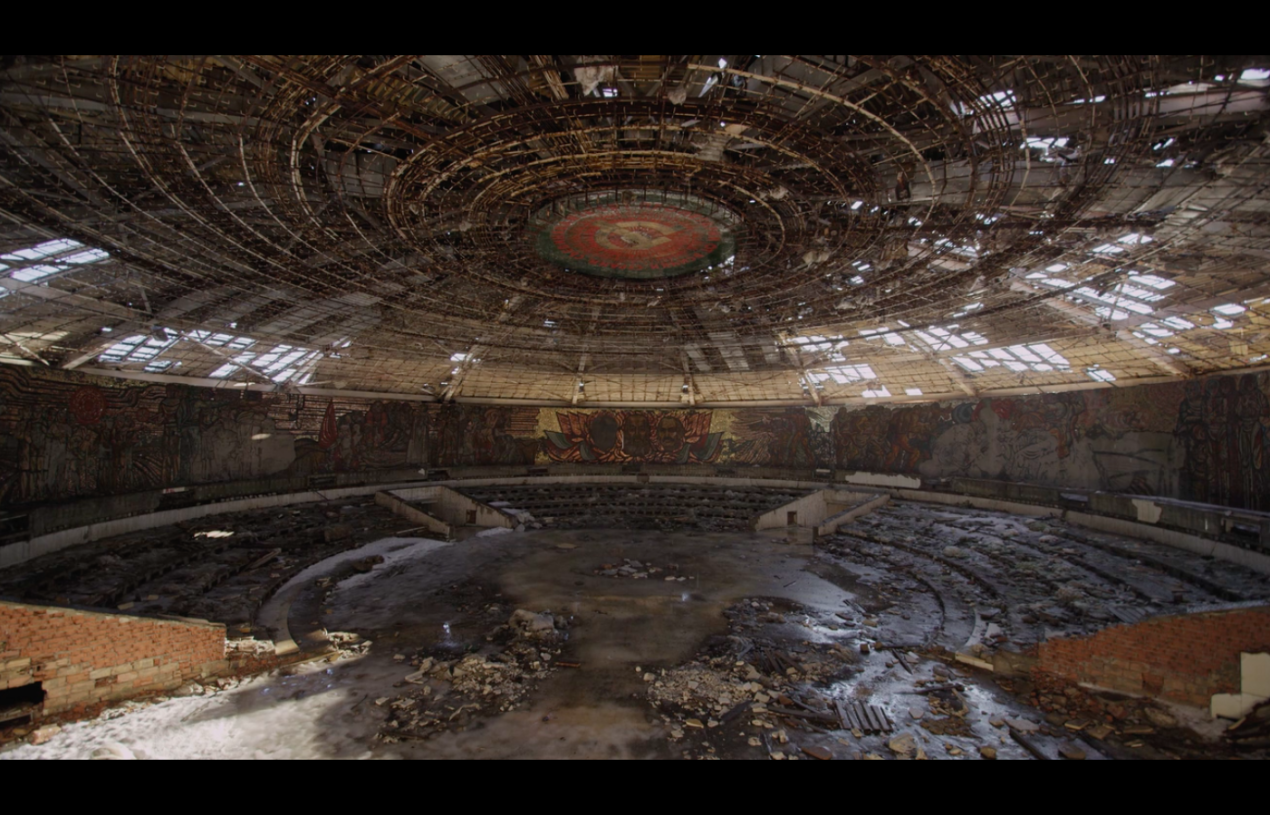 Who, or maybe what, is Homo Sapiens? Wise man, they say. But is Homo Sapiens just that? Does Homo Sapiens stand entirely for the human being we are? I’m not so sure. And I think Nikolas Geyrhalter’s superb poetic piece Homo Sapiens is, in effect, posing this question without giving answers.

Geyrhalter does not focus on the living aspects of Homo Sapiens, but of what Homo Sapiens has left behind. His film is about abandoned places, empty places, spaces where nature takes over as if man has never been there. Man exists as a spectre. He is in the buildings Geyrhalter films, the buildings which are not far from collapsing, from falling into pieces. He is in the abandoned playgrounds, in the abandoned train stations. He hovers like a ghost over every single image of Homo Sapiens. You can feel him, but you will never go beyond this feeling.

What takes over instead is a beautiful, intriguing soundscape. I closed my eyes from time to time to listen to the sounds. I could never tell where I was, but did that really matter? The sounds took me into an eerie, unnatural world, which at times reminded me of Tarkovsky’s Stalker

, reinforced once I opened my eyes again and saw abandoned buildings. It felt like being in a zone, in Tarkovsky’s zona, where life and death exists in the same image.

The images might be static. They might show nothing interesting. What is interesting instead is what is going on in your mind. We’re speaking of yes boredom here. If you’re willing to take on a film of 90 minutes which shows nothing but run-down buildings, you begin to create your own narrative. What games did the children play in that playground overgrown with grass? What film did they show in that decayed filmhouse? How many people used to come every night for their evening entertainment? Who was the person who left his or her bike under a shed at that abandoned train station in Japan?

Why did the people leave in the first place? I started to wonder why the places I saw had been abandoned. I began to think of Fukushima. I began to think of war. I had all kinds of things in my head. In fact, my mind felt very different from what the images showed. My mind was busy making up fictional stories about what happened at the places I saw. I made up fictional stories about the people who shaped those places. Who were they? And, more importantly, when were they there?

Geyrhalter’s Homo Sapiens is full of fascinating shots. Almost every frame is a beauty in itself. It’s incredible how much beauty you can find in destruction and abandonment. Homo Sapiens achieves this through perfect framing. This reminds me again of something I have read somewhere (God knows where!) and which applies so well to slow films: it doesn’t matter what you show. It’s a question of how you show it. You can show the most simple things, but they can become complex and special depending on how you show them. This is the case with Geyrhalter’s film.

I suppose many people would just walk past those abandoned places, but he makes us stop for a moment. He makes us look at them, and he gives us time to appreciate what we see. Wee see the past, the present and the future. We see what we built. We see what is now decaying. And we see how the planet will look like after Homo Sapiens is gone. Regardless of what we’re building right now, nature will take over. It is nature that is wise. It is patiently waiting for its time, for its time to breathe and for its time to expand.