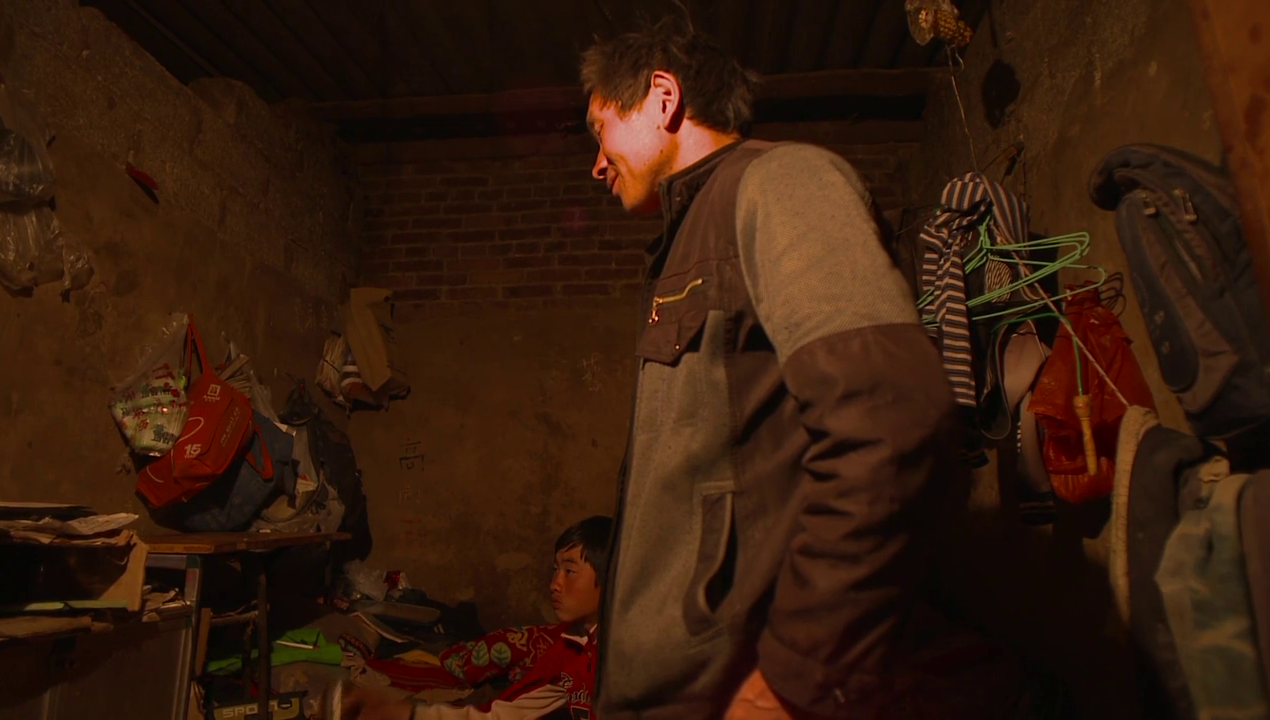 Over several years, Wang Bing has built up a library of films about migration. We tend to understand migration as a movement of people. It is, in a broad sense, a movement, a change as a result of economical, political or other developments. Migration results from hope or from despair, from desire or from fear. There are the Ta’ang, whose plight, whose migration, is put onto the large screen in Ta’ang. There is Bitter Money, Wang Bing’s film about young Chinese, not yet old enough to legally work, who migrate to the city because they dream of making enough money to lead a better life than what their families lead in the countryside. There is Three Sisters, three girls almost left to their own devices in the mountains of Yunnan as the father works in the city. With the exception of Mrs Fang and Fengming, Wang Bing’s films are always moving. They are about ongoing movements of people, ongoing changes in society, which, in turn, lead to the movements of people. Migration, movement – this is at the heart of the Chinese filmmaker’s work.

In his 2014 commissioned piece Father and Sons, there is also a push and pull between migration and stillness, between movement and stasis. For those who are familiar with the early canon of Slow Cinema, the film Mother and Son by Aleksander Sokurov might come to mind. It did for me before I saw Wang Bing’s film. In Sokurov’s film, a son is caring lovingly for his dying mother. The film, shot with special lenses which gave it a deformed, dreamy look, is about this close relationship between two human beings. It is about the love of a son for his mother. Wang Bing’s portrayal of two teenage boys and their father would be the opposite extreme of Sokurov’s film. It feels like the father and his sons live in two different worlds.

What’s striking is the father figure in particular. For almost one-and-a-half hours, Cai, a factory worker in the Yunnan Province, is absent. He moved to the city in 2004 to find work. Only several years later, he brought his two sons with him. Now, all three live in a small room (I would not even call it a flat) with a single bed. Wang Bing’s camera is positioned at the entrance of the room and films in a straight medium long shot what happens in front of it. And what does happen doesn’t seem like a lot, but it speaks volumes about the relationship between the father and his sons and the life of Chinese migrant labourers, which the director has picked up as a subject time and again in his films.

There is a paradox throughout the film. Even though Wang Bing titled the film Father and Sons, it is actually only one son which we observe for most of the time. We are introduced to the father and the brother only in passing. Their role is being absent and it is through their absence that they (especially the father, though) become important. Very much like Three Sisters, Father and Sons is a film about children who grow up without their parents. And if you put the two films next to each other it becomes apparent that staying behind in the village while the parents work in the city, or joining them in the city makes little difference. The children of migrant workers are alone, regardless of where they live.

This means that they have to create their own world, their own life. They need to create connections and in many cases this happens through mobile phones, through televisions. I remember Eduardo Williams’ The Human Surge, which I wrote about for photogénie. There was a degree of boredom apparent in Williams’ film that I hadn’t come across before. The Human Surge isn’t so much a slow film, but it is a film about boredom, and the way in which youngsters use technology to kill time. Because what else is there to do? What else can they do in a society, in a world that doesn’t give them future prospects, that doesn’t give them hope but rather numbness?

In Wang Bing’s film, too, this obsession with technology to kill time takes centre stage. One of Cai’s son, whom we see alone, sitting or almost laying in bed most of time, playing with his mobile phone. The television is always on, which creates a stressful soundscape for something that could otherwise be very silent. But this is the point: Cai’s son drowns out the silence by filling it with as much noise as possible. Silence is dangerous. Silence can deafen, silence can make us hyperaware of our surrounding. Silence can make us think and ponder. Cai’s son keeps himself busy with his phone. In regular intervals, he receives text messages. Then they stop coming, and there is only the television left.

Especially when I think about the television, located somewhere on the left hand side of the frame, I have the feeling that the film is quite literally a sound film. I said above that the television as well as the mobile phone help to drown out the silence, and, indeed, Cai’s son achieves this for himself, but also for us. There is a different life, there, beyond the television screen. There is life, there is a connection between humans, there are people who talk. Perhaps, there is a father who is with his sons more often, a father who has time to be with his family. Perhaps, there is a family who lives in a larger flat. But regardless, everything seems so far away.

The phone, the television – they allow a connection to a different world. They’re an escape from the harsh reality that is that of the family of a migrant worker. It is the reality of millions of people, not only in China, but around the world. It is perhaps not so much about the workers themselves, but about what it means when they are not there. It is about those who are left behind. It is about the “collateral damage” at home, about the damage in family structures, the damage in loved one’s hearts. But as is the case with all of Wang Bing’s films, Father and Sons doesn’t offer a solution to the problem. Wang Bing observes reality, he observes what is. What could be is clear, not the way we get there, though.

Instead, Father and Sons adds to a growing (and already rather large) filmography about migration by the Chinese director. It is unlikely that we will see less in future. Migration, in whatever form and for whatever reason, will be the defining characteristic of this century, a century in which we see the massive consequences of our self-made anthropocene. Documentaries such as Father and Sons will be the visual manifestations of what we have done to ourselves. And it would not be an exaggeration to say that Wang Bing seems to be one of the most prolific directors of the (human) effects of the anthropocene.