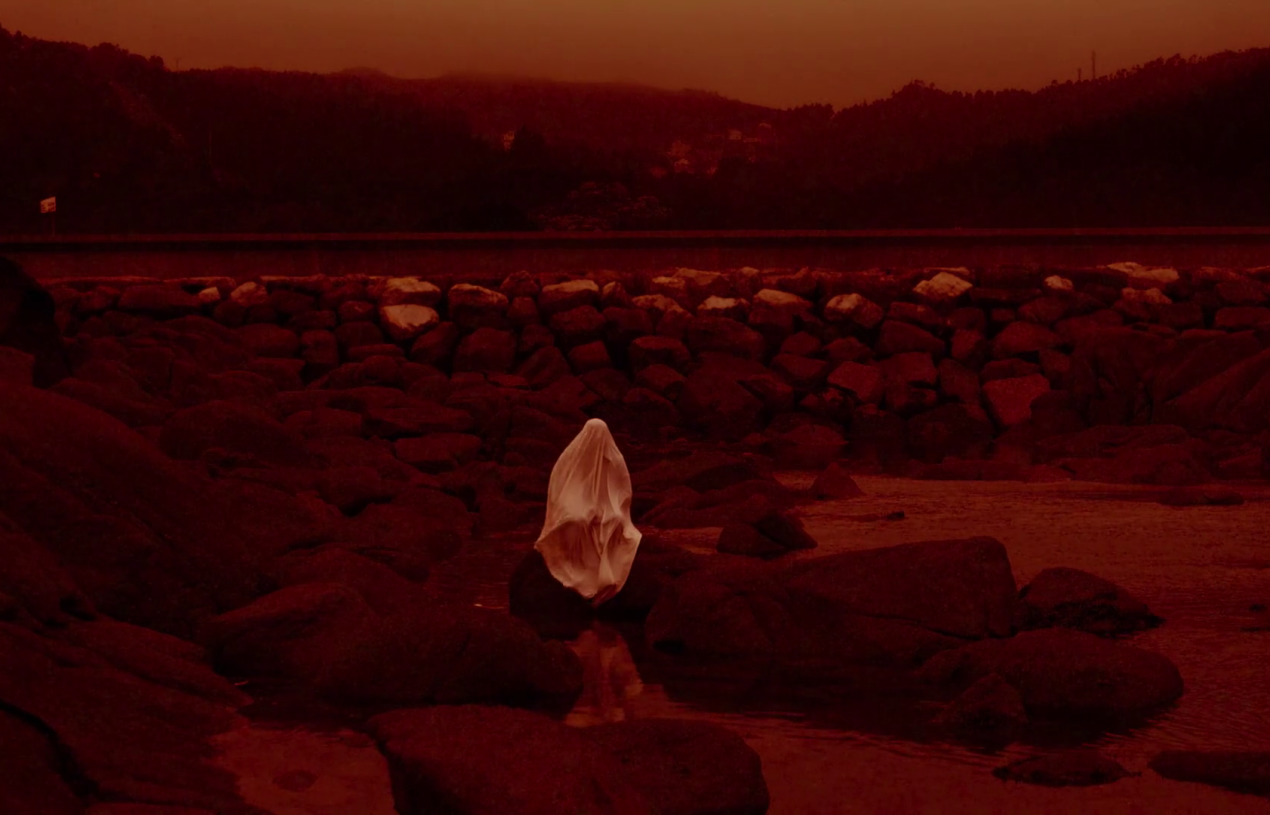 The moon is a monster, it devours time.

Rubio. A fisherman. He loved the sea, he loved the freedom when heading out with his boat. But the sea — nature — has its own thoughts, its own desires. Its own myths, too. There are monsters, stories of sea monsters that have been cultivated over centuries, especially in small villages. People need those stories, they need something to hold on to, something to explain a tragic loss, a strange occurrence. The inexplicable is unbearable, so we create stories, myths, to lift the pain.

What happened to Rubio that day, on that fateful day which ended in a shipwreck? Where is his body? There is a search at the heart of Lois Patino’s Red Moon Tide, a search for an answer, the search for Rubio. And as he had already done in Costa da morte several years ago, in this film, too, Patino focuses on what is left: a stoppage of time, a dying village, a focus on the impossibility of continuing to live.

Each scene, each frame feels like a mind image, like something from the unconscious. It’s eerie, ghostly, mystic. And very slow. The degree of contemplation, which Patino allows the viewer, is special and a challenge. It is close to what I’m currently experiencing with my sequence of shamanic journeys. It’s not so much a journey, but a collection of tableaus that demand to be contemplated and seen. Really seen, taken in, thought about (and of), reflected upon.

The world is at a halt in Red Moon Tide. Time has stopped. The people, it seems, have stopped living. Movement is life. Yet, there is no movement, no life, in Patino’s film. Except for sporadic movements, slightly, almost imperceptible, just as Tarkovsky (and later André Gil Mata) did, nothing tells us that what we see is alive, is breathing and feeling. The voices we hear come from the off. No one we see is speaking. It is thoughts we hear, not words. We hear grievances, we hear pain. We hear fear.

But words are uttered in another sphere entirely. They are removed from people and become ghostly entities floating around in the atmosphere, haunting and forceful.

The moon is the monster’s master.

There is a newly built dam. One of many megalomanic structures made of concrete to tame nature, to make it more profitable, more predictable. But it disrupts, poisons, kills. Are the dead fish we see a result of the dam, a result of their being cut off vital parts of their habitat? What is happening to the shore that is so beautiful, so fragile?

The golden rule of life. The size of our megalomania has no impact on this. Patino shows the massive dam several times, but it looks so abstract, so otherworldly, that it looks like an element from a science-fiction film, or like a huge Soviet monument from times past. The people Patino films in its surrounding are dwarfed. They look like small dolls and, indeed, everything but alive.

I couldn’t help feeling the soul of Tarkovsky in several scenes. I had to think of Mirror, in particular. I also had to think of Pedro Costa’s depiction of loss, grief and trauma. Those filmmakers are there, in each frame, almost guiding the image as if this was their own film. But they are merely observing, just as we do. Observing the moon, how it slowly turns red and taints the landscape it shines upon.

A red moon is always considered a blood moon. And this is the striking part for me. Blood is often associated with death, or something dying. Thinking of blood is usually thought of in the context of “losing blood”. But for us humans, blood is what brings us to life in the first place. It carries oxygen, nutrients, it is a vital transport route for everything necessary. Blood is life.

So, when Patino’s film turns red, it comes to life. The ghosts, with white sheets over their heads, remain. But there is movement. There is the movement of Rubio, who awakens and makes his way to the dam. There is the forceful stream of water emerging from it, the blood enabling the water to give life to a film that showed death like only very few films manage to.

That the film comes to life feels like an explosion of feelings, of suppressed energy and muted emotions. It’s an emotional contrast to the rest of the film, a liberation of the soul that has been kept in suspense for over an hour. What Red Moon Tide proves is Lois Patino’s incredible talent as an artist. I have a feeling that he isn’t at his peak yet, but that, instead, there will be a lot more and even more profound films coming in the future.

Red Moon Tide is a promise.