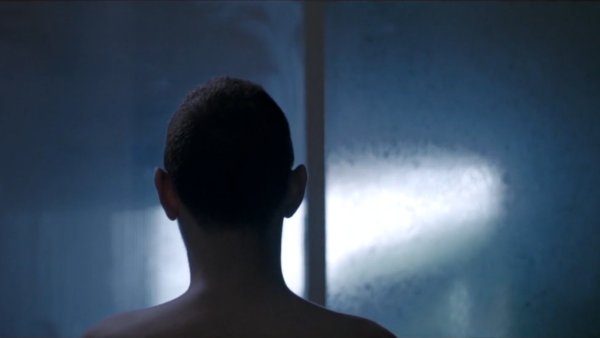 What remains if a relationship, if love, has hit a dead end? We have all been at this point, asking ourselves whether we’re still moving forwards together, as a couple, or if we have long reached a stage when it is almost impossible to return to the good old days.

With patience and an eye for detail (in a couple’s routine life), Yotam Ben-David from Israel explores this painful stage, often ignored out of fear to face the reality and the frightening possibility of being alone again. Itamar and Thomas, the protagonists of Remains, couldn’t be more different from one another. Whether it was a coincidence or not, the respective size/height of each character says a lot about how they are positioned in their relationship. Thomas is a tall, almost overpowering man. He is forceful and patronising. Ben-David doesn’t show this with the help of low angles, which would establish Thomas’ overpowering nature clearly on a visual level. Instead, the director asks us to read the character through his actions. This might take longer, but it is a way to get the viewer engaged without feeding them with a golden spoon.

Itamar, played by the director himself, is the complete opposite. It seems as if he is with his back against the wall, not having enough breathing space, being unable to move, to live. Regardless of what he does, it is wrong. The relationship is no longer an intimate community of love, but a sort of boxing ring where battles take place on a daily basis. Night appears to be the only relief for both sides, until another day, another battle, begins.

Ben-David uses beautiful night shots in order to underline the idea of a period of peace. But you can’t ignore the fact that the director’s characters are shown primarily alone in those night shots, suggesting that peace can only exist if the two partners are embalmed by solitude. It is uncomfortable to watch the two men positioning themselves in strong opposition to one another. There is persistent tension between the two, which acts as a thread which leads us through the film’s narrative.

All of this is, of course, the mere surface of the film. I had watched the film twice or three times, before I realised that the film has a deeper meaning. There was something that went beyond the depiction of a relationship that has hit a dead end. In fact, Ben-David said in an interview with tao films:

All of my films have roots in my own reality and my own experience, but at the same time I try to distil and highlight certain elements from this experience in order to examine them closely through my films. In this case I was very interested in this type of role play between dominant and submissive, which is something I believe we all live to a certain degree (even if not in the same volume as in the film). I was specifically interested in the different shades and nuances between those two poles, finding power in passivity and weakness in control. I was also interested in the idea that power is both attracting and destructive.

Remains uses its characters in order to explore the concept of power. This goes beyond the on-screen relationship between two men. Quite interestingly, it has a political edge to it. The idea of an attractive personality which you follow and engage with only to find out that once you’re in this relationship (any type of relationship, it doesn’t have to be a loving relationship) you are oppressed to a point where you are aware of what’s happening without being able to stop – this rings so true in current politics where the right is on the rise around the world. Or when even left politicians turn out to use their power to, quite literally, overpower.

This political aspect of Ben-David’s Remains might not be very obvious. The young director is very clever in hiding the obvious, asking us to search for something that is just as important as the surface that plays out on screen. The short is a subtle investigation into human relationships and the power that plays out between them. Could we go as far as saying that the power Ben-David depicts mirrors societies, too, confronting one another because of their differences? Watch the film on our platform and see for yourself.