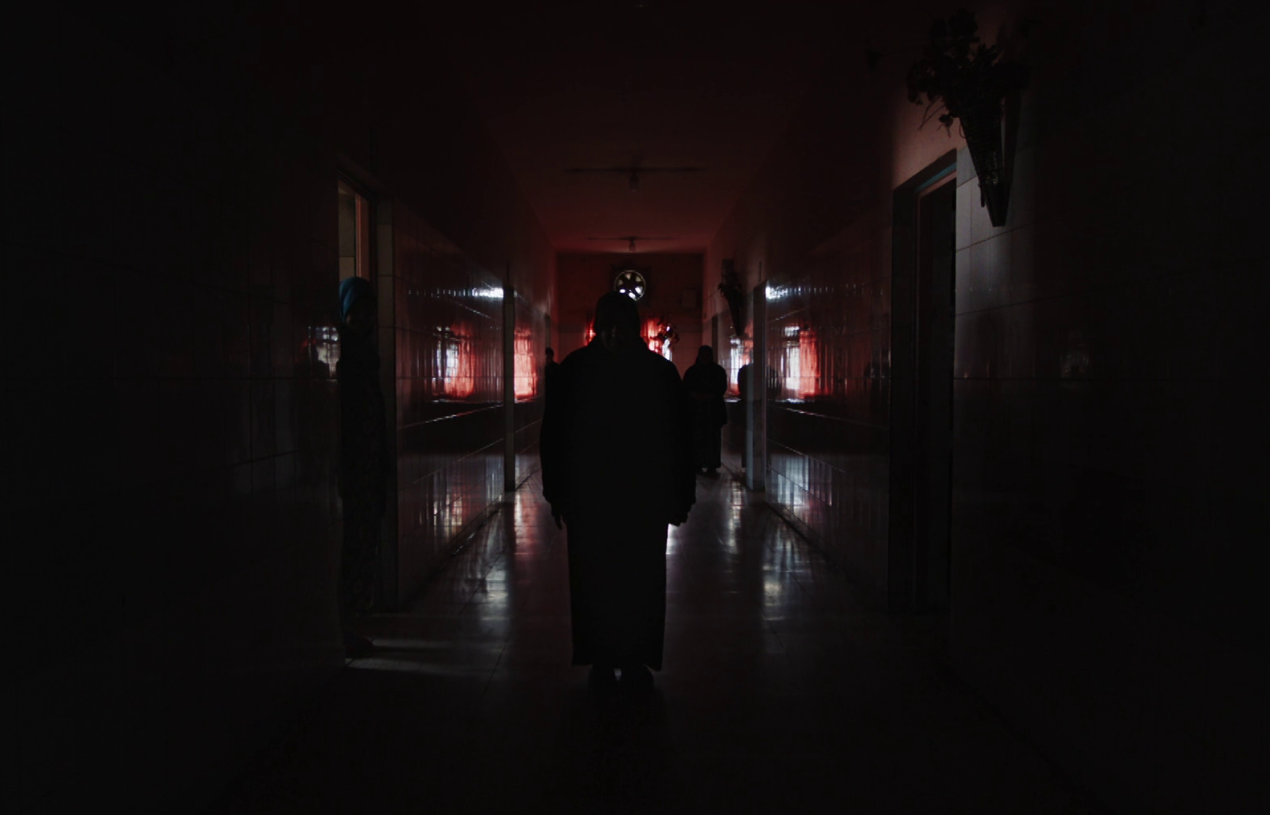 After the end credits of Gianfranco Rosi’s new film Notturno appeared on the screen, the blog post I had mentally written throughout the duration of the film blew into pieces. The post disintegrated about an hour into the film when I saw children trying to cope with the horrors they had seen by drawing their memories and feelings. It disintegrated when a young boy, stuttering, said that the picture he drew shows the time “when ISIS started exterminating us.” It disintegrated when another child, a girl, says: “The night scares me so much”, before yet another one, another girl, says that she witnessed children being tortured. The boy tells us later that he saw how ISIS members chopped people’s heads off.

An entire wall in a classroom covered with pictures drawn by heavily traumatised children.

As a result of the ongoing Syrian war doctors and psychologists felt the need to reconsider the medical definition of post-traumatic stress disorder (PTSD) because it just didn’t cover the psychological distress that especially children went through once they were in a comparatively safe place and could begin to decompress. PTSD is a devastating diagnosis, I know it myself. It’s a psychological burden that forces you into a self-destructive mode until you finally seek help. Not everyone does, or can, or want to. The Human Devastation Syndrome has been described as PTSD on steroids. It is a form of distress and collapse that goes beyond everything that psychologists and doctors have seen and studied so far. And, unless I remember it wrong, it is beyond repair. Those who suffer from it, cannot be helped to the same extent as patients with PTSD. The Human Devastation Syndrome is a term to say that the person has died on the inside and that it is alive only as a shell. There’s nothing left.

This is what is haunting me while writing this post. I read about the syndrome five years ago. Today, it hit home.

Gianfranco Rosi’s Notturno looks at life at the borders of Iraq, Kurdistan, Syria, and Lebanon. It’s a quiet film and even though the camera feels detached from what it records, Notturno is an intimate film. The film is bracketed by two mothers who lost their children. At the beginning of the film, we can see a mother in a rundown building, possibly a former prison. Ruins are what remains. And traces of blood on the wall. It was here, in this very room we are in right now, that the mother’s son was tortured and killed.

If I touch the wall, I feel your presence.

The blood on the wall, this trace, is the only thing left of her son. Two photographs she holds up to the camera show the body of her son, badly beaten and, eventually, strangled.

At the end of the film, a mother, in tears, sits in the dark with her mobile phone. Here, too, we look at (or listen to) traces. Traces her daughter left on WhatsApp. Audio messages with an audible fear in her voice. She says that she was in Syria now. She wanted to send photos, but she was scared that the ISIS men would find them. She told her mother that she would delete all messages from her phone. Her mother shouldn’t worry. This was the last message.

Thos two scenes function as a bracket which holds the film together. Inside this bracket, there are scenes of a couple smoking shisha at night, of patients in a psychiatric ward preparing a small theatre play and scenes of a mother looking after her seven children. There are scenes of a women-only fighter group in a military compound and of a family arriving at a refugee camp.

Rosi begins the film with an inter-title. A reminder that the instability in the Middle East has several reasons, one of them being Western powers carving up the region with only their own interest in mind. I couldn’t help but think of a book which I saw in a bookshop here. The French title would probably be translated as “a line drawn in the sand”. After the end of the Ottoman Empire and the First World War, Western powers carved up the Middle East with no coherency in sight. If one looks at the decisions from 100 years ago, it is clear that those countries, which were created in the aftermath of the First World War, were based on nothing but an arbitrary line in the sand. The aftermath of those decisions reverberate today.

The empty look of a teenage boy, who helps a man shoot birds for $5 a day, speaks volumes. He goes about his daily life but there is so much emptiness inside him that it becomes palpable in Rosi’s film. The patients in the psychiatric ward (reminders of Wang Bing’s ’Til Madness Do Us Part, albeit set in a different context) add to the overall portrait of devastation: of regions, of countries, of cities, of houses, of people, of human connections.