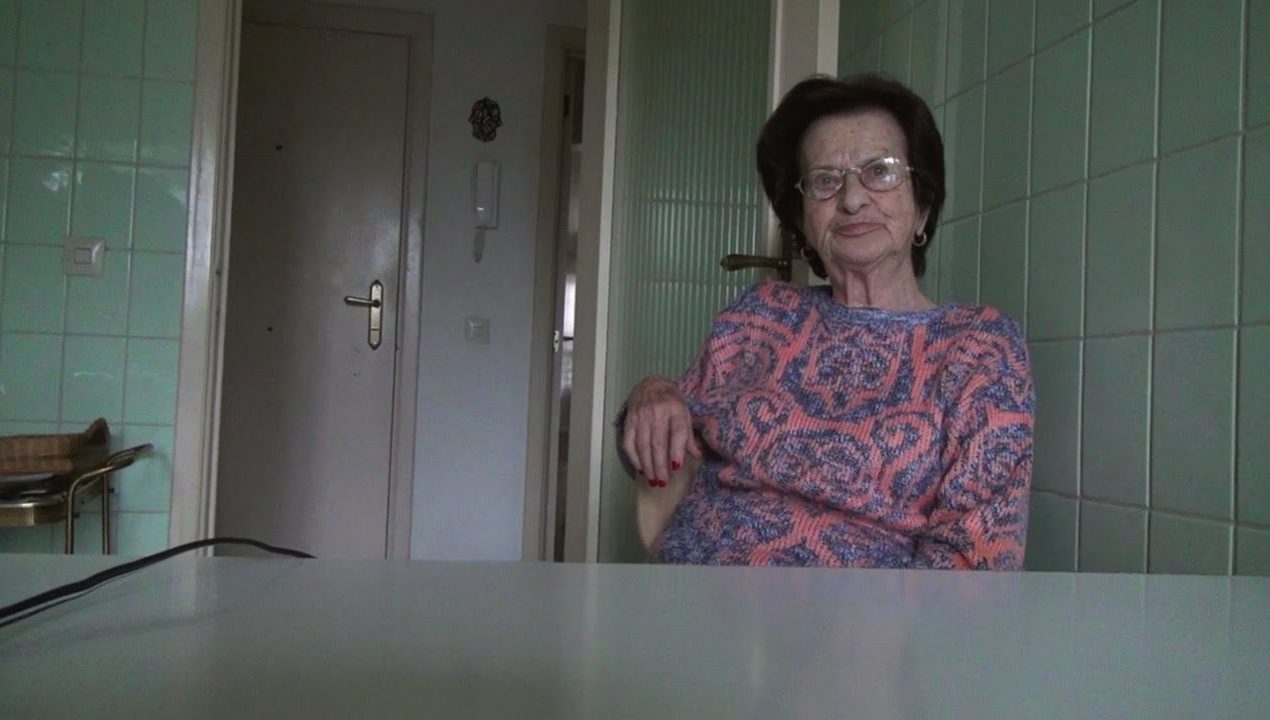 My journey through Chantal Akerman’s filmography continues. It is haunting to do this with the knowledge that she committed suicide almost to the day two years ago. I mentioned in my post on Là bas that her pain, her struggle, the weight of the past she had carried with her, was palpable in every frame. Chantal Akerman was open about this, and yet she wasn’t. She made it more (c)overt in her films, I find, than in other circumstances. The texts she wrote were full of references to her mental struggles, and yet it is her films that haunt me most. Akerman is similar to, albeit also very different from, Lav Diaz. The Filipino director equally creates a traumatic universe in this films and plays with presence and absence throughout his long films. Even though I know about Diaz’s own traumatic past, his films are less personal than Akerman’s. Whereas Diaz primarily tells the story of his country, Akerman tells her own story. She speaks about her family and the ways in which her family’s contact with the Holocaust has shaped her.

No Home Movie is Akerman’s last film. It is an intimate study of her mother, of herself, and of the relationship between the two. There have been rumours that people booed at the premiere of the film. I do not and cannot know whether those rumours are true. But if they are, they show that some people have little interest in building a relationship with a director and a film. A director is merely a machine creating one entertaining film after another. Film becomes a commodity. No Home Movie is anything but. It is not exactly beautifully shot, it is raw, unpolished. It is a home movie, without actually being one. Some of you might remember old footage of your holidays, when you were little. Our parents or grandparents show us those raw pictures, often utterly unstable which makes it difficult to watch. In the good old times of analogue film, the shaky nature of the home movie image was a classic. The shakiness often became an aesthetic vehicle in order to transmit feelings of joy. Who hasn’t seen those images of children running towards the sea with their arms high up in the air? Or of parents playing hide-and-seek with their children, a smile on their faces, enjoying the leisure, the freedom, the opportunity of being, if only for a little while, a child again.

Akerman’s No Home Movie is the opposite of all that. It shows stasis, it shows one woman ageing slowly and another trying to cope with it. The camera is often positioned on a stable surface, such as a table, recording passively what happens in front of its lens. At times we see Akerman herself or her mother in a long shot, framed with the help of door frames, which represent the mother’s apartment in Brussels as a complex labyrinth. The detached camera is a good metaphor of the distance that lies between present life and past trauma. Post trauma, you continue your life, but your life is different from that of people around you. Yours will always be a different life. I remember those painful passages in Akerman’s writing in which she evoked the silence, the detachment, especially of her mother, as a result of the family’s deportation to Auschwitz. I remember those passages in which she spoke about her dad taking her out of Jewish school, of the family ceasing to celebrate Shabbat. They seem to me like consequences of endured trauma and describe the detachment that Akerman’s camera often visually reinforces. These memories surface in No Home Movie, during long sequences of conversations between Akerman and her mother. They are a repetition of her writing.

The film is not, as it might look at first, a film about her mother. It is more complex than that. Akerman herself is present in a lot of frames. The conversations with her mother in the kitchen, over a meal, are interesting, are simple and yet have a strong meaning, because they return over and over again to the past. It is a past that has marked Akerman’s mother profoundly, and Akerman herself, although she was not directly affected by the persecution of Jews. Instead, she is the second generation that is known to have “inherited” the trauma of their parents. Theirs is a trauma that is the result of silence on the one hand, but also of overt behaviour of their parents as a result of what they have been through. These traumas can affect three generations, although the third generation (as is the case with myself) approaches this trauma from a different angle. Something that struck me is how relatively open those conversations between Akerman and her mother were in the film, knowing that there had been a difficult silence in the past. What the film shows is something I see in my own family; the older my grandfather get, the more he speaks about his trauma. It is as if they want to unburden themselves in order to be able to rest in peace, literally and truly.

No Home Movie contains, I find, a radical break after an hour. The first part of the film is a study of Akermans’ interactions with one another. They’re almost sweet, those scenes when Akerman films her mother while being on Skype with her. When her mother asks why she is being filmed, the director responds so lovingly, heartfelt: “I like filming people, but you more than anyone else.” Or “Because I want to show people that there is no more distance.” It is affectionate, a gesture that seems so personal, and yet it is there for all of us to see. The second part is a shift towards showing the last days or weeks of Akerman’s mother. The film loses its dynamic (on the level of character interaction) and becomes a slow, almost static portrait of an old woman eating less and less; sleeping more and more; remembering less and less; being confused more and more. This intimacy has certain similarities to Wang Bing’s Locarno winner Mrs Fang, which I reviewed not so long ago. No Home Movie doesn’t go quiet as deep, but one cannot deny that these two films have in common their focus on the process of dying, of saying goodbye.

In Akerman’s film, this goodbye is twofold, which gives this film a ghostly appearance. The director had said that her films were about her mother and if her mother was to die, there was nothing left for her to say. With her mother’s death, her filmmaking had lost its raison d’être. It pained me to see the final shot of the film; alone, she closes the curtain in her mother’s apartment and remains in a dark room. It stands in stark contrast to what the film felt like at the beginning. There were scenes of her driving, perhaps aimlessly, through austere landscapes, leaving the sound unpolished. Akerman wasn’t present in those shots. She focuses instead on the vastness in front of her, of the emptiness, but also of the absolute freedom that a landscape such as this can offer. In the end, stasis and death prevail. Darkness becomes a veil and a shadow that, I find, wasn’t (visually) as present in the films I had watched previously. No Home Movie is no home movie. It is Akerman’s personal farewell; a farewell to her mother, to film, to the world. A striking last film whose images and conversations will stay with me for a long time.