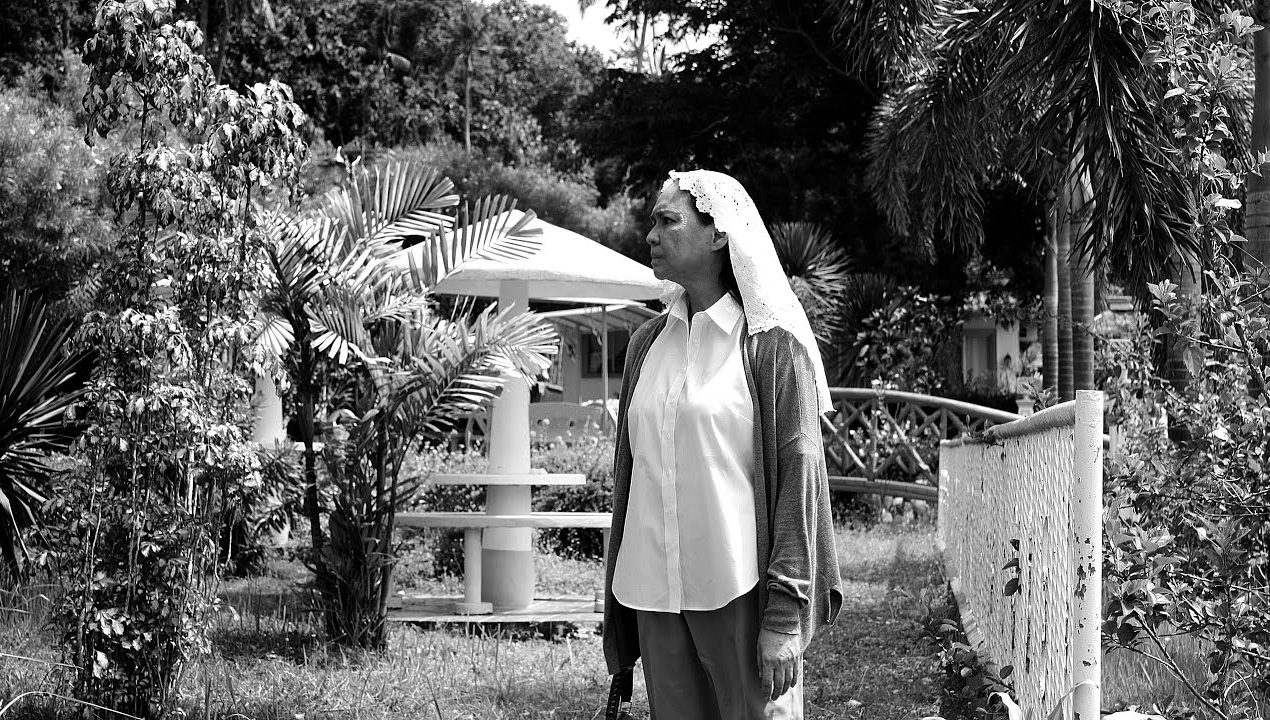 Hooray! I have finally managed to see Lav Diaz’s The Woman Who Left, which won the Venice International Film Festival about two years ago. I’m always a bit behind with those films now, as things have changed quite considerably since I finished my PhD thesis on the director. In any case, the main thing is that I still catch his films, albeit now with a delay of several years.

The Woman Who Left has been hyped quite a bit, similar to his other “short film” Norte, The End of History. It is a little under four hours long, and therefore comparatively accessible. I see more and more documentaries that last for hours and hours. It has become a thing now, and I quite like it. Especially for documentaries, time is essential. It’s about investigating, about exploring, and all of this takes time. In recent years, Diaz has reduced the running time of his films with the sole exception of his first Berlinale film Hele that was very much in line with his earlier films that have turned Diaz into a real challenger of traditional film spectatorship. The Woman is, I find, close to the story of Norte, and it made me wonder whether those two will, in the end, become part of a trilogy about crime and punishment, a theme that is very much at the heart of both films, a red thread, a line that the director walks us through over the course of the films’ running times.

Both films are about injustice, about the failure of the Philippine justice system, of arbitrary arrests and the subsequent destruction of a life. Of course, one of the major differences between Norte and The Woman is the use of colour in the former, and the use of black-and-white in the latter. The Woman is visually very interesting. From the beginning, there is a nice shift apparent in the way Diaz records his scenes. He uses a lot of light (if deliberately, I don’t know), which gives some of the scenes an interesting high contrast between light and shadow, while at the same time just shying away from actually overexposing the image. Also, Diaz continues his exploration of the night, which he does in pretty much all of his other films, and which has always struck me. A couple of months ago, I wrote another post on the use of the night, the use of darkness, and how it contributes to the “slow” experience of a film. The night in Diaz’s films always has something dangerous to it, as it does in real life in any case. Diaz makes sure not to use too much extra light. He shows the night as it is where he films: pitch black, dangerous, lurking, creepy at times. A time, a space where people hide, where people seek refuge, but also where people work.

The actual story of the film is quickly summed up: Horacio, falsely imprisoned for a murder she hadn’t committed, leaves prison and seeks revenge, wanting to kill the man who was behind her arrest and her trial. The film begins with scenes of Horacio in prison, teaching other inmates and children. 30 years – this is the time she had to spend behind bars for a murder that, in fact, a friend of hers committed, a friend who then framed her. 30 years – this is the time wasted, the time lost. Horacio didn’t see her children growing up. She sees her daughter when out of prison, but her son remains lost without a trace. Her husband died while she was in prison. 30 years – this is the time it took for her to lose everything she’s ever had. The obvious anger and thirst for revenge becomes one of the main themes, albeit Diaz stays away, as usual, from showing violence. The director focuses on the tension that is boiling underneath, the tension that is there, dormant and yet fully alive. It only needs a small kick in order to show itself.

Perhaps because of all the social work she had done in prison, Horacio (Renata in some scenes, depending on the person she is with) presents herself as the good person, as the helper, the sort of rock in a stormy sea. She’s drowning in thoughts of her own, but she’s nevertheless there for others. She helps her former caretaker to start a new life. She helps a homosexual after he had been raped and beaten. She gives money to a woman, who is clearly suffering from severe mental health issues, and also buys her food. But here it is: she does so in order to get closer to her enemy: Rodrigo Trinidad, her ex-boyfriend, who is responsible for her imprisonment. Horacio is a good woman, but she has also learned to be cunning, cold, and, above all, rational.

All of those elements – the mise-en-scène, the storyline, the aesthetics, the characters – make for a very good film. The Woman starts on a promising premise. Unfortunately, this is where the film remains: at its premise. As with Norte, The Woman is obviously hyped because it is an easy film. It is Diaz’s most accessible film. The storyline is easy to follow. There are no twists, no turns. The viewer knows what’s happening next. It’s a film that makes the viewer feel comfortable in his/her seat because there’s nothing lurking around the corner, nothing that can shock. Diaz favours a straight, linear storyline over a complex engagement with the actual subject the way we know it. What happens in the next scene is evident. What happens at the end is evident. The viewer doesn’t have to engage. S/he can sit back and have the film wash over him/her.

I found this quite stunning because I know Diaz’s stand towards popular cinema, but The Woman is very much in line with the concept of popular cinema. Minus the film length and the long takes, the way the story is constructed is spoon-feeding the audience, which he had always opposed. At the same time, I reckon that both Norte and The Woman are ways to make his work more popular, making it in turn more likely to receive financial support for his more arty projects. And going down this lane means, unfortunately, accepting a drop in quality of your own work. It is not just the easy storyline that made it difficult for me to watch this film. It is also the acting. Horacio, played by Charos Santos-Concio, was a difficult character to follow. Her acting wasn’t good, or rather it was what it was: it was acting. With the exception of the mentally handicapped woman and the homosexual, the actors weren’t very good. Contrary to actors in Diaz’s previous films, those characters weren’t living their roles. They did what they got paid for doing: acting. This has a detrimental effect on how the film is perceived, namely as a film, an artificial construct, not as an experience.

I have to say that, sadly, this was the most difficult film by Diaz to sit through. For me, personally, of course. I’m sure that other people think differently, and that’s perfectly fine. I have troubles seeing people try to fit into their roles, trying to be convincing actors and actresses for four hours. Trying to follow an easy storyline without falling asleep. Then I prefer eight hours of twists and turns, characters who don’t act but play themselves, and a storyline that doesn’t wash over me, but that keeps me engaged. I found eight hours Melancholia much easier than The Woman, because it kept me awake, it kept me engaged. The Woman is, as I said above, the easiest Lav Diaz film. That might be a good thing because people can discover his work. At the same time, he shouldn’t be judged on this film alone. He made superb films before. Difficult films, difficult to access, difficult to sit through. But if you really want to get to know Diaz, then you need to give those films a try after you have seen The Woman.