The suspended step of the stork – Theo Angelopoulos (1991) 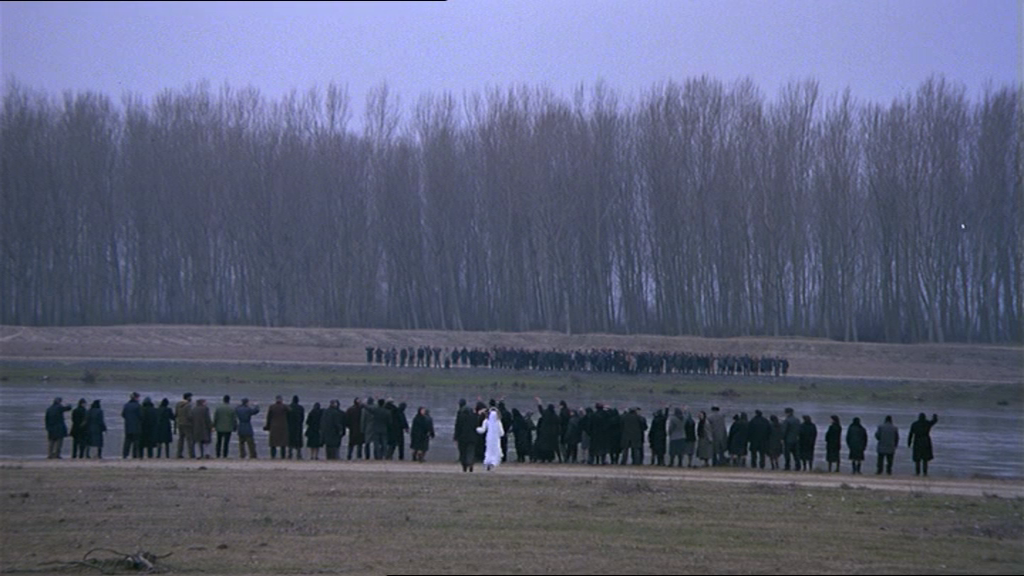 There is perhaps no better time for beginning to watch Theo Angelopoulos’ Border trilogy than now. On Saturday, we commemorated the 30th anniversary of the fall of the Berlin Wall, the visible, concrete border which divided not only Germany but Europe as a whole, disappeared over night. It was a joyful night, full of hope and optimism. Retrospectively, for me, it was an important day which would mark my future. I was a mere 22 months old and had no say in what happened. But I am now able to live in a Europe without borders, free and able to decide what I want to do next, where I would like to live and which people I am going to meet.

And yet, the hope and optimism that characterised so much the early post-RDA days has faded and the world is confronted with more walls than ever before. Societies close up once more, nations build walls along their geographical frontiers in order to defend their territory from invaders. Or so the populist rhetoric goes. The fall of the Berlin Wall wasn’t the end of walls, the end of segregation into “us” and “them”. It was the beginning of a much stronger surge of nationalist ideas and a real loss of humanity.

Theo Angelopoulos had perhaps a feeling of what was to come and define everything around us, beginning in 2015 with a large number of refugees arriving in Europe. The suspended step of the stork was released in 1991, just in time to take a look at borders and their effects on innocent people who become pawns in political games between nations. We are in Greece, at the border to Turkey. An army general stands on one leg at this very border, on a bridge. It is nothing but a blue line. In the background there are two Turkish soldiers, ready to use their arms if the general was to cross the line. “One more step, and I would be going elsewhere,” the general says. Borders are lethal, borders kill. Angelopoulos doesn’t need much time to formulate an essential argument that remains valid to this day.

There is talk of refugees, waiting, surviving in an abandoned part of a town close to the border. The town closest to the border. The town that has been called “the waiting room”. A non-place where refugees arrive from all over, where refugees wait for their papers, where they await the green light to go somewhere else. But they don’t get their papers, they don’t get to move away from this non-place where they live a shadowy, squalid existence. They house in abandoned train wagons, entire families stay put in the cold. There is a camera team filming their sad existence, the existence of ghosts that haunt a chosen town, chosen for its proximity to a border, for its strategic placing, the first place to go on their way to a better life.

The camera moves along the train waggons. There is something of Béla Tarr in this, the long travelling shots of people in misery, watching the camera, watching us, breaking the fourth wall in order to pierce us, in order to make us see their dire situation. But something else is going on. As a German, as a European, I cannot help feel uncomfortable seeing people herded together in trains, with a questioning look in their face, demanding reasons for their situation, demanding answers as to where the journey they are on will take them. They are no longer in control of their fate. By uprooting themselves and their families, they have given away their autonomy. They are now dependent on what the Greek authorities decide. They are now in a limbo which seems to have no end.

Angelopoulos’ main character, a man perhaps in his late thirties or early forties, is part of the camera team, which reports about the going-ons in town. When he sees one particular refugee he is convinced that he knows the man. A search begins, a search for a former politician who had disappeared several years earlier. His ex-wife has remarried since he left, life goes on. The search for a missing politician in the midst of a refugee crisis could easily happen today as well. More important, however, is that this search for a person is not so much for a human being. It is a search for humanity amidst a crisis of and between humans.

With its release date, the film fit well to the upheaval that shook Europe at the time. The Soviet Union collapsed two years after the Berlin Wall came down. Millions of people were suddenly stateless. They were no longer Soviets, but found themselves in newly formed countries which they had not belonged to before. Many people made their way across borders to reach a country which they would like to live in, which they would like to make their home. The suspended step of the stork is perhaps timeless, but not the way in which it was filmed. Today’s slow-film directors not so much create a narrative around a refugee crisis, as Angelopoulos did in 1991, but show it as it is in form of observational documentaries. One only needs to think of Wang Bing and his excellent Ta’ang. Refugees, migrants, those “in the waiting room” are now protagonists in films about them and their plight, which is an important step, but also says something about the development of Slow Cinema in the last thirty years (more of that in my book, et voilà that’s a cliffhanger for you!).