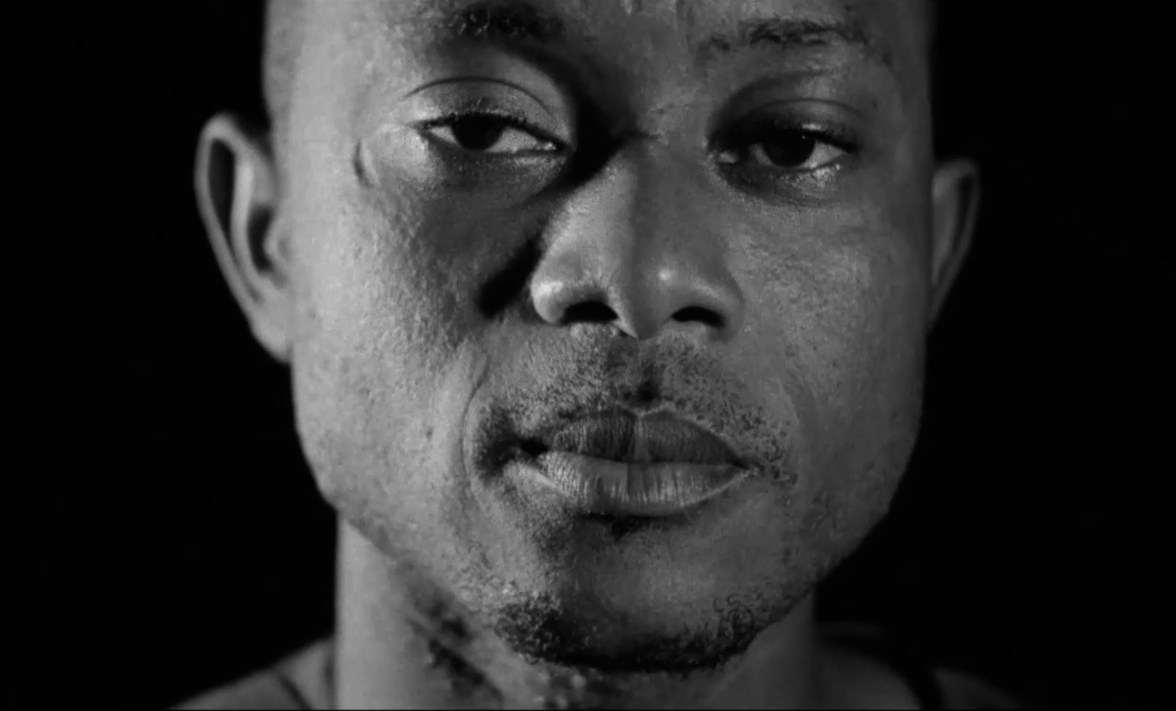 It’s been quite some time that I have been told to explore the films of Ben Russells. I think the very first recommendation dates back to 2012, when I have been asked to watch his Let each one go where he may (2009). I have never taken the time for this film, primarily because at the time it didn’t fit quite into what I had in mind for my PhD thesis. I am, however, very happy to have finally seen my first Ben Russell film, albeit many years later. Russell’s Good Luck (2017) is an impressive observation of mining in Serbia and Suriname, and is divided into two parts, which aesthetically differ from one another, but which, in the end, tell the same story.

The film begins with a long distance shot of trees, which slowly fades into a shot of what looks like a mine. The camera remains with this scene for a little while. Rather ominous music plays in the background. Music doesn’t function as an entertaining medium here. It rather reinforces what is to come. The camera retreats, very much in Béla Tarr style (with a pointer to Damnation), and it reveals that we were, in fact, standing inside old ruins, possibly those of a family house. The camera also reveals that the music we hear is played by seven men, a small orchestra, if you want. They leave the building (always followed by Russell’s camera), stand for a little while on the cliffside of the mining site, then walk down a street. The camera is always with them, slowly moving ahead of the seven man, almost steadily pulling them towards itself, until they stop their walk and their music for one man to tell us that he was born in that very city. He regrets that there’s nothing left of it but memories.

This is the introduction to Russell’s Good Luck, a title that might surprise at first, but whose meaning becomes very clear in the course of the film’s running-time of over two hours. After this quite impressive intro, the film switches from colour to black-and-white. A miner sits in front of a camera. He’s smoking, looking into the camera, looking behind the camera. This portrait is arresting. It not only stops the film’s steady progress for a moment, but it also arrests our eyes. It is almost like having a photograph, or a collection of photographs, inserted into a moving image presentation. After less than a minute, the miner gets up and turns off the camera. These portraits, which, to me, are iconic of this film and which seem to contain so much more information than Russell’s other shots, function as bookmarks, or even bookends. They function as definite stops, perhaps even as minor shock moments which disconnect us from the almost omnipresent movement in previous and following frames; the movement of the camera, of machines, of people.

It is those portraits that I found most fascinating, containing, as they do, so much information about each miner. In many instances, Good Luck might appear as an almost anonymous portrait of underground and illegal collective mining. In some cases, the director does interact with the workers, both in Serbia and in Suriname, asking them whey they work in a mine, or what they are afraid of. But overall, the film appears removed from the individual until a black-and-white portrait, beautifully shot in 16mm, reminds us that the story is about individuals. Those portraits allow us to study their eyes – where they go, where they stop, what they focus on; their facial features – do they smile? do they seem to be worried? do they play with the camera?; or their posture – are they imposing? are they strong? are they scared? We can study those people we often only see from the distance in detail and therefore get to know them. The workers, who risk their lives in mines in order to earn money for their children’s education, as one worker told the director, become individuals, familiar like you and me. Especially those men working in the underground mine in Serbia, who are, by the nature of their job, hidden from our eyes, are put into spotlight so that we can see those faces, faces of men who simply dream to earn enough money to leave the area.

The two parts of Good Luck almost function as mirror images. The film begins as described above, introduced also by information regarding the whereabouts of the underground mine in Serbia. The man, who speaks about his memories, sets off the first part of the film. The second part, set in Suriname, receives no such introduction. Instead, Russell continues in his usual filmmaking process until the very end, when one of the miners speaks about the existence of gold in the area and the fact that many people come to find it. He’s positioned exactly like the miner from Serbia, slightly to our right. Only at the end do we learn that this part was shot in Suriname. Structurally, these are mirror images, and yet the two parts are different in that they look, and therefore feel, miles apart from one another (which, truth be told, they are in any case – Europe and South America).

Good Luck begins with its exploration of mining in post-war Serbia. For most of the time, we are underground. A lift brings us and a group of workers in the dark underworld and leaves us there for over an hour. The soundscape is important, and Russell recorded a very clear soundtrack to help with our orientation process. And yet, I believe that unless you have been to a mine before or worked there yourself, it is not always immediately clear what is happening. The camera moves slowly, and until it has reached the source of the sounds, the viewer has to get engaged and imagine where the sound could come from. Some scenes, such as two workers drilling a hole into a rock, appear endless, slow but also creating a turmoil because it upsets our senses and the usual smooth duration of the frames that come before and after those explorations of work mechanics. But it’s not all about work. Russell also accompanies the men to their coffee and cigarette break, also in the dark, cut off from civilisation. Their posture, their behaviour – a lot reminded me of the lunch breaks I saw in Wang Bing’s West of the Tracks. There is very little that distinguishes the two, if put next to one another.

Almost everything that happens underground seems magical. Sometimes, we see only torch lights. Sometimes we only see silhouettes. Underground mining is ugly, and even though this film doesn’t fail at making this clear, its aesthetics also add some magic to the visuality of it all, a visuality that is for our eyes only. At one point, I was reminded of fireflies populating the mine. With the beginning of the second part, torches are replaced with bright sunlight at the northeastern coast of South America. We follow a man searching with a metal detector for possible gold stacks. In some ways, this is somewhat similar to what we have seen in the underground mines in Serbia; the jungle envelopes the young miner, there is only little light, until the film cuts and we follow a young man carrying a canister to a for us unknown destination. “No one likes working here”, one of the workers say, mirroring what miners thousands of miles further east have expressed earlier in the film.

And yet, we are in a different world. We’re told about traditions: if you enter a new part of the jungle and want to work it, you have to make an offering to the jungle. Never kill an animal you find while digging. If you spill blood, the jungle is asking for more blood and it’s not a good omen for the mining business. People here are mining for gold, hoping for a better future, for a good salary, for a better life. What this part makes very clear (and I have only noticed it towards the end of the film) is that Russell clearly paints a personal portrait. There are documentaries that focus on the work of machines, on their processes. Russell doesn’t remove the people from the process. On the contrary, he puts them into the centre of his work. We focus on the workers’ faces, their arms, their bodies, without ever fetishising them. The human takes centre stage in an otherwise inhumane work that risks the life of those people. And with that, the title comes attached with a variety of meanings. Good luck surviving underground? Good luck finding gold? Good luck improving your living standard? Good luck earning enough money to fund your kids’ education? Good luck going through this without having an accident?

A lot is there for us to think about. A lot is there to see, and Good Luck is definitely a must-see this year. I was fortunate enough that Franco-German TV channel ARTE showed it the other day. Big thanks to the ARTE team!