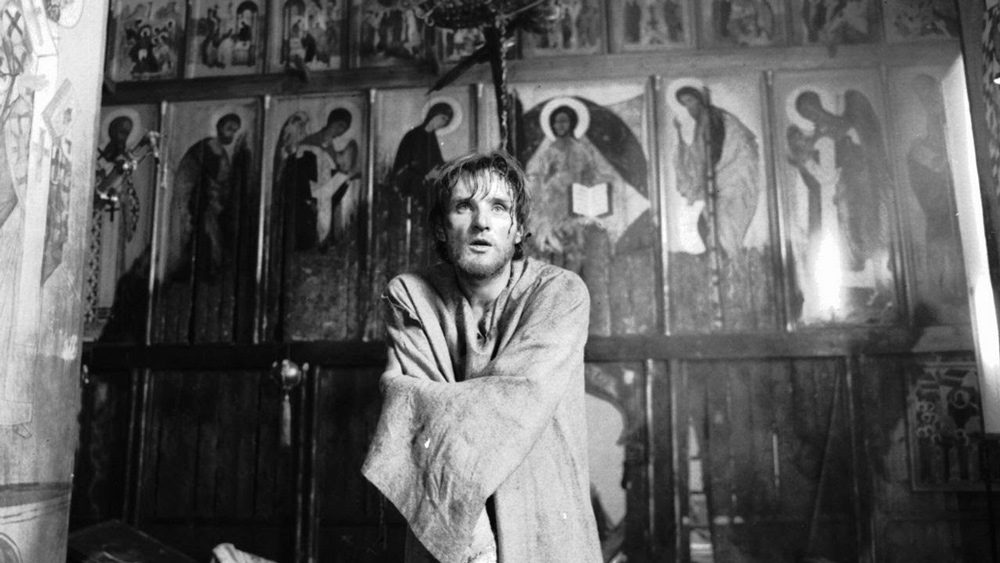 It’s been weird lately. First, I struggled to find the time to watch films. I was immersed in books, really good ones, and I didn’t want to stop reading. Then, once I had a film I thought would be a really good fit, it turned out that it wasn’t really Slow Cinema. This was particularly disappointing for Sudoeste by Eduardo Nunes from Brazil. The film starts in a superb fashion. It stunned me, and drew me in. I felt like floating in those beautiful long-take shots, magic, ghostly, simply very affective (and effective). Unfortunately, the film’s aesthetic changed somewhat after the powerful beginning, so that I decided not to write about it. A new subject was needed, and I remembered that I still hadn’t seen Andrei Tarkovsky’s early piece Andrei Rublev (1966), which is his second film, after the really good Ivan’s Childhood which was a great portrait of war trauma and young adolescents. Rublev is perhaps not an iconic work of Slow Cinema, but the film shows Tarkovsky’s later trademarks, beginning, of course, with the director’s use of long takes and a camera that sometimes moves independent of the characters it is showing.

While watching Rublev, I couldn’t help think about Béla Tarr and his first social-realist films. The films by Tarr that are now so well-known because of their particular style, didn’t come out of nowhere. Tarr developed it over time, and so Rublev was a stage in Tarkovsky’s development towards perfecting his almost magical cinematic philosophy that we admire today. It’s quite a change to films such as Mirror and Nostalghia, and yet you can see Tarkovsky’s soul in the film, which begins to shine. Rublev is not a philosophical experiential piece the way the director’s other films are. While it does contain important discussions that demand an engagement with the film text, Rublev is almost a straightforward historical epic, which surprised me at first. It was not what I had expected. What I didn’t expect either was that the film would be a strange back-to-the-future piece with scenes that strongly reminded me of Mirror, Stalker and Nostalghia. Everyone would argue that it’s always best to watch a director’s entire filmography chronologically (with the exception of Semih Kaplanoglou’s trilogy, which includes Bal), I found that my watching Tarkovsky’s oeuvre almost the other way around added a magnificent ghostly atmosphere to Rublev.

The film starts with an episode of an unfortunate balloon flight. There is a scene, almost right at the beginning, which shows the fascinating camera work that would later become so vital for Tarkovsky’s experiential pieces. In a long take, one man enters a house, drops what he has in his arms inside the house, then exists the house again. The camera moves freely. It’s floating almost, has its own mind and even though it does follow the character to an extent, it is also taking its own steps. All of a sudden, I was reminded of Alexandr Sokurov’s The Russian Ark, in which the camera followed its characters in much the same way. This type of camera has a dreamy, almost unreal nature to it. Something else caught my eye: once the balloon, which several people tried to keep on the ground before others arrived and attacked them, is in the air, Tarkovsky uses a remarkable POV shot that, once more, reminded me of Sokurov’s mirror lenses in Mother and Son. Now, the copy I have has not been restored, and I wonder whether those particular shots look slightly deformed and mirror-y (here’s a new term for you, which I have just coined….you’re welcome!) because of the age of the film, or the quality of the camera. I’d like to jump to the conclusion that it’s supposed to be like this, because it genuinely brings something disorienting with it, something bizarre, something uncomfortable.

We find a similar “look” later on, when Kirill, Daniil and Rublev arrive at a house, where they seek refuge from torrential rain. There is a jester singing and dancing, before he is being escorted away by the Duke’s men. Here again, the camera lens seems to be slightly deformed, alluding to a rather round picture. It doesn’t feel flat at all, but it’s almost as though the camera alludes to a third dimension. Of course, I could (and I probably do!) read too much into it, because this particular look is not one of the main aesthetics of the film. Moreover, I know that Tarkovsky tended to work with whatever he had and he might as well had problems with the camera. Nevertheless, I like the idea that this deformed view on the world from above and on those people who enjoy the sexually charged songs from the jester is not as accidental as one might believe.

Contrary to later films, Rublev is progressing in chapters, that means chronologically. Although there are dream sequences, which upset the temporal order established by the chapters, the film runs more or less in a linear fashion. The first chapter, which contains the scene with the balloon I have just described, begins in 1400. Fifteenth century Russia was a tumultuous country, never really at peace, and Tarkovsky shows this in particular in the latter half of the film. For financial reasons, he had to cut a lot of battle scenes, which he had in the script, but which he couldn’t realise for lack of funding. Those cuts sometimes lead to disorienting jumps in the narrative that are more startling than sophisticated philosophical omissions. There is, for instance, a scene in which Rublev’s assistant finds a dead swan in the woods. In films such as Mirror, which are deeply rooted in themes like memory and dreams, I wouldn’t have been startled. I would have considered this to be a memory that violently appears (appears violent?) and which has a connection to the stories of remembering and forgetting Tarkovsky tells so often. Rublev, however, doesn’t fell like such a movie at all. Because of its linear, straightforward progression and its non-mysterious images, the dead swan appeared out of place and made me wonder if there wasn’t something missing. Have I missed something? Is the explanation for this still to come? I wouldn’t try to find explanations for anything in dreamy films, but here, I have to say that I was almost annoyed about this scene, which could have been cut easily. (And I cannot believe I’m actually saying this about a film by Tarkovsky…)

Andrei Rublev, as we know, was a painter, whose The Trinity is supposedly his most famous work. Tarkovsky shows very little of his life as a painter. In ways similar to the struggling filmmaker in Lav Diaz’s Century of Birthing (2011), we witness several discussions on art and the role of the artist. The actual act of painting is positioned in the background. Instead, we hear Rublev struggling with the task of painting The Last Judgment: “I can’t paint this, it’s disgusting.” Rublev doesn’t want to frighten people and would rather paint something of a lighter nature. I would agree with the fact that Tarkovsky makes a statement here about the struggle of the artists with his conscience. But the layer underneath that surface is the use of artists to promote certain images. At the time, painters worked on behalf of a duke, or other high ranking state officials. They had to paint what was expected of them, even though, as Theophanes, the Greek points out, their works and even they themselves are attacked for the images and messages they portray in their works. They do so on behalf of someone, and often suffer for it – either at the hands of others, or at the hands of their own conscience.

The theme of conscience is present throughout the film. The tartars attack the city of Vladimir. Andrei, who is in the city to paint the church, witnesses the atrocities. When one of the attackers kidnaps a woman (supposedly to rape and kill her), Andrei kills him with an axe. What has he done? Once the attack is over, and silence returns to the church – the camera shows us dozens of dead, among them children – Andrei is visibly shaken by what he had witnessed, by the sheer violence, by the fact that men are that cruel, that men simply kill other men (“We’re both Russians”, we hear a young man pleading while trying to escape), that Man is no better than a beast. This event leaves Andrei traumatised. He hallucinates and re-encounters Theophanes. Almost furious, Andrei tells him that he has worked for people all his life, but that people are not people, suggesting that they’re mere beasts. Consequently, Andrei takes a vow before God: he would never paint or speak again, the latter of which reappears in another context in Lav Diaz’s Heremias – Book One (2005). This vow is not only the result of what he has seen. I firmly belief that Tarkovsky makes a point on the painter’s conscience here. In fact, Andrei has sinned. Even though he rescued a woman from certain torture and death, he himself has killed a man. He himself has turned into a beast. He himself is no different than all the others.

Tarkovsky plays here with sound and silence, almost deafening silence, which he would later reuse in Stalker and Mirror. There is something ghostly about it, something traumatic, as though the explosion of violence has deafened not only Andrei, but also us. In minimising the sound, slowing down sound effects, the director disorientates us temporally. Andrei’s trauma and that of the village becomes palpable. What follows is a shift in narrative towards Boris, a young man, who pretends he knows the secret of bell making and is hired by the Duke to make a bell. Andrei moves into the film’s background. As a silent monk he is no more than an onlooker, a bystander, visibly angry at first, then quieter in later years. He becomes a silent observer of Boris, whom he seems to use as a mirror of himself; a talented artist, who struggles with himself, with his work, with the burden of having to create. The film comes full circle, picking up the same themes and applying it to another character, whose emotional torment pierces through Andrei’s shield, which he had kept up for 15 years.

It is quite remarkable to me that my first impression of the film was not a good one. I wouldn’t say that I didn’t like the film. It was just too ordinary, compared to what I know of Tarkovsky. And yet, this is, except for one single essay (and conference papers which I have just copied and pasted), the longest post on this blog. Andrei Rublev seems to build a nest in my head after all…