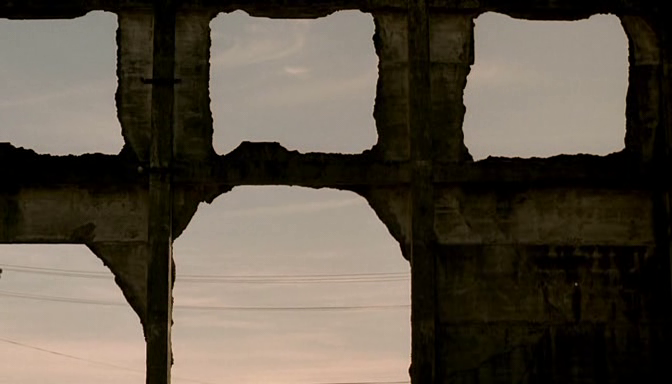 I think (although I could be wrong) that this post is a premiere, as it is probably the first post about a slow film from Chile on this blog. It does make me proud a bit, I have to say, because it means that the site keeps branching out. More discoveries from more countries – this is exactly what I’m aiming for. El cielo, la Tierra y la Lluvia by José Luis Torres Leiva was a good guess after I had read the synopsis, and it turned out to be a wonderful, beautifully shot film that was a pleasure to watch.

What impressed me most about the film where the photographic frames that, at times, took my breath away. And the utter and complete defiance of a three-part narrative arc, with up and downs which would normally keep the viewer going and engaged. The narrative progression is flat, like a flatline on an ECG. Perhaps this describes Leiva’s film best. This isn’t a bad thing at all. In the end, the narrative, the story of depressed characters at the margin of society, fits this flatline rather well. Their lives are mostly uneventful. There is not much happening, except for the usual routine that weighs them down. Ana, one of the main protagonists (whose name we only learn more than one hour into the film), is a good example for this cinematic flatline. We don’t know much about her. The director doesn’t provide us with a background story, nor anything else that would be useful to follow her as a character. She is in the here and now. Neither her past, nor her future really exists. Her life seems to be an eternal present, a present which is dragging on, and drags her with it.

Leiva’s mise-en-scène adds to the idea of a flatline, of being dragged through an endless now, through everlasting difficulties that never seem to end. The film frames are drained of colours. They’re dull, uninviting, a perfect mirror of people’s lives. Some frames are cramped, others empty. Both represent the characters’ minds, full of concerns and worries, empty of hope and a future. There is an interaction between the two extremes that manifests itself in the film’s visuals and character development. Ana works in a shop, uncomfortable with her role. She makes mistakes that lead to her being sacked, dragging her deeper into an economic crisis that defines her life. But this is not all. She looks after her mother, who seems to be paralysed and in need of round-the-clock care. Ana pays an elderly woman to be with her mother for the time she is at the shop. At other times, she administers injections to her, tries to feed her. One can feel that death is coming, and one cannot be sure whether it would lighten the burden for Ana, or whether it would, instead, increase her suffering even more.

Ana and the other characters are floaters. They are caught up in a torrent of problems that life confronts them with. But while floating, they also get drowned here and there. It feels as though life is dragging them to the bottom of the sea while they try to keep their heads above water; economically and mentally. The quietness of the film, the lack of dialogue, reinforces this weight, invisible at times, and yet present. We see mental images, mind images, translated into pictures on a screen. There is longing, there is a desire to break out of this circle. In one scene, Ana stands in front of a window. She has just changed and cleaned her mother’s bed sheets. The bed sheets are hanging outside, in the pouring rain. Ana is inside looking out. We can see her in a mirror image of the glass with the camera’s focus remaining on the bedsheets outdoors. One can sense that Ana wants to break out, but she seems trapped. What can she do?

Even more trapped is another important character, who, to me, actually takes the main role in the film, because she embodies everything that is burdensome, everything that functions as a trap. The young Marta is mute. The director doesn’t even make clear whether she is deaf-mute, or mute. Or why she is mute in the first place. Is it physical or a psychological reaction to a traumatic event? We can only assume. Like Ana, Marta is a character without a history. She simply is. This is the defining characteristic of the film; we see what is, not what has been. We cannot be clear about Ana’s relationship to Marta, nor about anything else. At one point, Ana finds Marta at the seaside, crying. She takes her to her brother, not knowing what went wrong. At another point, Marta attempts to kill herself. She walks into the sea and hopes that the waves sweep her away. She is saved. Drenched to the bones, Ana and her friend drive her home, silent. What happened, is not spoken about. Silence is deafening, silence is muting.

Marta appears to be the one character who takes action to break out. She does so in a violent way, but she no longer seems to be capable of bearing the weight of life. She takes action, no longer accepts being passive. Towards the end of the film, she disappears. Whether she has finally succeeded in killing herself – the director leaves it open. Ana and her friend search for Marta, but without success. Has Marta succeeded in breaking out? Is she now at a better place? Ana’s mother is. While Ana stays at Toro’s, where she has been working as a housemaid since she got fired at the shop, her mother, alone at night, dies. The director doesn’t comment on this death. Like Marta, Ana’s mother simply disappears. Is her death Ana’s fault? Is her absence the cause of her mother’s death? What did the mother go through while alone? No answer is given. The director records. He doesn’t answer. He triggers questions, but doesn’t help us finding an answer.

It is only then that Ana, whose facial expressions hardly change throughout the film, breaks down. The weight is too much. She can no longer bear it and seemingly falls apart in Toro’s arms. The camera, in smooth movements, then follows her walking along a wooden path. But rather than following her right up to the end, the camera abandons her, like everything else around her in life. The camera pans further and further, getting embalmed by trees, repeating in some ways the second scene at the beginning of the film. There is a degree of smoothness, a certain degree of peace in this long-take which wants to bring closure to what we have seen. But it cannot hide the fact that there is no closure. This would mean that the film’s characters have access to a past, to a future, but they don’t. They continue to hoover in the present, in the now, drowning in their unsolved daily problems all the while trying to keep their heads above water. Life continues for them, in a flat line.