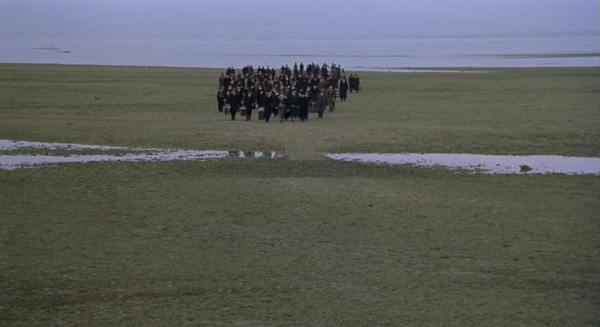 It took me much longer than usual to write my new blog post, which is primarily down to health reasons. An inflamed elbow could, in theory, be a blessing if you want to see films. What do you need your arm for? The problem was that Ì couldn’t take notes over the course of three hours, as it would have been the case with my very first Angelopoulos film. I had to give my arm a rest, all the while trying hard to progress with The Art(s) of Slow Cinema magazine, which is almost, almost, very nearly done!

There isn’t always a particular reason for why certain directors are not yet in my A to Z list. Theo Angelopoulos, from Greece, is one of those filmmakers that have been named in the context of Slow Cinema pretty much from the beginning. Yet so far, I have never written about him. I have been asked about the reasons for this several times before. There has never been anything in particular which made me avoid Angelopoulos until now. Once my PhD took a turn towards the films of Lav Diaz, I felt that I had to focus on those first of all, or on others that seemed slightly similar.

Now, there is something about The Weeping Meadows that I find difficult to put into words, and I’m not even sure what it really is. Let me say it with a screen grab…

This is not only a beautiful shot, albeit it needs to be seen in movement in order to be appreciated properly. The Weeping Meadow is a film, which continues where Andrei Tarkovsky left off with The Sacrifice. In this very film, Angelopoulos is the most Tarkovskian of Slow Cinema directors. All slow films are, in one way or another, put into the context of Tarkovsky’s “sculpting in time” concept. Especially at the beginning of writing about Slow Cinema, the Tarkovskian philosophy was everywhere. This has receded quite a bit in the last two years or so. Perhaps, critics have realised that Tarkovsky itself isn’t as present in most slow films as they had wished for. Of course, Slow Cinema as a genre, or whatever you might call it, is indebted to the work of Tarkovsky, but the Russian director wasn’t the only inspiration. He was a late inspiration that, I believe, helped Slow Cinema reach its fulfilment.

But let’s return to Angelopoulos whose The Weeping Meadow is the first part of the director’s trilogy about modern Greece, a trilogy he could sadly not finish. I’m almost sure that I might create a neologism here if I said that Meadow was a “wide” film. Every scene feels like a deep inhale, visuals that fill and feed your lungs. Do we ever exhale? To be honest, I’m not sure. Meadow felt like a series of inhales, or even one very long, three-hour long inhale. Scenes are wide-angled, and even if the frames are tight from time to time, a delicate zoom out allows us take a breath. Angelopoulos’s visual mark is width more than anything. It is about taking a step back, about taking a look at the wider picture. There is something about the smooth and delicate camera movement and its angles that makes it feel perfectly organic. It certainly is, after Tarkovsky’s Mirror, the most explicit example of Daniel Frampton’s ‘filmind’, which I have mentioned several times on this blog already.

The particular camera movements, which Tarkovsky had used in Mirror, for example when he explored Andrei’s seemingly empty flat, find their perfect copy in Angelopoulos work. Delicate zoom outs or zoom ins, a searching camera that very much embodies a searching person – one cannot deny that Angelopoulos created a major homage to the Russian director. And then there is The Sacrifice, Tarkovsky’s last piece which I considered to be a cinematic theatre play. The entire nature of the setting, of character behaviour, of dialogue – nothing really felt as though the aim of the film was to create a film. Rather, the aim seemed to have been to merge different art forms and their different natures, create a crossover and thereby create something new, or, if not that, showing how similar all art forms really are.

Meadow has very little of a film. The screen grab above, of Spyros, an elderly man – lonely, depressed – who has been betrayed by his son, who fled with his own wife-to-be, is the most explicit statement of it, and the scene didn’t come as a surprise in terms of its aesthetics. It was the fitting culmination of the feeling I had had about the film until then. I’m allergic to films in which actors and actresses stage something from their life, instead of live the role they’re meant to embody. Yet, Meadow falls into another category. The perfect orchestration between wide, observational camera movements and the specific theatre-like play of the characters creates a special cinematic experience, an experience that questions the strict categorisation of art forms and, therefore, also of audiences.

Angelopoulos’ story isn’t extraordinary as such. We follow Eleni, adopted as a young girl by Spyros and his wife, who, at the beginning of the film, flee the Russian Revolution and who return home to Greece. Much later, Eleni becomes Spyros chosen one, but his son, Alexis, runs away with Eleni. The two, always on the run, become a prism through which the viewer travels through Greek history up until the Greek civil war. It is a story that has been told dozens of times, by people from other countries, from other regions, other backgrounds. The theme of seeking refugee during political upheaval is very much the core of the film, interspersed with love scenes that are almost too much. It is a traditional film, with a traditional structure, and yet Meadow is standing out from those classical treatments of love, change and refuge at times of war.

Of course, there are the specific contemplative aesthetics, which help the film to stand out. Without them, the film would have been forgotten by people long ago. Essentially, Meadow‘s downside is its horizontal development. It is a look at the outside of things, at the outside of characters and their lives. Angelopoulos didn’t create a psychological film. He didn’t allow the film to develop vertically, i.e. we never really get into the characters. It is a “surface film”, a piece that stays on the surface, but Angelopoulos covers this weakness so cleverly, so breathtakingly, so rigorously that there is never really a doubt about its power and its strength. I’m certainly looking forward to seeing the second part of the trilogy.