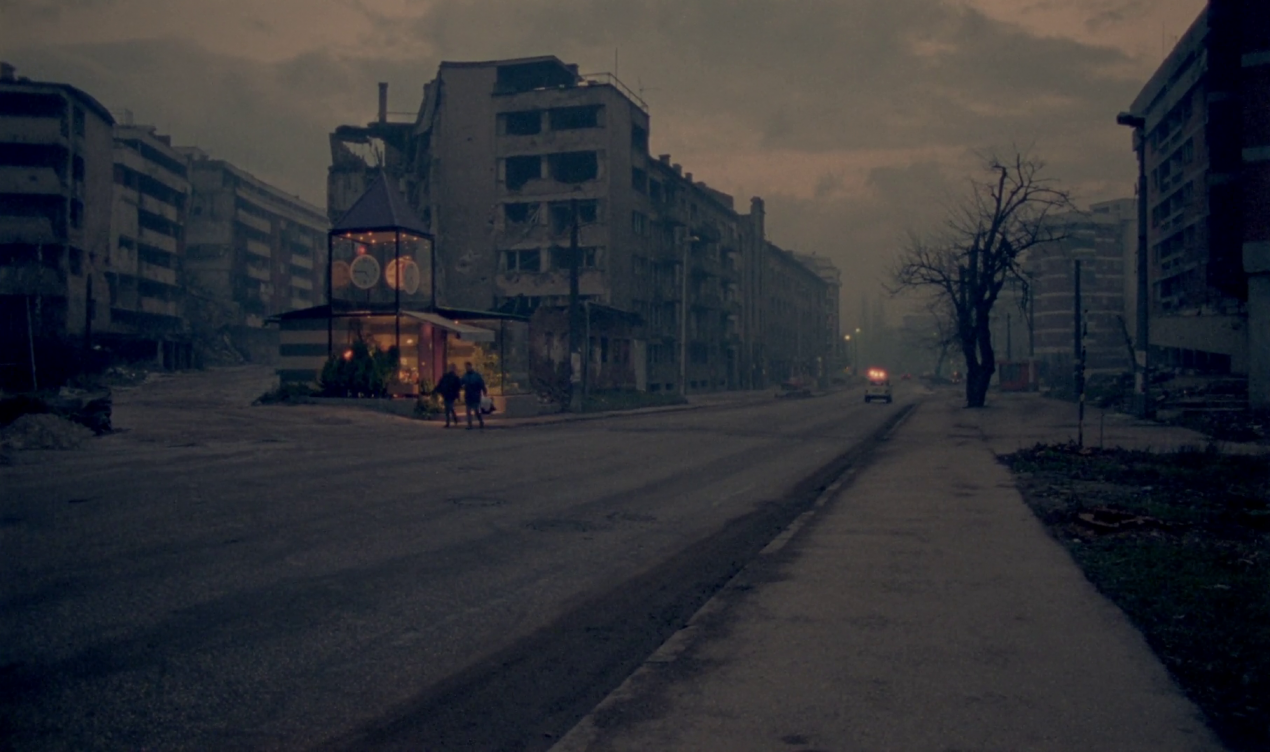 Since summer last year, I have slowly but surely made my way through the filmography of Austrian director Nikolaus Geyrhalter, who I have started to perceive as one of the most important filmmakers working today. He is the European equivalent to Wang Bing, albeit more composed. His films allow us to see what we usually wouldn’t see. He tells the stories of those who lack listeners. He is the listener, and so are we. The Year After Dayton, his second documentary, is set in Bosnia the year after the peace treaty has been signed. The 90s, after the collapse of the Soviet Union and with the ensuing collapse of Yugoslavia, were dominated by war in Europe.

I was born in 1988 and was well aware through TV news that my childhood was filled with news of brutal conflicts that felt like sort of next door, rather than at the other end of the world. There was not only Bosnia. The clearest I remember is the war in Kosovo, primarily because this was the first time I consciously heard adults around me speaking of the German army and their work there. We also had a new family moving into the house where we lived. They came from Kosovo as refugees, and one of the daughters became one of my best friends in the early 2000s. I learned a lot about conflicts, about Islam, and human suffering during that time.

The Year After Dayton is with a running time of over three hours a long film, but the time spent on the subject is absolutely necessary. Geyrhalter divides the film into four parts, four seasons, which allows us to see a change within the first 12 months after the Dayton peace treaty came into effect. The Bosnian war lasted three-and-a-half years, which incidentally coincides with the films running time in hours, and it was beyond description, not long after Europe had found peace once more in 1945. But as Geyrhalter’s film shows, the years of conflict became a starting point for a development which we still see today. Several interviewees in the film tell us that life before the war was peaceful because no one cared about the concept of national identity. Croats, Serbs, Muslims – they had lived alongside one another and one’s nationality or religion wasn’t an issue. The war has changed this.

One girl, a refugee who had to flee the violence with her mother, is interviewed while sitting on a blanket in the grass. She tells us about a friend she used to have, her best friend. They used to spend a lot of time together, but now she no longer wants to see her because she is a Serb, and Serbs killed her father. It doesn’t matter that her friend didn’t actually kill her father. It’s the nationality that counts, and she can no longer be friends with Serbs. The selection of interviews shows that the war has created a rift where once used to be a multicultural community.

“Every shepherd knows what’s good and what’s bad, but the governments don’t know this.”

Geyrhalter makes us listen to the simple people, those who were used as pawns and who lost everything. One woman tells us that she has lost 16 members of her family, her husband has lost 17. The people the director speaks to have lost their house, their job, friendships. They have lost limbs. They are no longer the same person. One boy we get to know hasn’t been to school for almost four years. We meet a woman who leaves the house for the first time in four years to see how the streets look like. It is a sad walk. There is little else but rubbles and destruction. Ruins everywhere you look. Geyrhalter films the woman from behind, allowing us to see the landscape of destruction which she sees.

“There is no love after Dayton.”

The Year after Dayton is a film about a huge sinkhole which has opened under the feet of people and which has sucked in everything that life had to offer before the war. Dayton challenges the way we speak about film. I, too, have said earlier that the film was about something. Everything – painting, literature, music, film – is always about something. Or so we have learned. But Dayton is about the opposite. Nothing isn’t an adequate word in this context, although what we see in the film is essentially what has remained after the war, which resembles nothing the people had known before. Nothing remains, and it is this nothing that the film speaks about. It is not just loss that is expressed in the film. There is a deep sense of this sinkhole, a sort of anno zero. The lengthy interviews, a trademark of Geyrhalter, give voice to an emotional void; a numbness that feels like resignation. Life continues, must continue. Yet one can sense change. What we see through Geyrhalter’s camera is the first generation implicated in the conflict. What we can sense, on the other hand, is the struggle of those who come afterwards, those who have to make sense of this brutal legacy.

As with Pripyat and Elsewhere, The Year After Dayton leaves one with an almost bitter aftertaste, caused by several questions at once: what’s next? What has since happened to those we have come to know? Is the memory of the war kept alive? What does the next generation do with this dark past? What remains today, over twenty years after the release of the film?