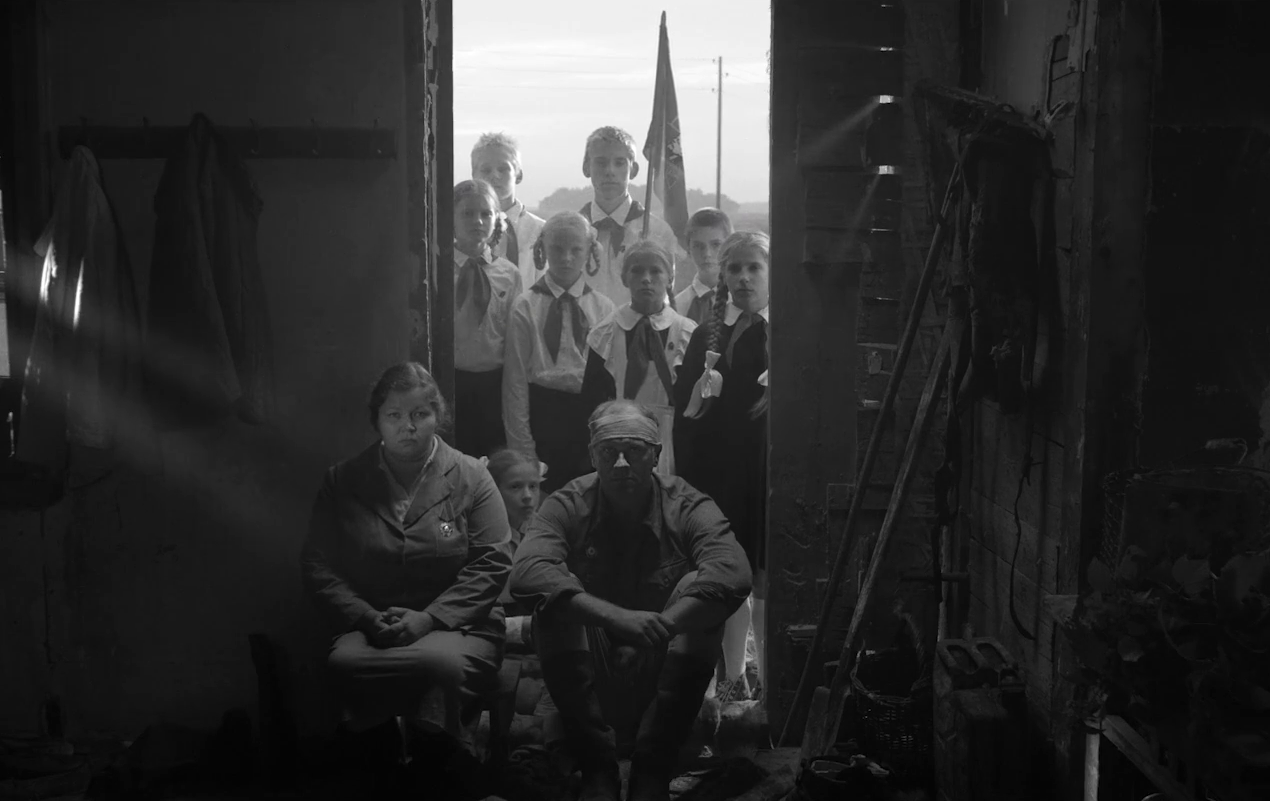 How does one handle a film, which so strikingly resembles human memory, in particular traumatic memory? The Baltic states have had a tumultuous history, most of which isn’t known in the world, let alone in Europe, even though the region is so essential to our identity as a continent. Estonia’s Martti Helde depicted mass deportations under Soviet occupation in In the Crosswinds, a great film that I highly recommend. At the time, the film struck me because of its borderline aesthetics between photography and film, and its novel approach to depicting trauma. It was not the usual, almost generic depiction of traumatic historical events, but instead a genuine attempt at coming closer, in its aesthetics, to what trauma and what follows might have felt like.

Laila Pakalnina walks on a similar path with her film Ausma (2015), which is difficult to describe in words. A boy denounces his father to the Soviet secret police and is in turn killed by his family. The content, as you can see, is pretty straightforward. It is the way the story has been put on a big screen with which I struggled initially. And I still do. For those who are familiar with Béla Tarr could easily be reminded of his work when seeing Ausma. There is something truly incredible about the camera work, combining beautiful shots (true masterpieces in photography at times) with an at times independent camera movement, which reminded me of Werckmeister Harmonies (2000). This independent camera tends to create a ghost-like atmosphere, and, of course, this is what we are at here in this village called Ausma (Dawn): the story of a boy who is murdered for denouncing his father has become a popular story of martyrism in East and Central Europe.

The boy, Pavel, wears the uniform of the pioneers. I remember the outfit from old pictures. The pioneers seem to be everywhere in the village. I couldn’t help but think of Michael Haneke’s The White Ribbon (2009), whenever I saw groups of children in their pioneer uniform, looking all the same, appearing menacing and everything but childish. They are the future, the new generation into which an entire nation puts its hope. When the head of the secret service comes into the village, he beguiles the children, enchants them, is like a loving grandfather to them. Truth is, he needs them for denunciations of their parents. He needs them as spies, as informers. He needs their innocence in order to pursue his cunning plan.

There is a permanent sense of disorientation in the film. Or perhaps a sense of permanent disorientation. Pakalnina’s camera tightens the frames in many cases to such an extent that the scenes feel like a stranglehold on your throat. There is no better way to aesthetically reinforce the sense of permanent observation, of potential denunciation, meaning a potential life in prison or execution. This is the whole point of authoritarian regimes: instilling disorienting and stifling fear, so much so that basic human bonds break down. But isn’t this what we need, even if unconsciously, in order to orientate ourselves in life?

Pakalnina plays a striking game with the viewer. She casts confusion, because clarity would go against the breakdown of stability and trust which she depicts. One scene, in particular, stayed with me. The entire village is coming together, laughing, when Pavel’s father, shackled, is led away. Is it really him who is shackled? Where am I even? Somehow, this entire scene, which, if I remember correctly, lasts for quite some time and it still feels as if I dreamt it, as if my brain made it all up, or at least some of it. This is why I cannot be sure whether what I have just said about this scene is correct or not. I don’t want to go back to the film and check, because I love those situations. It shows the true power of film, and the talent of the filmmaker to make us, the viewer, go through such phases.

Ausma is a film of standard length. Just over ninety minutes is nothing special I should mention on this blog, in the loving company of films such as West of the Tracks, Satantango, or Evolution of a Filipino Family. But this is only one part of the story, because the confusing, disorienting aesthetics make the film feel longer than it is. It doesn’t feel like an episode, like a film about Pavel’s story, but more like a look at societies under Soviet rule, be it during Stalinist terror in the late 1930s or in post-war occupied nations. The film is like a post-traumatic condition. You cannot comprehend it in one go and work through it. You will need to confront it several times to get to the bottom of it, and for the film’s images to settle down in your head.

I certainly will return to the film eventually. For now, I let it rest and see what realities or lies about the film my brain will come up with in the next couple of days. Ausma is a truly outstanding film, in many ways, and it makes me want to see more of Pakalnina’s work. I shall do explore her previous films first before I return to Ausma!