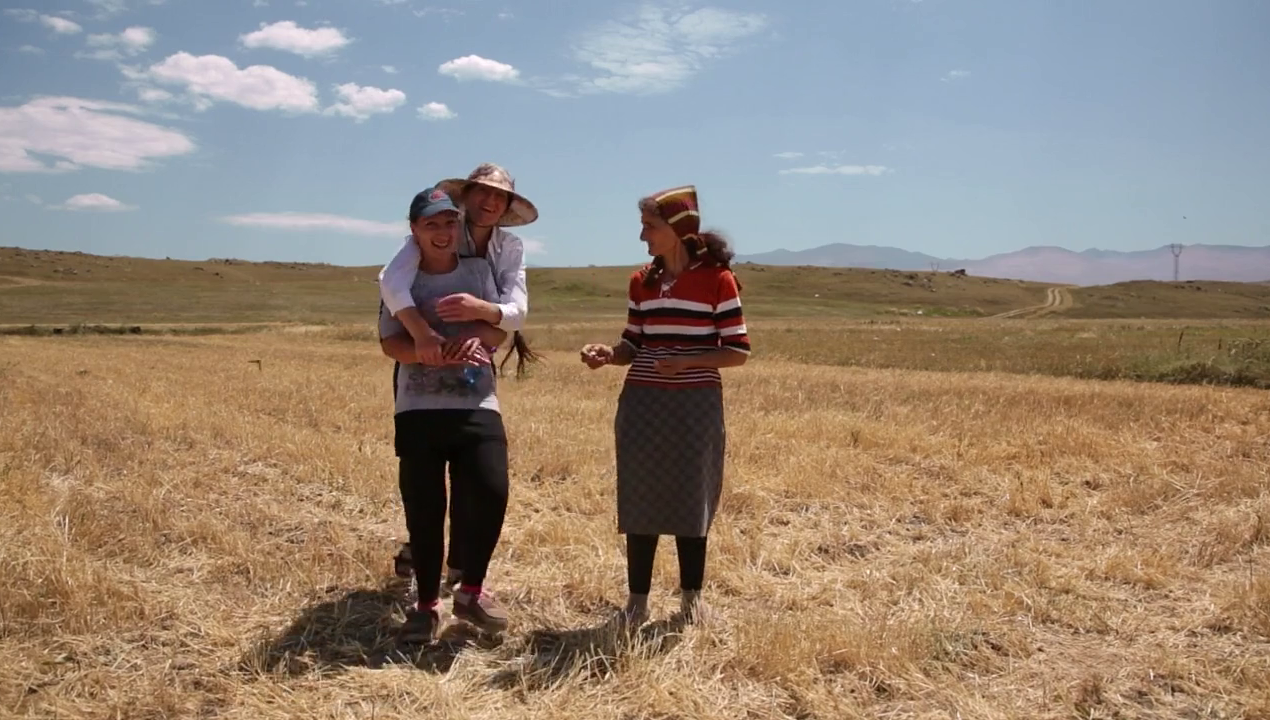 In Wang Bing’s Three Sisters (2012), three young children are left to their own devices. The mother left the family to live with another man, the father decided to work in the city. This was the only way he could provide for his three children. The father is there and is not there at the same time. He is always there at the horizon, but never present enough to act as a father.

In Birha by Ekta Mittal from India, we are made to feel the absence of loved ones as a result of urban migration. Fathers and sons, they go missing in a city which swallows them, just as it swallows all the other workers who have arrived in search for a better life.

Both films look at those who have been left behind and who now struggle to live in a disoriented world, a world of longing and searching. And of hoping.

This is not a country, my darling. All our nation is in exile.

The film begins with a shot of seven women around a table. One of them begins to sing, but she has to stop after only a few lines. She becomes emotional, remembers her husband, this beloved person who is today nothing but a phantom in her life. “All her family is in exile,” one of the other women says. This exile, it is neither political nor legal. It is, instead, a paradox: a voluntary exile out of necessity. This village has nothing to offer; no jobs, no future prospects, no hope for improvement. To survive, to feed the family, men must migrate to Russia. This is the only place to find work, to find a decent income.

“Do you have sons in Russia?”, Stepanyan asks a group of elderly men. “Do you want me to let them die here? They are slaves of Russian people,” one man answers. 9 out of 10 men, we learn, have left the village to find work in Russia. Stepanyan stays with the women, who take her in, accept and respect her as though she was one of them. But she isn’t. Stepanyan is the outsider, the young woman who has a very different life in Paris; the young woman who returns to this village to tell the story of something dying, to become a witness and a medium through which future generations will be able to remember the happenings in the village.

Stepanyan’s patient camera documents, but it isn’t a distant documentation. The director is there; she is present in every frame. While we see two young boys getting ready for their boxing training, we can hear her in conversation with the coach. When a young woman gets her hair ready, a brief look of her at Stepanyan’s camera gives away the director’s presence. A little later, another woman makes traditional flatbread, and the director asks her from the off whether she had spoken to her husband today. “He’s the center of my universe.” The women are fully conscious of Stepanyan and there is no attempt at hiding her presence. On the contrary, what fascinated me most was the women’s repeated attempts at engaging Stepanyan in a conversation while she was behind the camera. The result is that the film had a familiar, an intimate and personal feel to it, which is rare in the large output of documentary film.

The life we live isn’t a life. The soul suffers, the body suffers. The days pass without a meaning.

Village of Women is a film about longing, very similar to Birha, and yet very different, too, in its feel. Stepanyan observes the women in the fields, observes the kids doing their homework, listens to the memories and the hopes. There is Nar, for instance, who was married off aged 17. Her husband-to-be, Arthur, left for Russia shortly after the wedding. For 17 years already, they have lived apart for nine months a year. Only in the winter months can they be together. There is Shushan, whose husband hasn’t returned to the village for three years. Photographs on her table are a reminder of his presence, a painful reminder of what isn’t, of what could be. If only he was there.

Every take in Stepanyan’s film is a take of longing and of desire. The women speak about how they miss their husbands, how they cannot focus on what they should be focusing on, about how they await their phone calls. The children, too, miss their fathers and are anxious about their return. Is he in the car that they can hear at night? Which month is it, how many more months do we have to wait?

When the men do return around the end of November, there is no joy. The joy is dampened. The families sing and drink, and there are sparks of laughter. But this doesn’t feel like a joyous return. These are scenes of exhaustion and resignation. In a few weeks’ time, the men have to leave once more. The women and children will be left alone, left behind. What is there to celebrate? It’s been 28 years of distance for Hermine and her husband. 28 years. They giggle on the sofa, pop small jokes, but something is broken. She wasn’t jealous, Hermine says, but he wasn’t trustworthy, because he has worked abroad for such a long time. How can she know what life was really like for him in Russia? What about the women over there?

Pain. This is Village of Women. It’s pain, deep-seated pain and an uncertainty about where one belongs. The village we see is dying, the women we see are dying; metaphorically, certainly, but also emotionally. When the film ends, we know that this paradoxical life – void of love but full of routine with no end in sight – continues for the women in this village, this village of women.