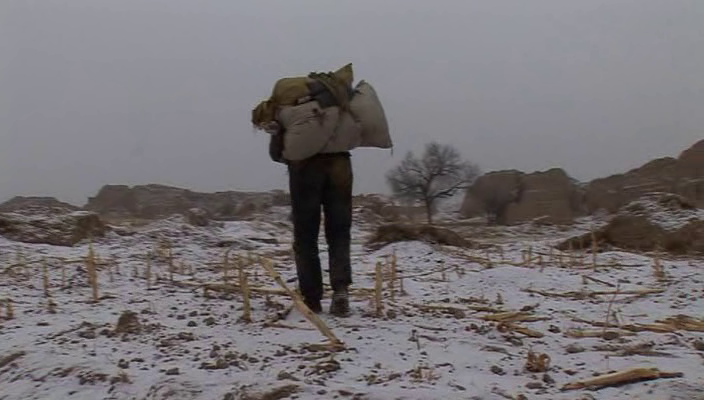 Anonymity and intimacy – these two characteristics work hand in hand in Wang Bing’s Man With No Name (2010), which is a mere glimpse of the life of a hermit, given the director’s otherwise very extensive and lengthy observations of people in their given environment. With a running time of around 90 minutes, one could almost describe it as a “normal” film. At the same time, Wang Bing’s normality differs from that of the standard viewer, showing this again and again, most recently with his eight-hour long documentary Dead Souls, which runs at this year’s Cannes International Film Festival. Man with no name feels like an insert, perhaps a bookmark or even a pause. A pause in which the director follows an anonymous subject and creates an intimate portrait of a man, of whom we know nothing but with whom we spend enough time to feel as though we’ve known him all our life.

Wang Bing’s sixth film has no beginning and no end. This negation that finds its expression already in the film title is one of the main forces throughout this observational documentary that jumps right in there, right into the heart of the story, if there was any. Wang Bing doesn’t introduce the man we’ll follow for the following ninety minutes. Stylistically, this is great, and yet it wasn’t so much by choice the director has done this. It was a necessity. The hermit he became fascinated with while shooting for another film simply did not speak. Even when Wang Bing asked him if it was okay to film him, he didn’t respond. If I remember correctly from a text I read not so long ago, the man merely responded by looking into the director’s eyes. And that was it.

All there was for Wang Bing was what he could observe. The man, perhaps in his fifties or sixties, has no name, no history, no personal stories. He is what he is: a man without a name. In a style that reminds one of West of the Tracks (2003), Wang Bing often follows the man wherever he goes. Staying behind, literally just following him, the director establishes a distance between himself and the man, but also between us and the man. He positions him in his natural environment with long and mobile shots. Over time, it becomes a film as much about the natural surrounding as it is about a man living in it and making use of it. The man uses what he can find to survive, to feed himself, to protect himself from the weather. His cave is his home, his kitchen, his bed. The cave is a microcosm in which everything and nothing happens. We have three meals with the man. Wang Bing takes us into the cave, shows us how the man cuts vegetables he’s harvested with a pair of scissors, shows us how he cooks with broken pans and little else.

Nothing seems in a good shape. Everything is used, damaged, dirty. Wang Bing doesn’t paint a utopian picture, but shows life in this man’s microcosm as it is. And in doing so, he creates a remarkable admiration of some kind. An admiration of a man who has (possibly) left everything behind, who lives in solitude, removed from civilisation, in the middle of nowhere but who sustains himself without seeming to bother. Instead, it looks as though the man enjoys his freedom. Yes, if there is perhaps a third characteristic of the film – on top of anonymity and intimacy – then it must be the idea of freedom. The hermit doesn’t speak. Nor does he communicate through other ways. But the longer we stay with him, the more we get the feeling that the man is not outwardly unhappy. It feels more like a film that places a genuine emphasis on breathing space. One cannot neglect the important aspect of time and duration in Man with no name. Nevertheless, I believe that the film is more about space (in its many forms) than it is about time. It is, in some ways, an ode to space, to emptiness, to absence…and it all begins with the title.

The fact that there is no dialogue makes the film appear much slower than Wang Bing’s other films. Usually, the absence of dialogue gives way to ambient noise. Man with no name gives way to very little. We don’t hear birds, or anything else that would make us think of life. Sometimes we hear a few steps on the ground, and we also hear the heavy rain plunging from the sky towards the end of the film. But besides this, there is little else. The soundscape seems as empty as the surrounding environment. Sound tends to make us perceive the narrative progression as being faster. Dialogues, monologues, music – everything that attracts the ear is perceived faster than a collection of still images. However, it is the latter which Wang Bing focuses on. Time is seemingly stretched. It seems slower. It feels as though it is running at a different pace. And indeed, I had to think of an interview I had heard on the radio with a scientist whose name I sadly cannot remember. He said that it had been proven that time was running slower in the mountains (where our hermit is living) than in the plain. It is a very small, barely perceptible difference, which only shows on our mechanical clocks after at least 10 years. Nevertheless, it is a fact that time is different in different places. While watching the film, I could feel this difference for the first time.

I have to say that I was not a fan of what I saw at the beginning, but I became more and more enveloped by Wang Bing’s footage. I began to marvel about the idea of freedom, of the return to a life where man and nature live in harmony. For me, it was this aspect that stood out in the end, a feeling of longing in some ways, something that is easier to achieve if you’re surrounded by nothingness, regardless in what form. I believe that Man with no name is, in its very simplicity, one of the best Wang Bing films (albeit they’re all good!) and I might actually see it again!