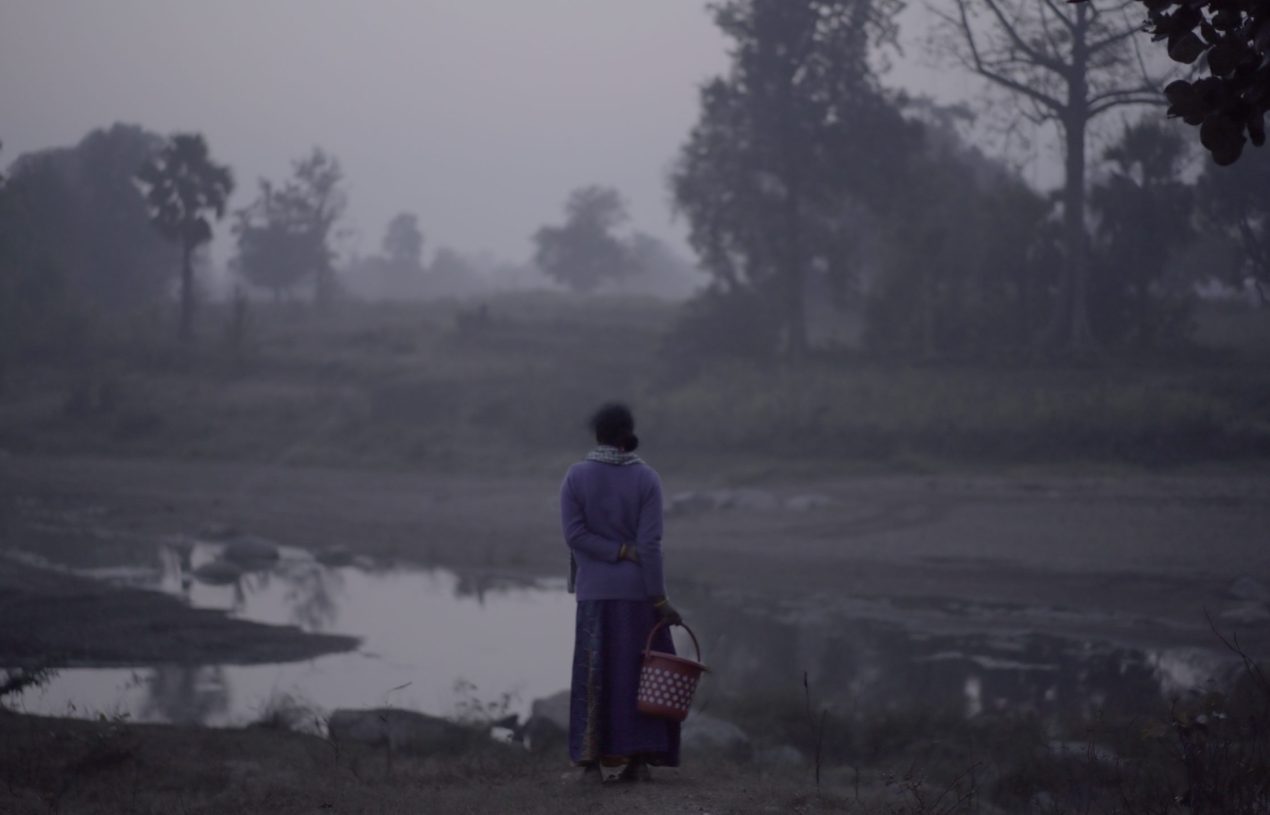 After an excursion to the Tamil region of India thanks to P.S. Vinothraj’s Pebbles (2021), I travelled further north this time to explore the life of a young couple, former Naxalites who decided to surrender and to lay down their arms. It’s been fifty-odd years that this Maoist rebel group fights against the Indian state, fighting “for the land, to save the jungle. To save the gold and the silver”, as Somi, a former fighter and the film’s protagonist, tells us at the end of the film.

The director-trio Arya Rothe, Cristina Hanes and Isabelle Rinaldi observe the life of Somi and her husband, five years her junior, but a relationship based on true love. This is the impression the two give, especially when Somi speaks to her doctor, a curious man full of questions about how the young woman joined the militants, how she got to know her husband, etc. At the centre of the film is the conflict between the quietude in the foreground and the couple’s worries about the future of their two children always palpable in the background.

When the film begins, Somi is pregnant with her second child. The first-born is five or six years old, ready for school. He’s got a cute, innocent nature. He’s full of life, and he loves to joke. Two worlds collide here: the world of adults, who are aware of their past and what this will mean for their future; and the world of kids who don’t have a past just yet, not as such, but whose parents’ past will define their future without their being fully aware of their fate yet.

The parrot in a minuscule cage comes to mind, with which the film (visually) opens. A sort of prison with nowhere to go. It’s being fed, but cannot feed (or fend for) itself. This first shot sets the tone for the rest of the film.

Because what’s happening to these Naxalites who surrender? They are being given accommodation, which looks rudimentary at best. They don’t get farm land or any other possibility to make a living, to become a vital member of society. The act of surrendering becomes an act of imprisonment. The former militants have their wings clipped, which has major ramifications for their children and, eventually, for the peace process, as we will see.

If I don’t have a girl, screw the prayers and God!

Several times, the directors show us the pathway outside Somi’s house, shot through the wooden make-shift gate. In this double-framing, which reminds me of Fred Kelemen’s in the films by Béla Tarr, we see people walking past, a boy running after a big car tyre, a woman purchasing jewellery from a mobile seller. Life continues, runs its course, but for some reason, within the small terrain which Somi and her husband had been allocated, it feels different. Time and again, we return physically and visually to a camp fire, where the family sits at night. The fire is where everyone comes together, where thoughts and worries are expressed and exchanged. It is the place where the people we see — not only Somi and her husband, but also Somi’s parents, for instance — open up to one another.

Surrendering isn’t easy. It poses a risk to yourself and to your loved ones. Surrendering means so much more than simply laying down your arms. It means entering a part of your life that is governed by permanent insecurity. At any moment, those who used to be your comrades can become your killers. And where your relative freedom as a militant is exchanged for bureaucratic hurdles that are designed to make you fail, designed to punish you.

When Somi and her husband sit in front of a bureaucrat because they need a tribal caste certificate for their first-born to be able to go to school, we get a feeling of what surrendering entails.

Even if they study a lot, it will be useless: There are no jobs.
We must give them education. Job or no job.

Not only do former Naxalites feel unprotected because the police doesn’t bother investigating attacks on those the militants consider traitors. They are actively excluded from public life. The key: a tribal caste certificate, an essential document to verify the lineage of Somi’s first-born. While Somi herself owns such a certificate, her husband doesn’t. He fled his native region, which is the only one that can issue such a certificate. He would need to return home, he would need to run the risk of being killed only to get this document because this is what the law says.

Somi’s boy is enrolled temporarily, but the young couple soon faces a harsh reality. The boy’s school is far away in the city. Several scenes show him in his new surrounding, which feels less like a school and more like a place of indoctrination, a place that seeks to form children into patriotic citizens ready to defend the nation, no matter what. The boy feels out of place, he appears more stunned than anything else by this new life. When his father visits for the first time in a while, tears take over.

It was our fate to have a life like this.

As it is impossible for the parents to get the father’s certificate, the boy is sent home. His education is suspended. One cannot help but feel torn: the boy wasn’t happy at school, he felt out of place. Would he be better off at home with his parents? Maybe, but what about his education? Who will teach him how to read and write? It’s not going to be the parents, so what will happen to the boy?

The truth is that at the end of the film, one realises that the government’s strategy of isolation and punishment via bureaucracy won’t help them to win the fight against the Naxalites. On the contrary, they push the children of those who surrendered back into the arms of the militants. Without education, no job. Without a job, no life, no hope, no dreams, no perspective. The children will join groups that give them a sense of community, a raison d’être. Without making it explicit, Rothe, Hanes and Rinaldi point to a failure (and to an absence of will power) in society, which, eventually, will have dramatic consequences for everyone.