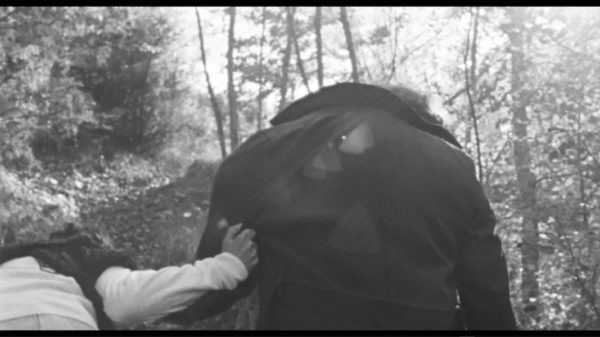 A man and a woman walk slowly through the woods. The camera follows their steps. They seem exhausted. The woman stumbles and tries to hold on to the jacket sleeve of the man. Birds are chirping, crows are cawing. There is something both peaceful and ominous in the air.

Claudio Romano’s Ananke is an observation of our selves, in parts based on Greek mythology. Romano explained the meaning of the film’s title, which, at the same time, is the name of the goat the two unnamed characters own, in an interview:

In greek mythology, Ananke stands for necessity. Ananke is the force that governs everything. It’s the deification of the unalterable necessity of fate, which is an unavoidable principle and a regulative law, without which we would be swallowed by Chaos.

This chaos is palpable in Romano’s film. His two characters go about their daily life. Very much in the style of Béla Tarr’s The Turin Horse, which the Italian director wasn’t aware of while he was working on his own film, the film shows the man and the woman get dressed, comb their hair, eat. In long observing takes, Romano depicts the weight of time which weighs heavily on the little house the film is predominantly set in. Damages on walls become wounds, wounds become scars. The ageing interior of the house has something mysterious to it, a mystery that also envelops the two characters. Who are they? What is their relationship to each other? While in Tarr’s film the relationship between the man (father) and the woman (daughter) is clear, Romano keeps it open, asking the viewer to decide about what s/he sees in those two characters.

The film’s idyllic atmosphere and its peace is disrupted when chaos breaks out. Ananke, the characters’ goat, named after the Greek goddess, disappears and sets a desperate search in motion. The sudden absence of the goat brings the people’s dependancy on it into the open. What becomes apparent is not the fear of what has become of the animal, but rather the fear of what will become of themselves. Ananke becomes a mirror we hold up to ourselves, because the film isn’t so much about the two characters, or the goat. It is a film that represents Man’s relationship to Nature.

To me, this is a moving-image representation of what I have been mentioned several times in connection to traditional Chinese landscape painting. Contrary to Western landscape painting, Man was the crowning glory. He overpowered Nature. This wasn’t the way Chinese painters perceived of Man’s role. He was simply one part of the whole, a piece that adds to the vast jigsaw puzzle called Life. Romano shows in Ananke that Man still very much considers himself to be the crowning glory and that he believes he can master Nature.

But it’s not that simple. Nature has its own ways, as the goat’s disappearance shows. And this is precisely where Man’s perception of himself begins to show cracks. “Anake! Ananke!”, the woman shouts over and over again, her voice almost terrified. Her terrified shouting, her desperate searches – all of this has its root in her realisation that she and the man who accompanies her are no longer in a position of power. They’re acted upon, and struggle with their role.

What remained for me after the film was the woman’s desperate shouts. They are still ringing in my ears when I think of the film. Ananke is a film about power, in some ways, but also about a lack thereof, about emptiness, which is palpable in every frame. It is perhaps best to end this post with Romano’s own words, who describes this interest in absence and emptiness:

Emptiness, or absence, is maybe the main theme of the film and the most important concept of my style, my method, my filmmaking. Absence is all I search, in life as well. To discard everything, to taste the void. Absence means to not see, to not perceive, and also to see and to listen elsewhere. Absence is also a political choice, an essential life choice to me. It’s about focusing on what’s not there, what we cannot see, to appreciate what is there and what we do see. To claim my presence in the void, to not occupy common spaces. This is related to Nature, to God, or spirits, in my opinion. The absence of the goat, for example, is more than a vanishing. It reminds us we cannot manage everything. Almost everything happens out of our control and an explanation is not needed. The absence of an explanation: this is another concept very important to me.