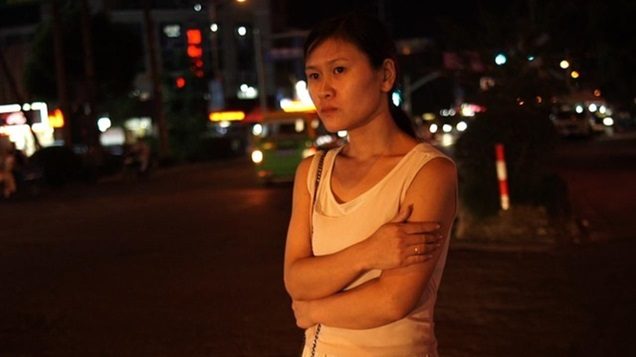 I don’t know whether it’s only my perception of it or whether there is indeed a real surge of interest in the films of Wang Bing here in Europe. It is strangely satisfying to see an advertisement in your daily newspaper for the director’s Ta’ang

on DVD, followed by the announcement of this year’s dOCUMENTA (Kassel, Germany) that they will host a full retrospective of Wang Bing. And then I browsed aimlessly through the website of French-German TV channel ARTE and what did I find? The director’s new film Bitter Money.

As, for instance, West of the Tracks, Bitter Money is an impassioned look at the life of workers in China. To see these two films almost side by side is a very interesting matter. Tie Xi Qu

as well as Coal Money are about (quite literally) the dirty work: extracting coal, manufacturing metal sheets and electric cables in factories that are below any health and safety standard. Especially West of the Tracks, to me, showed the older generation. There were several men in their late forties, early fifties who hoped that their children would have a better future. In some ways, Bitter Money seems like an investigation into whether this hope has materialised.

What Wang Bing’s film shows first of all is the shift in China’s economy. Bitter Money is a film about China’s textile industry with a particular emphasis on small private sewing rooms. The director does not explore the conditions in the main clothing factories, but focuses instead on the many private sewing room owners and those who work for them. As is common practice with Wang Bing, he singles out a few workers and follows them throughout the film’s two-and-a-half hours running time. It starts in a claustrophobic room in which several young people sit together. It appears to be one of the girl’s last evening at home, as she is taken to the city for work. Wang Bing keeps all of this anonymous. I’m not sure whether he ever mentions the name of the teenage girl, or whether he wants her to stand in, anonymously, for all the other young people who migrate away from the Chinese countryside in order to look for work.

The girl previously said that she had changed her age on official papers, which seems to be doable in some parts of China but not in others. It’s likely that she did this in order to be considered as eligible for work. Situations are dire in the countryside and people do whatever it takes in order to earn money. The girl is making her way to the city first by bus, then by train. Wang Bing remains for a very long time in this train, a night train it seems, filming the people sleeping, exhausted from the previous part of their journey. Others play cards, but overall it’s quiet in the train. It startled me when the people arrived in the city (which is also kept anonymous, if I remember correctly) and the sound level increased immensely. You get a real sense of the bustling life in the city; the people, the cars, the honking, the sheer speed with which everything is happening.

Initially, Wang Bing follows a group of three young people, amongst them the teenage girl and her cousin. He stays with them for a little while, while they move into their new home – an austere room with only the very basics with the busy street right outside the window (“This is what it’s like when you work far from home”, one of them says) – before he shifts his focus away from them. The story of the teenage girl who changed her age to make it to the city for work merges with the story of a thirty-something woman who fled her abusive husband. I believe that this man, whom we later see hitting his wife, is the only one who is clearly named throughout the film. Wang Bing singles him out and thereby forces the viewer to recognise the man whenever he pops up in the director’s frames.

And this he does when his wife comes to see him in his shop (“their shop”, as she insists) in order to ask him for money. The marriage had been problematic since the beginning, but it boiled over when she invested in a small textile company. Now, her body is covered in bruises. Wang Bing remains outside of the shop and films the violent encounter between husband and wife, the former repeatedly threatening that he would kill her, that he would skin her alive. He repeatedly grabs her by the throat and hits her, all the while Wang Bing keeps recording. Ethics are a thoroughly interesting subject in the director’s films, and it would need another post in order to explore this in more detail. Suffice to say here that I did wonder when (if at all) Wang Bing would have interfered in this lengthy, very uncomfortable scene.

In the meantime, the teenage girl’s cousin is returning home, which sets the actual exploration of working conditions in motion. The young man complains about the long working hours – he begins at 7am and works till midnight with no lunch break – and decides that this isn’t a life for him. This is followed by the first extensive sequence showing people manufacturing clothes, seemingly in a normal house, upstairs, with only a sewing machine and pairs of scissors. It’s very rudimentary, and looks almost clandestine. There is one girl in this group of people who doesn’t look older than 14. Indeed, Bitter Money, as mentioned above, shows the young generation more than anything else, and investigates whether they have a better life than their parents had hoped for.

After two-and-a-half hours, I’m not sure I can say that they’re better off. If you look at West of the Tracks, you could say that there are less health hazards in the textile industry, at least in those areas that Wang Bing shows us. However, there is little else that sets those young people off from their parents. Worst of all is, perhaps, that they don’t have a home to go to. The workers live together in austere rooms. Their actual homes are often so far away from the city that they can’t go home without taking too many days off work, which means a huge loss of money. While workers in West of the Tracks seem to be long-standing colleagues who have spent half their lives together, workers in Bitter Money appear lonely. They work together, but they usually don’t speak. It’s about making the most shirts, the most coats during the day. Anything that can distract is avoided. If a worker isn’t fast enough, s/he gets sacked. In this way, there is a persistent change in the work force and it’s not possible to strike up year-long friendships that help the workers through hardships.

What Bitter Money shows is the individual rather than the collective. Compared to the director’s other films I have seen so far, this one looks very polished and quite deliberately edited in order to follow a three-act structure, something I have already noticed in his testimony film Fengming, a Chinese memoir. Bitter Money lacks the spontaneity that West of the Tracks showed, something that made the film unpredictable and that gave you a real sense of witnessing something. Despite my liking the film, I would say that the director didn’t manage to get to the bottom of what’s happening the way he managed it in West of the Tracks, which perhaps is down to the time spent on the subject matter. For both films, he spent over 2 years filming, but the end result is very different: there is a nine-hour piece on the one hand that contains all details of the collapse of an industrial complex, and a two-and-a-half hour film on the other that, to me, is strong, but could be much stronger if it had been given more time to breathe. I begin to wonder whether long running times aren’t best for documentaries, because you know that if a director has filmed for two years and the final product is comparatively short, a lot of material has been cut.