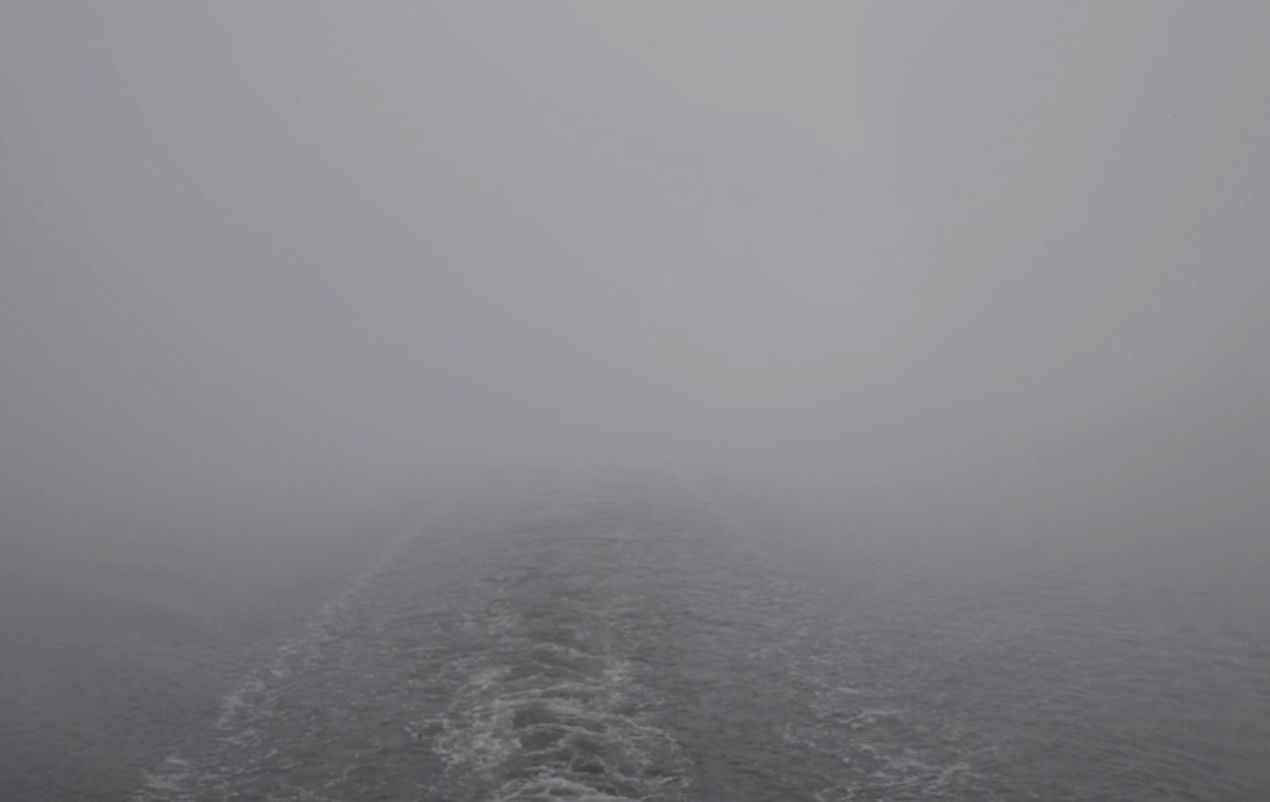 Certainly, I could leave this blog post blank and let you do the thinking. This is what “nothing” is there for; it allows you to fill in the gaps that others have left, deliberately or by accident. “Nothing” can be liberating.

What brought me to this post is a film I saw last night. In Praise of Nothing by Boris Mitic is is a satirical documentary about Nothing. Narrated by Iggy Popp, it’s a humorous take on our lives, on how we deal with others, with difficulties, or even with nothing. But the film also invites profound thinking if you do more than just let the film wash over you. It contains beautiful long shots, minimalist shots in most cases, a kind that one finds regularly in other slow films, although I’m not yet entirely sure whether or not I would classify this film as Slow Cinema. In the end, it matters little because In Praise of Nothing contains a lot that made me think about the more general nature of slow films and also returned me to a book I had read as part of my doctoral research, but which I have, if I remember correctly, never reviewed as such on this blog. I’m speaking of François Cheng’s Empty and Full (or Vide et plein – Le langage pictural chinois

in the original French).

François Cheng’s work teaches us a lot about how to look (at something), and how to appreciate nothingness, absence and emptiness which is so common in slow films. As Iggy Popp tells us quite rightly in In Praise…, “I (nothingness) am in every shot.” And it’s true. There is always en empty section in a film frame, or even in a painting. Even seemingly “full” paintings have their areas of what I would call rest. We struggle seeing this nothingness because we have gotten used to the capitalist idea that nothing(ness) means non-profitability. Non-profitability in turn is not desired, and so everyone needs to create something in order to fit into this system, in order to take part. Nothingness often only plays a role when we are exhausted from the capitalist hamster wheel and need to slow down. Then people flock to meditation where they often learn that nothingness is profitable after all, just perhaps not in monetary value.

What I feel more and more, especially now with film submissions I receive for tao films, is that slow film directors, just like Chinese painters during the Song dynasty period, for instance, use nothingness (either through a rigorous absence or positioning a certain something in the off) in order to express the state of their soul, or that of society, or even that of the world. The films are an expression of the soul; they’re not necessarily factual or try to teach us. Cheng puts emphasis on the importance of the soul throughout his work because it is key to reading (traditional) Chinese painting (but also slow films, I find). I have never felt so many souls, have seen so many takes on the human condition than in the films I have seen for tao. They go further than the classic Slow Cinema canon we know. They genuinely align themselves (unconsciously, I’m sure!) with what Chinese painters have described all along as how they approach their work and what they intend to show. And this has nothing to do of being aware of the painters’ desires at the time, or not. It’s about putting oneself into a mindset that favours nothingness.

According to Cheng, nothingness is a crucial means to create a relationship that blends us with nature, as well as the artwork and the viewer. It is not so much that we become one, but that we become aware of the other while acknowledging that whatever it is, it is our creation. That means that, again, whatever it is it is part of us, we’re part of it. When we speak about cinema, this element of nothingness might come through strongest in experimental films which present you with little else than slowly moving blurred images. It is the idea of an experience in which we create the meaning because the director has given us nothing; how to read his/her images, how to respond to them, how to make sense of them. These films leave you with nothing, and we blend into it because only when we see such a film is the film really complete. We play an essential role.

I have mentioned several times before the concept of a “vertical axis”, which Maya Deren so wonderfully described in the context of poetic film. In Chinese cosmology it is exactly there (as opposed to the horizontal axis which is all about fullness) that nothingness and fullness interact. Fullness always comes out of nothingness, while nothingness lives on in fullness. Again, we have this blending, this dependency. And again, this is, in a good film absolutely the case as I have seen so many times in the last five years of writing for this blog and in the last two years of my watching film submissions for tao films. There is a real understanding of this interaction between nothingness and fullness that allows one to contemplate, to think, sometimes to marvel at images. it is those times “where nothing is happening” that the real fullness of a scenes comes to the fore because suddenly we notice crucial aspects of the scene we’re seeing at the moment, or others that have already passed and return to our mind. But this can only happen in nothingness and not while being bombarded with fast-cut scenes in an action movie.

There is more in Cheng’s book, but I will return to this another day as I know that not everyone likes long-reads 🙂 For now this shall suffice to give you food for thought, and do try see In Praise Of Nothing. It’s a lovely film!