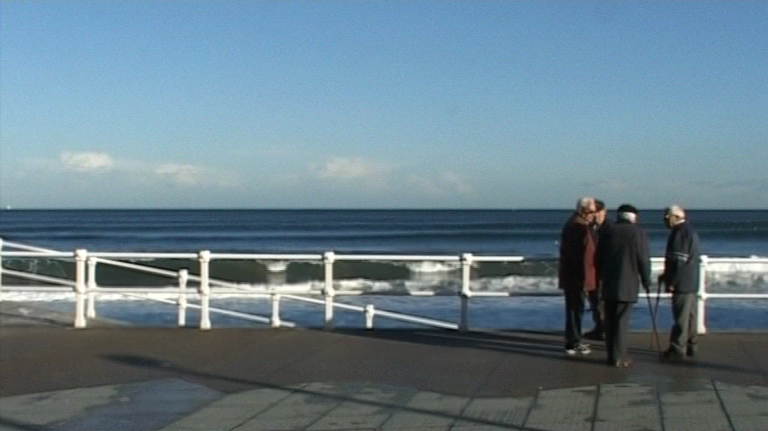 The beach. A beach. Somewhere. It doesn’t matter where we are, and Abbas Kiarostami knows this. What matters is his recording of the soothing and calming waves, small but significant in their way across the beach sand. The first take of Kiarostami’s Five

, which he dedicated to Ozu, is a meditative exercise. There are slow films, in which genuinely nothing is happening and emphasis is placed on simply breathing with ‘frames of nature’, and then there are slow films in which quite a bit is happening; there is dialogue, there is music, there is a plot that is pushed forwards. The Iranian director has created a film that resembles very much the former, with its five long-takes which show very little and which ask us to become meditative of nature.

The beginning of Five is a record of smooth waves arriving at the beach, seizing a small piece of wood and shifting it from one place to another. Kiarostami keeps the camera at a slightly high angle, which, to me, wasn’t intuitive. Whenever I film the water, I try to do it almost on level. I don’t know why this is more intuitive to me than any other angle. At the same time, Kiarostami put the viewer into the position of…exactly, the viewer. We usually see the water from above, bending down to examine something closely. And this is what we do with that small piece of wood, over and over again, for about 10 to 15 minutes, a wonderful exercise in staying with an image and with the sound. After a couple of minutes, it is perfectly fine (and probably acceptable, too) to close your eyes and imagine the piece of wood being shifted by the water, to imagine the waves; everything begins to happen in your imagination, the actual film image is no longer needed.

This is different in the next long take, which shows us primarily elderly people walking past the camera (which still focuses on the sea in the background) somewhere at the coast. People come and go, most of them alone. The motion that we could observe in the first take is very different here, seemingly more regular, albeit not as smooth. But it also appears slower. I haven’t yet figured out why that is the case. Perhaps it is the sort of visual pauses this take takes in between people entering and leaving the frame. Besides, people simple walk past the camera…there is, in fact, more happening in the meditative scene at the beginning of the film because there are a lot of details to observe. It takes a long time before this chain is broken; four people stop in front of the camera and have a conversation. It’s those small events that make a film such as Five

actually eventful and which do jolt us in our seats because these things don’t happen all the time as is the case in other films (which reminds me, I still need to see the films of Benning!).

If I look at those two first scenes retrospectively, I should perhaps say that the long-take in which ducks or small geese walk into and out of the frame, left and right, all the time, plenty of them, is a real explosion of action! It’s an amusing interlude just before Kiarostami plunges us into almost complete darkness. There is water, one can guess, perhaps a lake where frogs sit at the shore and help create a very special night-time atmosphere. There is also a vague reflection of something that, with time, turns out to be the moon – a beautiful take that, to me, brings home the idea of observing nature.

The use of the night with a hint of light reminded me strongly of Italian film artist Enzo Cillo, whose work is often using the night to its advantage and who plays with our expectations. Kiarostami remains with this scene for quite some time. It felt like the longest take in the film and what followed was perhaps the most beautiful recording of the entire film: the director remains at the shore, clouds begin to cover the moon and the screen turns black. We hear thunder and lightnings light up the lake. In split seconds only we see heavy rain drumming on the lake. We hear nature at its most forceful…and all of a sudden, it is quiet again. The clouds disappear and the reflection of the moon on the surface of the lake reappears; what a beautiful sequence! I could have watched this for hours. There are no words for this.

This very take, the end of the film, made me wonder where it would be best to see the film. Is it even a film, or is it video art? I watched it on my TV and I never felt so strongly about stopping the film because it felt wrong to watch it in my living room on a television. Five is an installation piece, not a cinema piece. To me personally, the film does not appeal to the communal, the “together” in us as film viewers. I truly believe that Five is a film that needs to be seen in a sort of dark room, alone, perhaps as a sort of event which allows one to walk (alone) from room to room, from screen to screen. The very last take, in particular, is not a cinematic piece, it is a call for experiencing the viewed, which would perhaps be done best with the help of huge, almost overwhelming screens. That would be my dream condition for viewing the film again, because it’s a wonderful film, simple, but so lovely. A real meditation in which I want to become immersed fully for the duration of just over an hour.

(If you like this blog and want to support it, you can now become a patron of The Art(s) of Slow Cinema. Check out my Patreon page!)