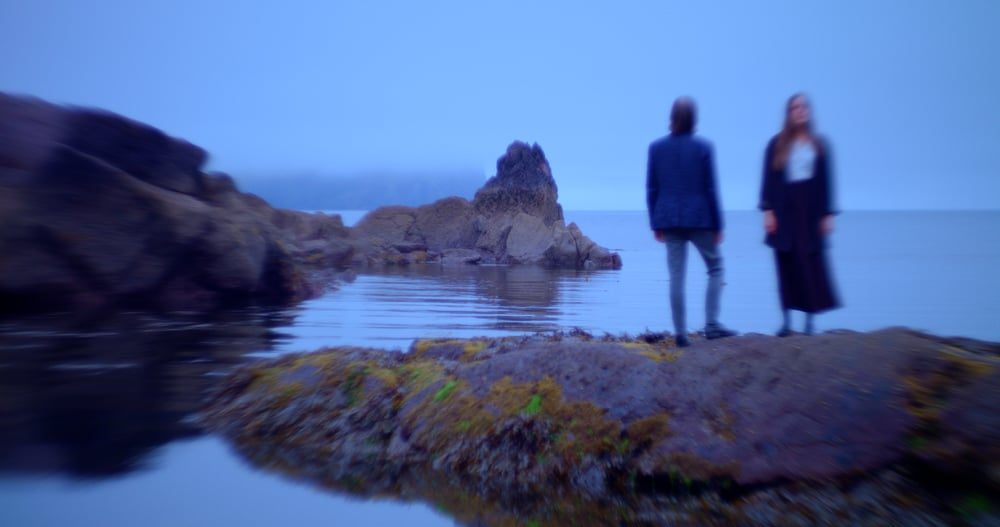 What happens if you plan to write a post on a film that you have been sent to, but find yourself at a loss for words? What happens if the film you have seen makes you think not only of the actual film but about what cinema is and can be? How can I put everything (and all this nothing) that is in my head into words?

Last year, I wrote an article on Straub-Huillet and pondered what “cinema” really meant. Does cinema necessarily mean moving images? Does it necessarily mean a progression of narrative? I came to the conclusion that the definition of cinema could and should be much wider than is sometimes the case. Phantom Islands, which will premiere next week in Ireland, also asked me to consider cinema rather than a single film. Rouzbeh Rashidi has created an experiential film, rather than simple a film per se. Regardless of what I’m going to write here, it won’t allow you to actually feel what the movie does to its audience. Rashidi’s work is complex, episodic, mysterious. It is asking you to think, to reflect and to be with him on this journey to Phantom Island. A physical journey, maybe. But, most important of all, I found that Phantom Islands is a journey through the mind, through the mind’s eye, perhaps even through yourself.

There is something that permeates the entire film and that didn’t let me go. It was Rashidi’s decision to blur most images to varying degrees. No image is fully clear. Neither is it completely blurred. Rashidi plays with degrees of masking, something that gives Phantom Islands a feeling of being exactly this: a phantom. The film, the characters, the scenery, even the music – all of this has a strangely unreal, surreal feeling. As if a ghost creeps up on you without it being a horror film. As if you dream. As if you merely imagine things in your seat instead of watching something that has been created for you to see. It is as if Rashidi puts mind images on screen. Phantom Islands is not a film as such. It is a collection of mind images, sometimes mere flashes of thoughts, sometimes more complex thoughts that take time to develop.

There are several instances in the film, when Rashidi uses quick cuts. The cuts come at an interval that is close to a blink of an eye. A bit longer than that, but still short enough to allow a comparison to my blinking eye, my blinking mind’s eye. This way of cutting made me believe that what I saw was happening in my head. It was a story that played out in my mind. I was the one who blurred the images because I didn’t have clear recollections of the past. This, too, is Phantom Islands: a blurring of the lines between what is and what isn’t, between what is and what has been. The film works like memory: it remembers, but it also forgets. It distorts, it blurs. It makes sense, and it doesn’t. What often remains are images that you’re baffled by, a narrative element that you try to piece together to form an entity.

What do we do to piece memories together? What do we do to keep a record of the past? We take photographs, one of the small but very important elements in Rashidi’s film. The woman protagonist takes polaroid photographs, interestingly showing the photo towards the camera so that we can observe how the polaroid slowly develops into a photo, a photo that nevertheless never really clears up. In the past, photography has been associated with death. Photographs as arrested images, as “killing” something in order to keep it. The photographs the woman holds in her hands appear to haunt us, them, the viewer when s/he walks home. It is one of those uncomfortable situation that makes you wonder whether what you see is not perhaps something paranormal. Here it is once more: the phantom.

It is this very nature of Phantom Islands that asks the viewer to engage in the process of filmmaking. Tarkovsky famously said that a good film should never be finished at the end of the editing process. On the contrary, it should start a new life once it is viewed by an audience. This is precisely what’s happening in and with Phantom Islands. Rashidi hasn’t finished the film. We are the ones who finish it in our heads, both while viewing the film and after. Through the film’s specific aesthetics, Rashidi positions us as the main actor/actress. He makes us believe that what we see happens in our mind. He tricks us, and in so doing, creates a very powerful experimental film that I would like to see again and again, because I know that there is so much to see, so much to discover, to explore. So many questions to ask, so many answers to give.

The next step on the Slow Ladder